Our Sunday leak afternoon is not over yet! Just when we were enjoying our first in-hand images of the impressive Studio Series Hot Rod, now we can share for you our first look at the new Transformers Studio Series 86 Scourge via an image from Cybertron Philllipines Facebook Group.

We have a slightly blurry image of Scourge in robot mode, but we are sure you will be highly interested in this modern rendition of Scourge. Very faithful to his animation design with great proportions and colors. The new Studio Series 86 line is sure getting the attention of all collectors by each new reveal.

Update: A better pic thanks to Protoman on Twitter

Not much left to say, click on the bar to see the mirrored image on this news post and then join to the ongoing discussion on the 2005 Boards!

It might actually be the very same toy, remember how all the early Hubcap reviews featured the copy with Brunt's gun in the middle?

I've thought about that too. Maybe each early reviewer does their video and then just sells it on to the next person who does their early review, and so on, and that's why the leaked figures often have the same issues even though pics and videos are by different people

It might actually be the very same toy, remember how all the early Hubcap reviews featured the copy with Brunt's gun in the middle?

Maybe it isn't a problem on specimens that didn't fall off the back of a truck.

That's what I'm hoping for as well.

Looks like TonTon's copy has the same issue as @PrimeVsPrime, with the face cover not being able to sit completely flush in vehicle mode.

I wonder if that can be remedied somehow.

Maybe it isn't a problem on specimens that didn't fall off the back of a truck.

Looks like TonTon's copy has the same issue as @PrimeVsPrime, with the face cover not being able to sit completely flush in vehicle mode.

I wonder if that can be remedied somehow.

Hoping to see the hopefully inevitable Targetmaster version sooner than later. Neat to have different versions of Scourges as Sweeps. 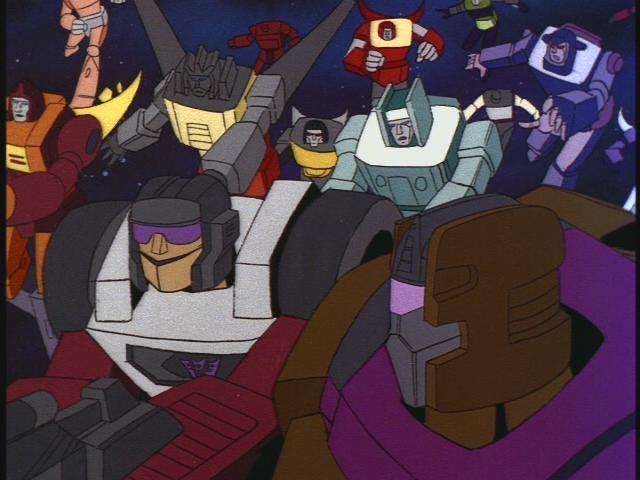 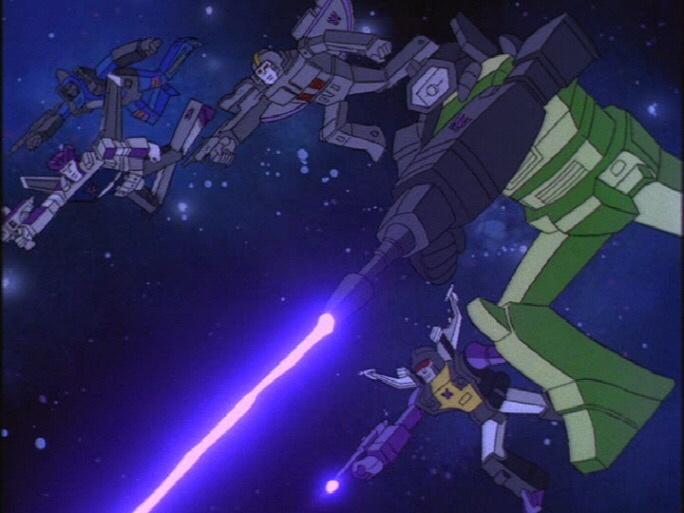 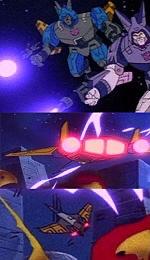 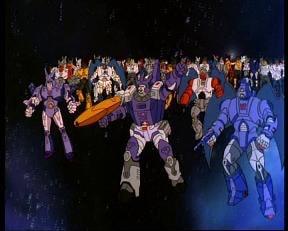 FFOD opens the door to seeker-izing Cyclonus and Scourge with color coded minions.

I think.. I think I'd actually buy that.

Kill it with fire. Who is that?

Thunderblast, from the Cybertron series.

Kill it with fire. Who is that?

I highly doubt they would make a Thunderblast as tall or manly.

Wow this thread is a train wreck lol

This is the part where I disagree. But I'll try to be fair.

Here's the thing. There are actually three parts to a transformer. The robot mode, the alt mode, and the transformation. Clearly, people who like fake parts don't care about this part of the transformation aspect. It's not the entirety of that aspect, but it is a piece of it.

However, if you have to fake the pieces, that is a compromise to the transformation, because you aren't using the parts that are intended to 'become' what they're supposed to. The hood to the chest, the front bumpers to the feet, etc. That was always the magic of transformers to me. Personally, I want those parts to be the same, because they're supposed to be. It comes down to a lot of people being perfectly okay with that compromise. But it IS a compromise. It's just one that is ignored because it doesn't bother a lot of people.

I get where you're coming from. It's zero compromise—-of either of the two modes. Which is all that you want, and that's great for you. It's rather big compromises in the transformation as I described above, of which doesn't bother you–also perfectly fine. It does bother me, but then I won't be buying this figure. Scourge, Cyclonus and Kup are fine with me. Hoping Blurr turns out decent. And we'll see what that Commander Class Rodimus looks like. Maybe I'll just grow the character up finally and have that be my ultimate 'Rod' in my collection.

I'm not going to speak for PA, but that's where I am coming from, anyway. Also because I feel like, it's 2020, and we probably can do a lot more if we push for it. Within budget, too. For Hot Rod, if you segmented out the hood (and with that one break-in-half in the hood already, segmenting it further wouldn't bother it in car mode) you could get the smaller chest. Think of those fenders that fold under the current hood that stores on the back. If chest and hood are the same, have those pieces keep small triangular cuts of the yellow that come away and fold under the hood that (now) becomes the chest, thereby shaping it properly. Have the front bumper also have a separate piece of the front hood, all of which clicks down and slides under the chest all the way up to the folded-in fenders, JUST enough to hide the yellow piece and shrink the bumper itself to a better size. You would have a proper-shaped, smaller chest that's made out of the hood, and really we've only added extra plastic to the fenders, and a small transforming mechanism in the bumper while removing the separate hood and its engineering. The empty body where those parts stored in the back would simply store from the front. You'd have to redesign the frame to let it fold forward, but they have plenty of history doing that with past Hot Rods.

Could there be more to it? Certainly. But knowing there could be other ways to do it, and they chose this way instead? Certainly it's a compromise. Designed to guarantee better modes without trying harder than they need to, sure. And if most people are cool with it, why would a company try that much harder to do it better with the real bits–even if they COULD do it within budget? But I think it's that "I know they could have" that stops me from going for a lot of fake parts. Sometimes they really, really can't. I don't believe Hot Rod is one of those times.

Personally…I really can't wait for WFC and the like to be done. For those few figures I'm still planning to buy, I'm DYING for some better-imagined figures with newer, more dynamic looks. Hot Rod could be one of them, so there may yet be a future figure that I'll finally call perfect–as you do with this one.

I apologize for being long. I've pretty much ignored these posts because I felt like there was no point, so a lot of what I've been thinking has sort of come out in one big post. Everyone can like what they like. I just pick the ones I want out of whatever they do.

EDIT: Of course, I post this in the SCOURGE thread (

) but that's where the conversation was, and while talking Hot Rod, I was speaking of faux parts in general anyway. Also didn't mean to derail. Scourge is definitely one I plan to buy.

That’s all fair and I don’t have an issue at all with your opinion. Everyone is entitled to an opinion. What bothers me is when people start assuming that everyone thinks the same as them and that we should all share the same opinion. You presented your opinion well and you’re allowing others to have their own opinion. So it’s all good.

I understand what you are saying and it’s a valid point. I get it. For me the magic of transformers is the engineering involved from switching from one mode to the other. It doesn’t matter to me if the parts are the same between modes within reason. I also mostly collect Masterpiece because I enjoy complex transformations. The more complex the better. And for me when you have fake parts for bot mode like MP-44 it causes the transformation to be more complex and therefore more enjoyable for me. But again that’s my opinion and people are free to not agree with that.

My main beef is someone saying that a Studio Series figure should not look accurate to the source material simply to make a more efficient transformation. That makes no sense and goes against the entire point of the line.

I’m bowing out of this thread to gawk at the glorious MP Starscream V2 pics with his fake parts robot mode canopy in all its glory! I’m sure a lot of people are upset that it’s not the same as the jet canopy, but again they put the real one right behind the fake one in bot mode so you can still see the pilot chair etc. Engineering genius to me! Cheers!

I'm not going to speak for PA, but that's where I am coming from, anyway. Also because I feel like, it's 2020, and we probably can do a lot more if we push for it.

Yes, that is where I am coming from, though you may actually feel stronger about this than I do. I even said in my original response that the SS Hot Rod may overall be the best Hot Rod figure we have gotten yet (I will buy it, and I won't decide until I have it in hand)

When I "judge" a Transformer toy, I initially view it as if it were a completely new character with no ties to existing media. This is obviously easy with characters that are actually new, but those are fairly rare these days. If there are things about the toy that seem "off" or don't make sense when considering the toy in that context, that is a knock against it. Fake vehicle kibble, weird transformation aspects, etc. all go into this category.

I then consider how well the figure captures the essence of the character it is supposed to represent. For some, this begins and ends with "cartoon accuracy" but I take a different approach. With most of the core cast, there have been so many iterations of the design (even within the pure G1 context) that there is no definitive version. Even within the cartoon there were differences from episode to episode and even scene to scene. Those who accept only the cartoon as the definitive version obviously did not buy their first Transformer toys before the cartoon came out, as I did, only to be a bit disappointed when the cartoon offered such simplified designs. So while I loved the cartoon for what it was, I have never held it to be the One True Source for all things about the character. I also read the Marvel comic book, which had a different take on the characters (and even more varying designs as the series went on), as well as the box art, tech specs, and other things. There is no One True Source for G1.

For example: My first Transformer was Jazz. He has door wings. Period. The cartoon was wrong, and I will die on that hill if need be, but I will take you down with me.

In the end, it's just silly to me to call something "perfect" when there clearly have been compromises in the overall design to make the figure match the cartoon design. It can still be a good toy, even the best version of tht character we have had, but it cannot be "perfect".

And yet, some people get really on edge when you dare to present a differing opinion, and then go on to accuse you of the very behavior that they are exhibiting.