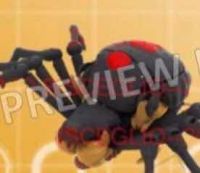 A new image has been showing up over the internet revealing what seems to be our first look at War For Cybertron Kingdom Blackarachnia beast mode.

This week we had seen some possible Kingdom leaks from 4chan, and we had a look at Kingdom Blackarachnia’s robot mode. Now we have a small pic showing her spider mode. While the image is not so clear, we can see that the spider looks proportioned and integrated in nice black with some red spots. As usual, take this with a grain of salt until we get an official confirmation.

Check out the image attached to this news post and then join to the ongoing discussion on the 2005 Boards!

Fair enough. Do you have anything to kick us off?

What kind of ideas?

Are all of us out of ideas? I'm bumping it so it can be found.

What kind of ideas?

Are all of us out of ideas? I'm bumping it so it can be found.

Waspinator finally tracked down Starscream and killed Starscream, reason? Years of abuse including possession in Beast Wars, and being used as a puny Targetmaster gun in the Thrilling 30 Starscream deluxe toy.

Just bought a Kingdom Waspinator for myself. He is much better in person compared to pictures. Still don't like the purple on the wings and eyes.

Laser Eyes was really bad for his vison.
View attachment 29469066

You ask for miracles. I give you… John Warden. Not only was the man dropping hints about the return of Beast Wars as far back as 2017, but he dropped a hint about Legacy back in 2020.

Rachel: So, we actually started ideating Legacy several years ago, while John Warder was actually still on the team.​

Q: With the success of the G1 reissue line, are there any plans to reissues toys from any other lines like Beast Wars, Robots in Disguise or the Unicron Trilogy?
John: Absolutely. When you look across our franchise, you've got great Beast Wars characters…
Ben: Careful what you say, John. But yes, the answer in short is yes. We have lots of great anniversaries this year, next year and for the foreseeable future.
John: Even in Cyberverse, right? Beast Wars characters are there. You've got Unicron Trilogy. Yeah, so Gen Selects is a good opportunity to put Cybertron Defence Hot Shot in there, totally random. But there's some other great characters from Armada. You know, I'm a big fan of the Armada Starscream. Awesome characters. Different personality. Really cool alt-form. And a whole generation of fans grew up with it. So I mean, that's the cool thing about working on. I like making new stuff, but there's so much cool material you can draw from.
Ben: And I think that's the balance of what we've had fun doing. When we have a chance to bring some vintage with the actual G1 reissue toys, we've reimagined a lot of G1 characters, we're starting to bring Beast Wars characters, starting to bring others whether it's Armada and all of that, kinda into this modern universe and that's equally as fun. We're seeing a lot of teens, tweens, like "wow, this is so cool", and they have no idea of the original source material for those characters when they first get in, but then they dive in, they figure it out, and now they're introduced to whether it's Cybertron, Energon or Prime.
John: I remember when I first came onto this brand many, many years ago […] I was a G1 kid, I grew up with G1. I read the comics and I watched the show. I'd just got off watching the new movies from Paramount, so that was my knowledge. I knew about Beast Wars, knew about some things, but it wasn't until I really got in there, started to talking to people at San Diego, at other conventions. You see the passion in people's faces when they talk about the Armada Trilogy, they talk about the Bay Universe, and you get energised from that. You realise, like when I started, I went back and started watching all these old […] and I fell in love with it. And it's crazy, you understand why people love Dinobot so much. And it's like, you feel it. And I think that's the magic of working on a brand like this. Just like the brand, the characters convert, they transform, it has a way of transforming you.​

Terrorsaur: These guys always know where there is fresher meat than the Butchers.
View attachment 29458883

I'm slowly starting to run out of ideas.

IS this the Buffet line for fresh seafood?
View attachment 29449251