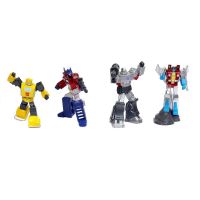 Autobots vs. Decepticons in a box! These highly collectable, stylized Transformers G1 Optimus Prime, Bumblebee, Starscream and Megatron as 2 3/4-inch tall die-cast metal and plastic figures recreating an epic battle scene! The superior paint quality and craftsmanship are staged in dynamic poses and ready for action!

Megatron's arm is super whacked up.

another of those \"nah I don\'t think I need this\"

but in actuality would buy if I saw it in person…

So cardboard & plastic diorama pieces with bonus mini-figures. I'd literally only be interested in this to use the packaging with my Legends class figures. My young cousins would probably enjoy the figures …

Looks like the old Titanium 3-inch figurines but lamer.

It looks like the box art with Metroplex in the background, but on first glance the pyramid thing in the foreground made me think of the old vintage Transformers Activity Center from Warren.

If it actually came with a set piece, id be interested because i could use it for other figures. Still tho, was not expecting this kind of stuff.

At the price and knowing Jada, the silver platform with Optimus is likely plastic and included. Their accessories are generally pretty good and have more longterm resale value than their figures.

Cute but a big, fat pass.

Neat, will pick one of these up.

Looks like Robot Heroes 2.0. Different aesthetic, but roughly the same poses as the ones from 07-08.

In the tradition of G1 Broadside.

Who is Megratron??  Check your spelling Jada!!

If it actually came with a set piece, id be interested because i could use it for other figures. Still tho, was not expecting this kind of stuff.

Not only is Bumblebee the runt, but he’s the only one unarmed as well.

Is this the triumphant return of Titanium Series?