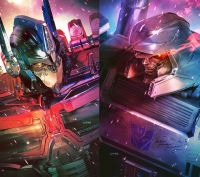 East Side Comics serves up pre-sale news you can use to acquire their exclusive John Giang variant covers A & B for issue #1 of Transformers ‘84: Secrets and Lies.

Enjoy the full cover artwork attached to this post, then sound off on the 2005 boards!

East Side Comics on Instagram: “We appreciate your patience and understanding! Be safe out there!”

john giang on Instagram: “just a bit of news to share, if ya haven’t heard already. thank you so much ahead of time everyone for all the patience and pls stay safe!…”

i really like these, part of me wants to get them for the covers alone

These designs are so frikkin' cool.

Prime reminds me of RID01's Optimus, and Megs looks pretty awesome as well.

Megatron’s helmet looks way too big for his head; otherwise, I really like these designs

Why are you yelling?

Would love to see movie bots – Prime – look like this.

Look at prime picture closely if prime look like that most people will say prime is g1 looking enough prime in cartoon big boring blocky in this picture he have detail on his back, some extra detail on his upper chest that takes away from his generation one look , armada prime, energon prime,

Do you fans actually think if transformers look very cartoony looking from cartoon that will bring in new fans to like transformers if that where true bumblebee movie would have made billion easy but maybe new fans who like realistic looking stuff not cartoon looking stuff saw bumblebee trailer bots look to cartoony not realistic enough from 2007 movies did show.

Revenge of fallen how many people who live in real world say they see green giant construction vehicles no one that looks cartoony unrealistic if devastator in revenge of fallen look like he did in cartoon do you really think and believe new fans who do not read, do watch cartoons, do not buy toys will like look of devastator as giant green transformer with purple hands and all his vehicles look purple and green I will say not if that was true bumblebee movie will have made billion easy and transformers movies would not have to depend on new fans to see both transformer movies make billion back to back easy,.

Name movie series that have had made billion back to back sequels I can not think of one unless avatar two is able to do it Star Wars didn’t do it iron man, Thor , avengers did not do it

Anyway, it's criminal that we can't even see as much of Megatron as we can of Optimus when we full-body shots of both would be amazing

They remind me of those \"Space Cobra\" or other amine (like Gachaman) that have been made in a sort of 80\'s style \"airbrushed photo-realistic\" style.

And I bloody love it.

I just want to see full body shots of these designs. They look so interesting and different.

Looking at what we got giving Megatron a Roman Centurion like helmet really suits him apart of just the German bucket-head we've been accommodated to. If it's even possible I'd kill to see the whole thing.

I think there is something even much more cooler in these designs–I think it's in the eyes, and the areas surrounding them. It's just jaw-dropping for me. And the entire designs coalesce with that unique design around the eyes; one that is not so unique as to be unrecognizable, but one that only a true artist can extract out of a design we do overall know, that only a genius artist who can see where lines and shapes could form where the rest of us would not. Wow. Cheers John Giang. We should be so lucky to have a movie series as designed by you!!!

I just learned that John Giang designed Shredder from the last reboot. I loved that design.

These are so damn epic-looking. It's awesome that they're being used for '84.