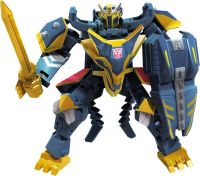 The end of Cyberverse Season 2 left the heroic Autobots traveling back to Cybertron. They finally arrive home, ready to restore Cybertron… but nothing good awaits for them this time. The new season will debut this spring on Cartoon Network.

In the third season of Cyberverse, Bumblebee and the Autobots encounter mysterious new threats and unlock the ancient secrets of Cybertron as they continue their adventure to bring their planet back to life. After winning a new battle against the Decepticons, Bumblebee and the Autobots begin to rebuild Cybertron. But things are not what they seem, causing the Autobots and Decepticons to join forces to fight a new enemy. Unlikely alliances will be formed, new legends will be made, and new heroes will emerge as the war for the Allspark comes home.

But there’s more to share with you! Via Collider.com we can also share for your several concept art and renders of new Cyberverse characters and toys. Among the new characters we have (some of them with toy renders: Hammerbyte, Thunderhowl, Iaconus, Wildwheel and Meteorfire. To top it all, we have our first look at some new toys for Optimus Prime, Bumblebee, Megatron and Starscream. We are sure we will see more about them at the upcoming Toy Fair 2020.

Check out the trailer below and all the mirrored images after the jump. Then, let us know your impressions on the 2005 Boards!

these "recycled characters" are the cash cows …. especially op and bee…. at the end of the day, its just business after all …

It may be to complex of an argument to get into now, but lets just say I rolled my eyes at two very similar Armour-up Bumblebee toys in quick succession. I don't mind them making Bumblebee toys as such (he is technically the star of the show after all) it's just that they need a bit more creativity in what they do with them – it's getting to the point that if I do buy them they don't get much play as they can be a bit low effort.

I'd rather they don't down the sheer volume of releases of some of the characters and at least considered making a half decent Wheeljack, and any kind of Perceptor or Chromia at all. They seem to be making Prowl toys based more on his name than on his importance to the show too.

The endless recycling of the same characters is getting tedious now.
Especially when they still have not made a Chromia toy of any kind.

these "recycled characters" are the cash cows …. especially op and bee…. at the end of the day, its just business after all …

@Robbot Can\'t say I based the design on this one, but it is indeed very cool.

Bumblebees vehicle mode reminds me of the main characters vehicle from the anime Redline. Its very cool.

I don’t think 1980s Unicron is bad though. But I do think IDW, Prime and movie Unicron are bad.

I Hope we get a Cyberverse Unicron in the cartoon & toy line.

I Hope we get a Cyberverse Unicron in the cartoon & toy line.

Funny thing- CounterShade there (Mighty No. 8) was voiced by Steve Blum, who also did TFP & RID’15 Starscream.

Funny thing- CounterShade there (Mighty No. 8) was voiced by Steve Blum, who also did TFP & RID’15 Starscream.

I am FEELING that Cybertronian Starscream altmode. Way cooler than the tetrajet, kind of reminds me of Battlestar Galactica in a very good way.

Also, I hope Wildwheel is the breakout character everyone here seems to want him to be.

Is it just me or Starscream looks like a Mandalorian starfighter?
Kom'rk-class fighter/transport

Gradius Starscream might just be my new favorite alt mode for him.

The endless recycling of the same characters is getting tedious now.
Especially when they still have not made a Chromia toy of any kind.

She's getting a Tiny Turbo Changer.

for some reason i thought thunderhowl was a decepticon…

really like starscream's cybertron mode and really hoping for a wildwheel figure. i really dig his 'good, bad, and ugly' look

Is wildwheel our first cowboy based robot design?? I love it

Archadis might count, even if it doesn't have the hat.