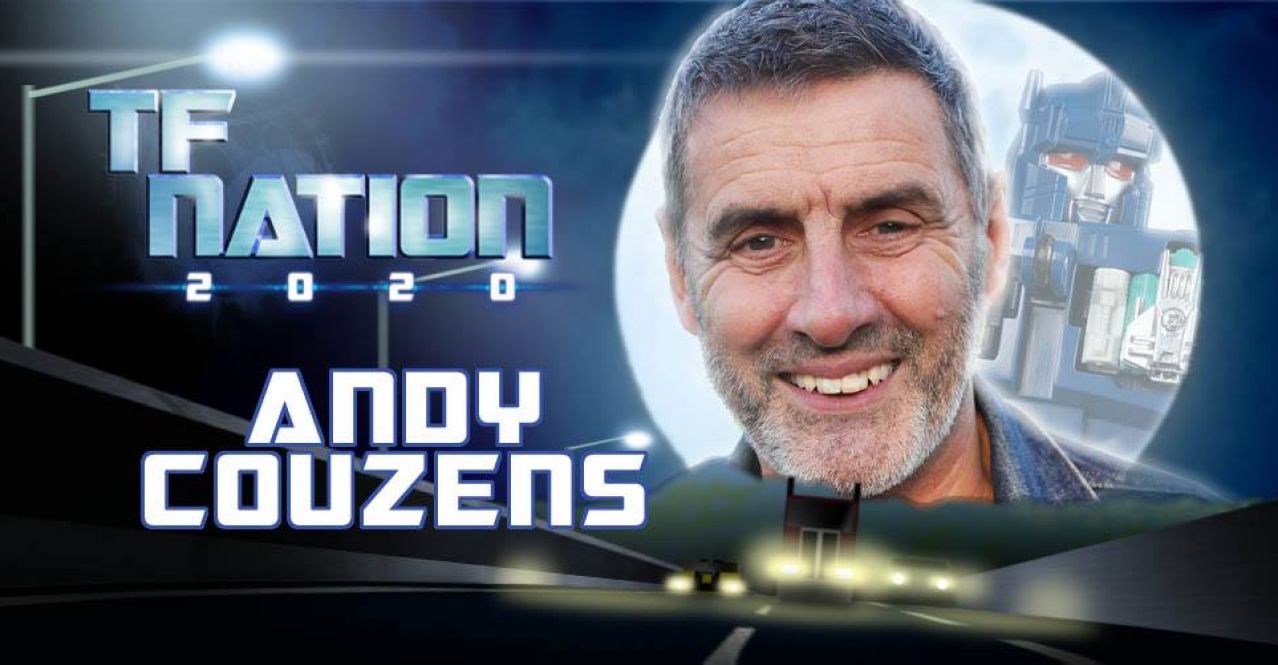 Couzens has been involved in toy design and production since the mid 1970s, working on preschool development for Kiddy Craft. He then moved over to Milton Bradley – the earliest distributor of continental European Transformers toys – and to the new position of Senior Designer and playing a crucial part in the development of childhood staples Playskool and Robotix, whose key features he had a significant hand in designing. As of 1984, with Hasbro acquiring Milton Bradley, Couzens retained his position, and was later promoted to Group Product Manager for research and development in the unfortunately termed Boys Toys section, before becoming Category Development Head of Boys, Girls Toys and Creative Play sections for Hasbro Europe!

Scheduled for August 14-16, 2020, the convention happens at the Hilton Birmingham Metropole and updated information about Ticket Release Day on February 15th, 2020 is available here.

Don't forget, the most bad-aft version of Arcee will be present at @tfnationltd this year, too!

Well we opened up sales for TFNation 2020 less than a day ago, and what a day it was! A little false start due to some unexpected technical issues, but thanks to the techbots hard work it was fixed and we were off to the races.

Now we’ve all had the chance to get a good night’s sleep and recover from all the excitement, it’s a good time to see where we are.

Leader Tickets – well you’ve been telling us for a while you were keen to see Peter Cullen at TFNation and didn’t you all just show us how keen yesterday as all our Leader Tickets have now sold out. We appreciate not everyone was able to get a ticket as these were limited. However, Peter will be on stage on both Saturday and Sunday at the event.

Hotel Rooms – demand for rooms is always high and this year was no exception. We have sold out of our room allocation for this year. If you still want to stay at the Hilton, they may have rooms available outwith our allocation. We suggest you try to book directly through their Honors rate- this is a special room rate reserved for Hilton members, but it’s absolutely free to join! If you’re not already a member, you can sign up at https://www.hilton.com/en/hilton-honors/join/ .
In the event they have no rooms available, the NEC area has lots of hotels within a short distance of the convention, including the newly finished Hilton Garden Inn on the doorstep of the airport, and Moxy Hotel outside the convention venue. Please also check out our Stay22 map for further alternatives- https://tfnation.com/location#alternatives.

We hope to see you all in August at TFNation 2020, where all are one!

TFNationals, We are now scaling back our support crew to normal levels. The techbots are on charge for the night, whilst the humans require some kind of Energon. Thank you for your support today. We can't wait to welcome you to TFNation 2020! – TFN Crew

why is it when i log in and go to buy tickets i can't see the option for leader packages?

Edit: F— they sold out already?

IMPORTANT! 2020 Tickets have been taken offline whilst we look into the issues. Please check our social media feeds for updates

TFNationals: The Tech bots have come back to us, having identified the issue. We are resolving this now and will return to you shortly with an update.

TFNationals: We shall be reopening ticket booking at 1:30pm GMT. (in 30 minutes) We will of course monitor this to ensure the tweaks have taken effect. Thanks for understanding – Team TFN

My body is ready…

The new site is up and whilst we will take it down a little later for a final preparations you can now log in and update a more of your details.

This isn't part of the Leader package, but an optional extra at additional cost. If you opt in for one of these you will recieve one pre-signed by Peter Cullen. The ones included in the package will be different and unsigned.

The INCREDIBLE @EdPirrie has just levelled up. Lines AND colours?! He's one of those artists whose Transformers just look and feel RIGHT. Would love to see him on some official IDW Publishing output someday. What a talent.

I'm not sure what previous work he's referring to being ripped apart on these forums? I guess I missed that? Was it for a previous convention? Sounds like whatever the criticism was felt quite hurtful to him which is a shame to see. Hopefully he sees it's not all bad on here.

Either way I think this Optimus piece looks really great tbh and I'll definitely be getting one once they're on sale.

My god…. That's just sad. What artist searches forums discussing his art and actively looks at the negatives and thinks its "ripping apart". Its called criticism mate. You may be proud of it, but that doesn't mean others are. If the people are blatantly blasting it, ignore it, don't fucking dwell on it and make public twitter posts on it.

Thanks for all the love and support for the Optimus Prime piece! Although my sarcastic tone seemed to be completely missed; I don't think it sucks. It was a wry dig at the fact the last time work I was proud of was revealed by TFN it was ripped apart by A Certain Forum.

He didn’t voice anyone in it, why would it be on there?

I didn't think about that, very good point.

Heh, he used the MPM4 as reference, cool.

Kind of a shame the Unicron Trilogy isn\'t on there.

He didn’t voice anyone in it, why would it be on there?

That looks too saucy to pass up

Kind of a shame the Unicron Trilogy isn\'t on there.

That would be funny, if it weren't so sad.