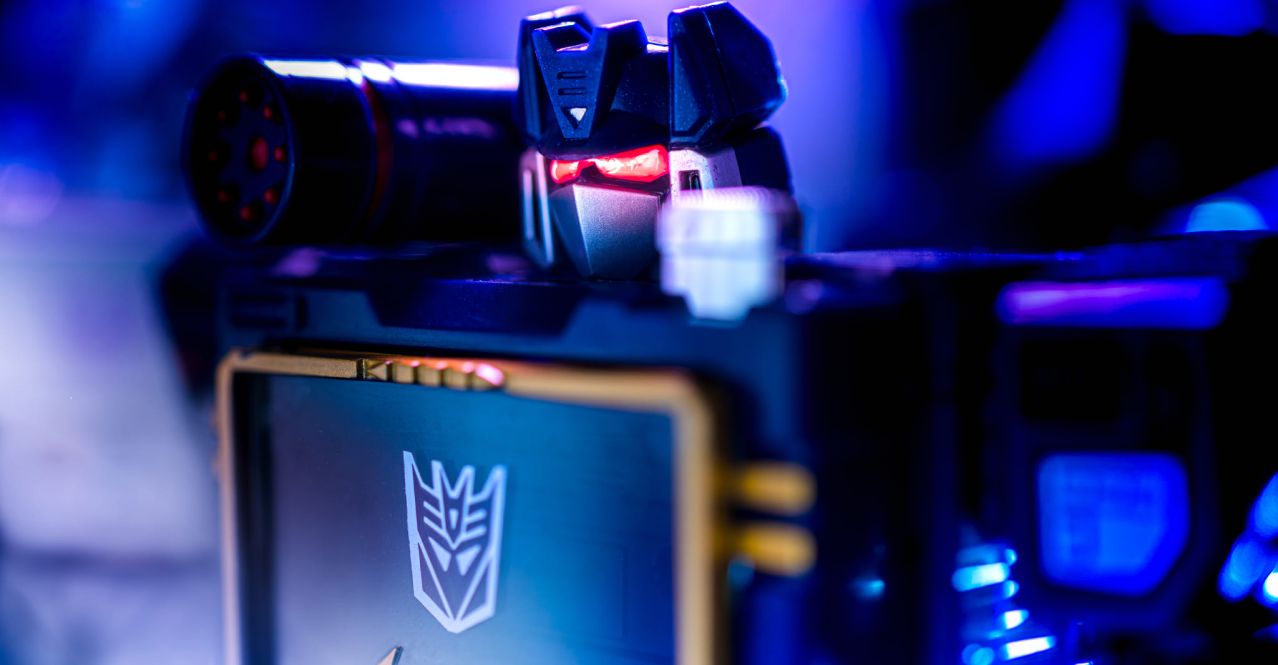 Laserbeak, prepare for flight.  Destination: Iacon.  MP-13 Masterpiece Soundwave, a classic figure at this point capturing the Decepticon Communications officer perfectly in this scale has been re-issued in 2019.  While the intent is nothing major was to be changed, there were actually some differences that wound up separating this release.  First off, the box has new Long Life branding, so you should be able to tell you’re getting the newer edition right off the bat.  Once you dig into the figure, we have some slightly darker blue plastic going on, which I actually think looks a bit better.  His red eyes, matching the toon look – painted on with a dark under coat, the previous was red translucent plastic.  There are also some very slight color changes in highlight paint throughout.  All the original accessories come with – Megatron gun, Energon cube, chest display, hand scanner, Laserbeak and cassette case, & battery gun.

I found handling a bit more difficult than the original release which I still have out on display.  The hip ratchets for forward/backward movement are VERY tight, to the point of concern while posing.  Other than that though, it’s roughly the same.   You can definitely tell the mold has been through the ringer, it’s not as smooth or clean as it once was, but if you never had a copy and dig this slightly different look, he is probably worth a pick up.

We’ve run the new version through a gallery, read on to check some key shots or hit the gallery below to see all 70+ HD pics including comparisons with the original! 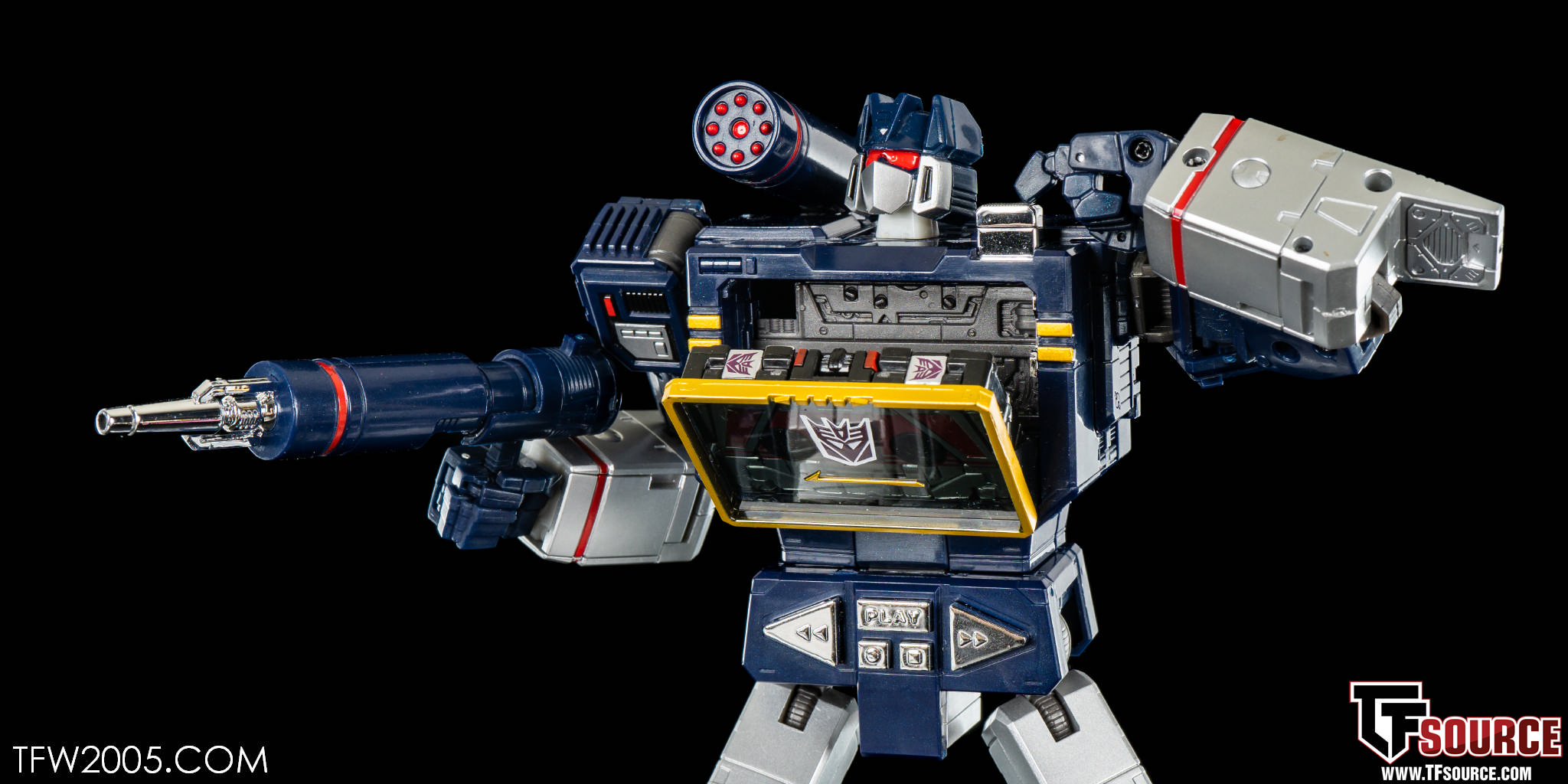 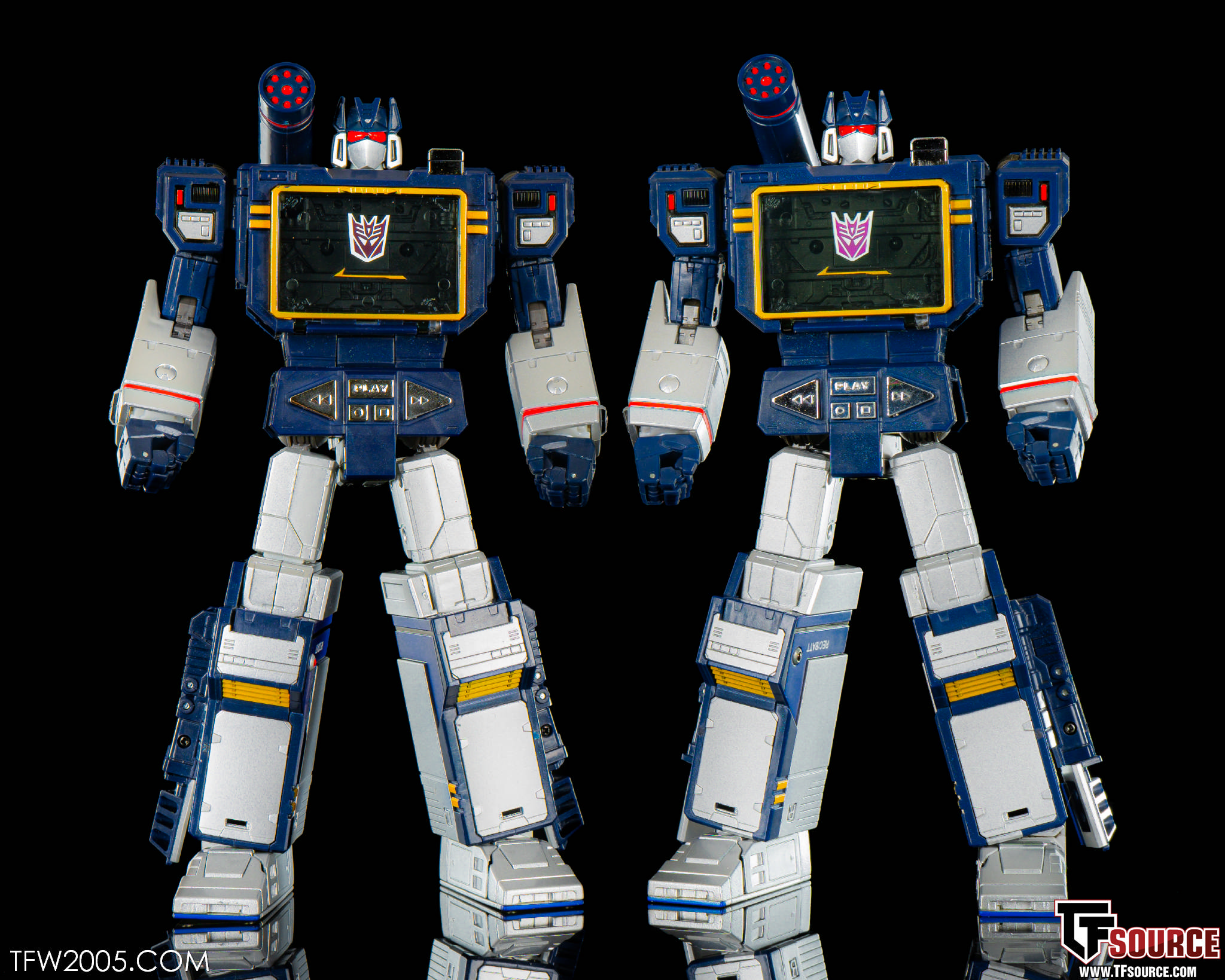 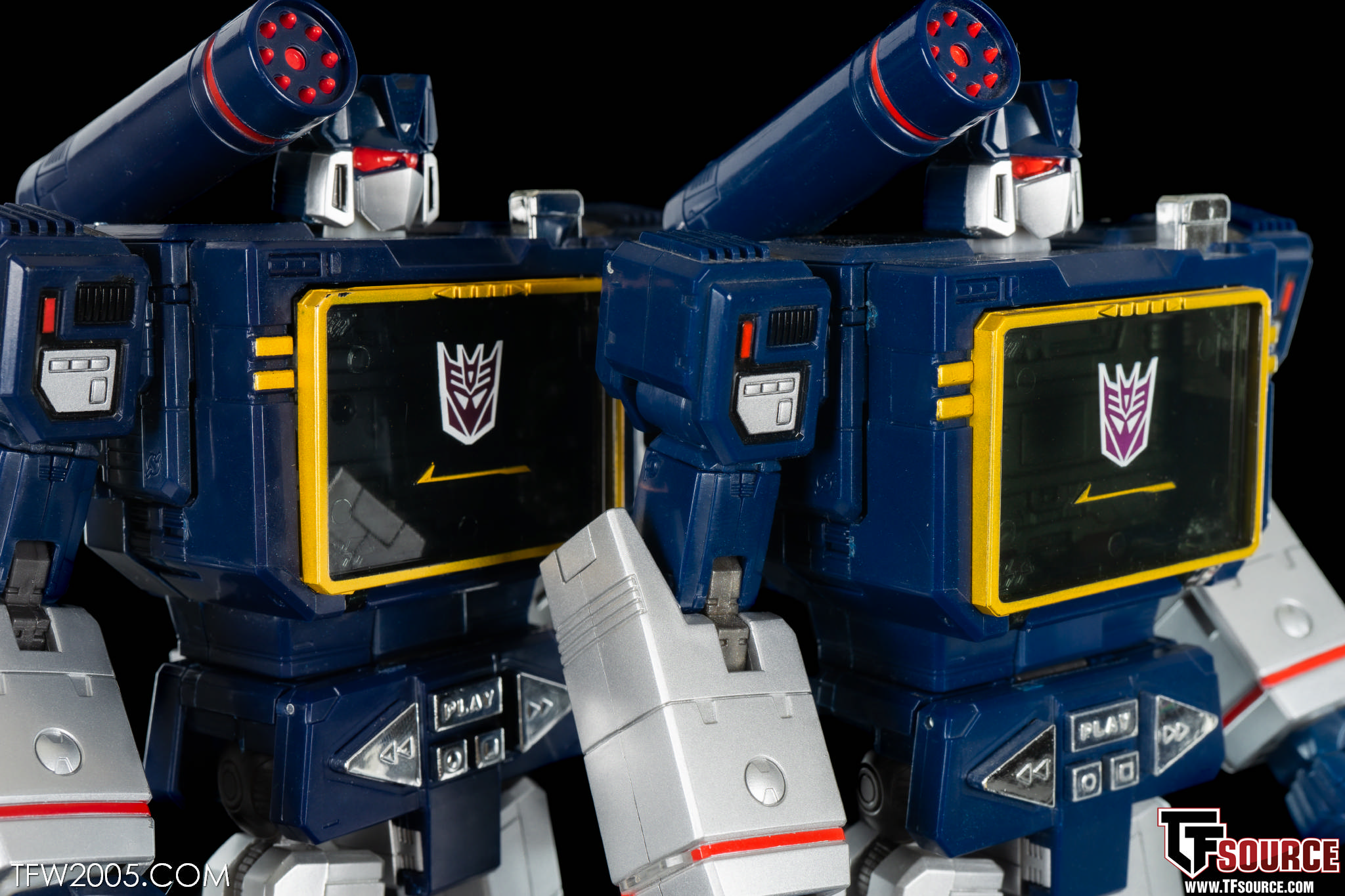 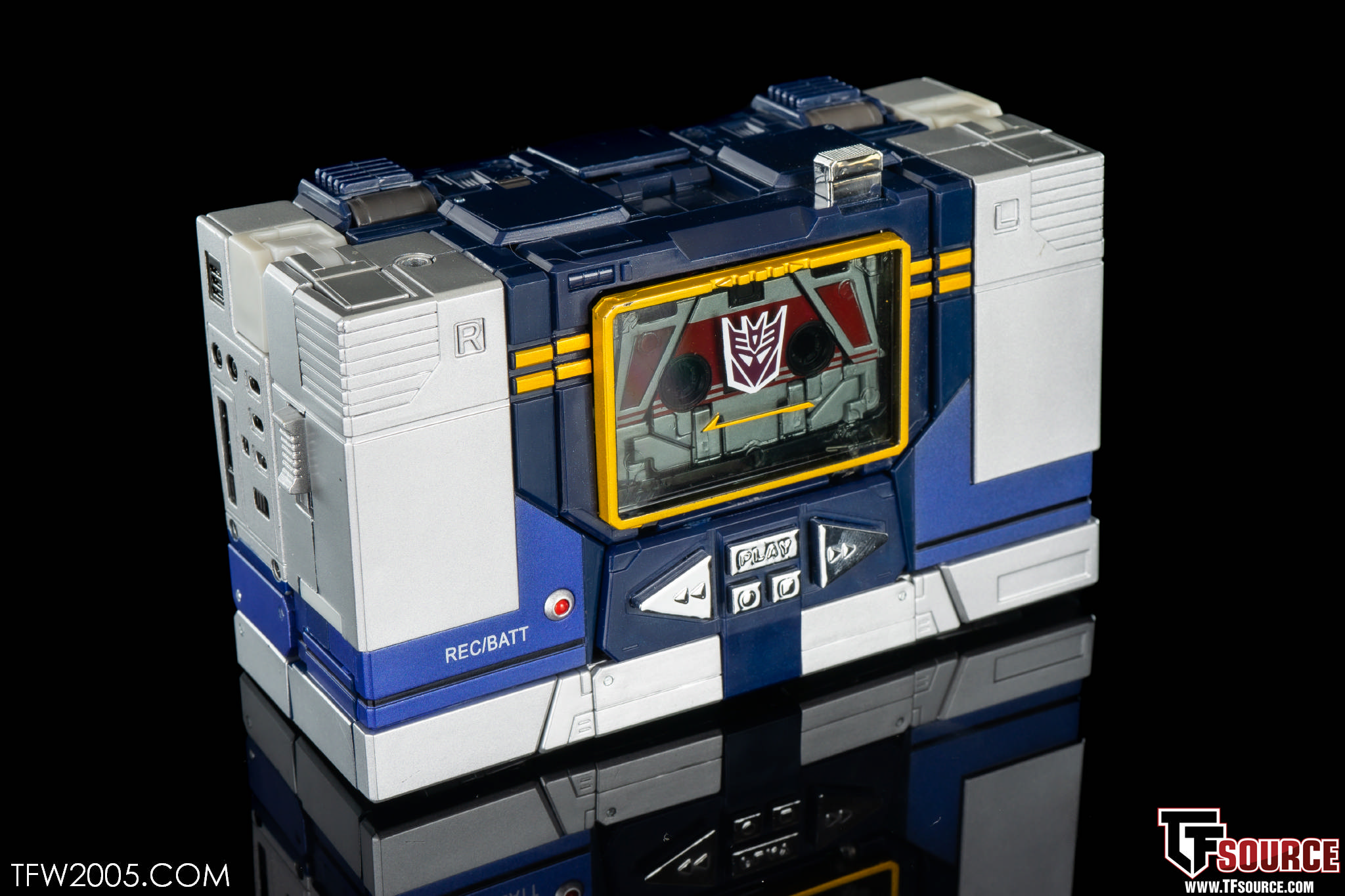 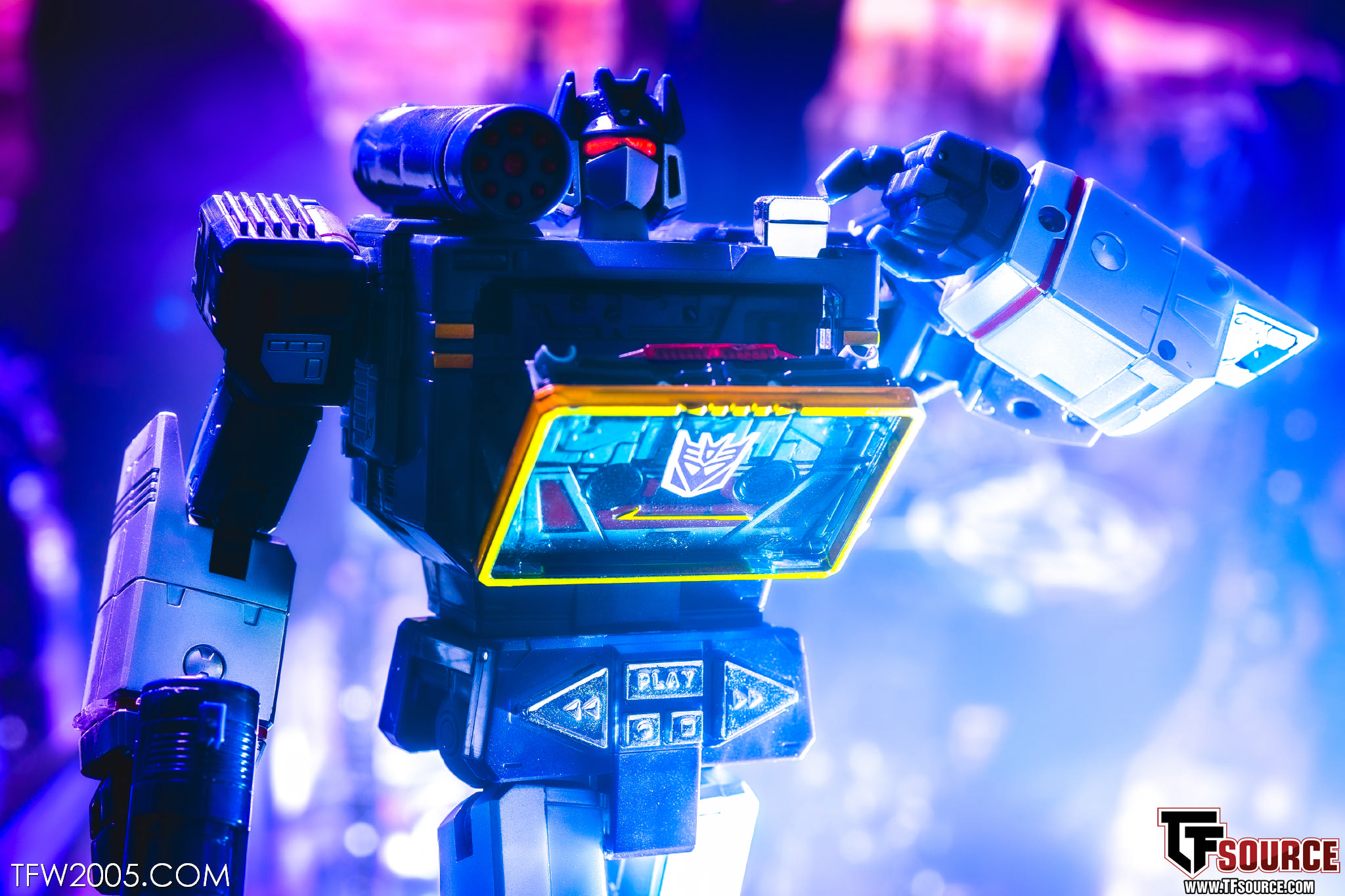 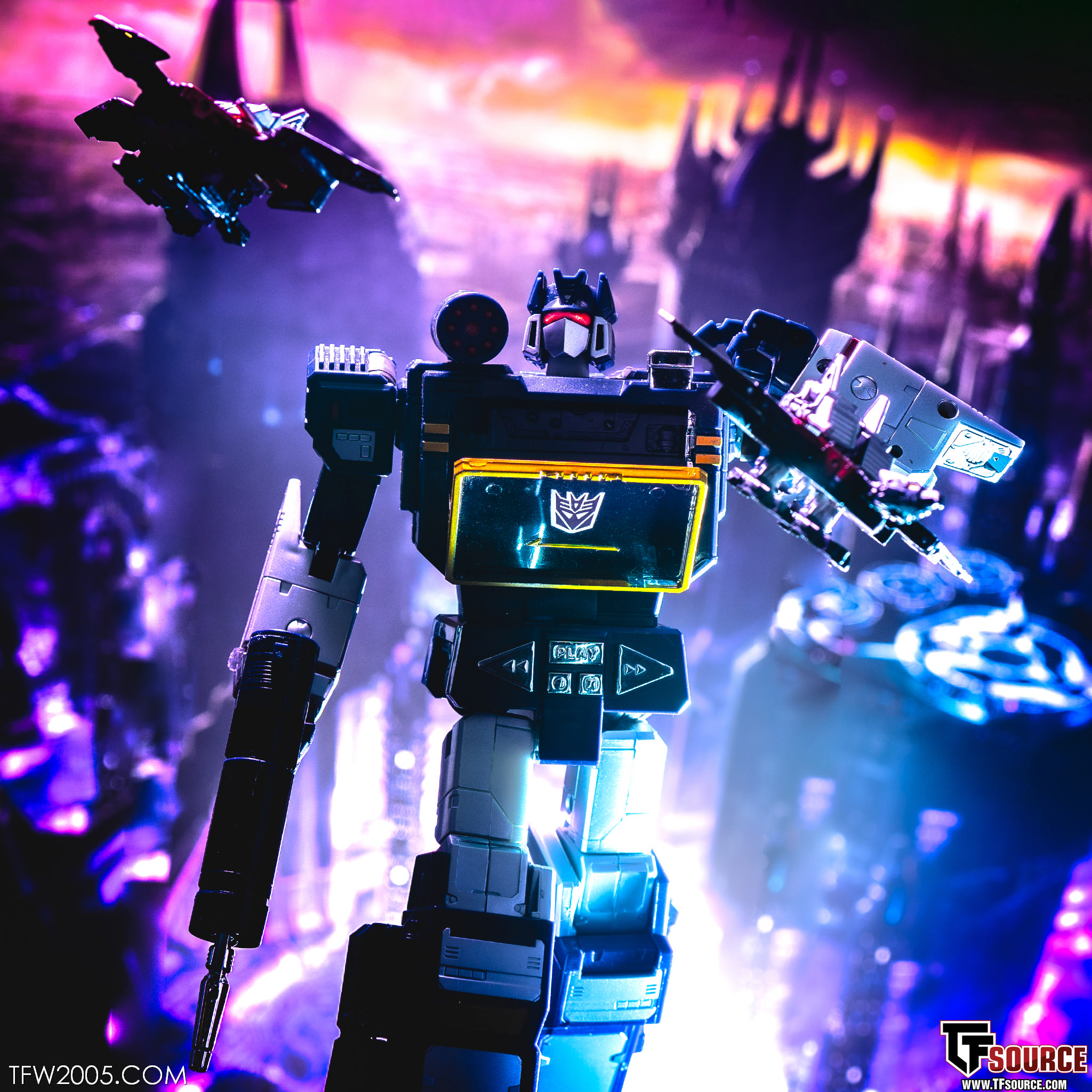 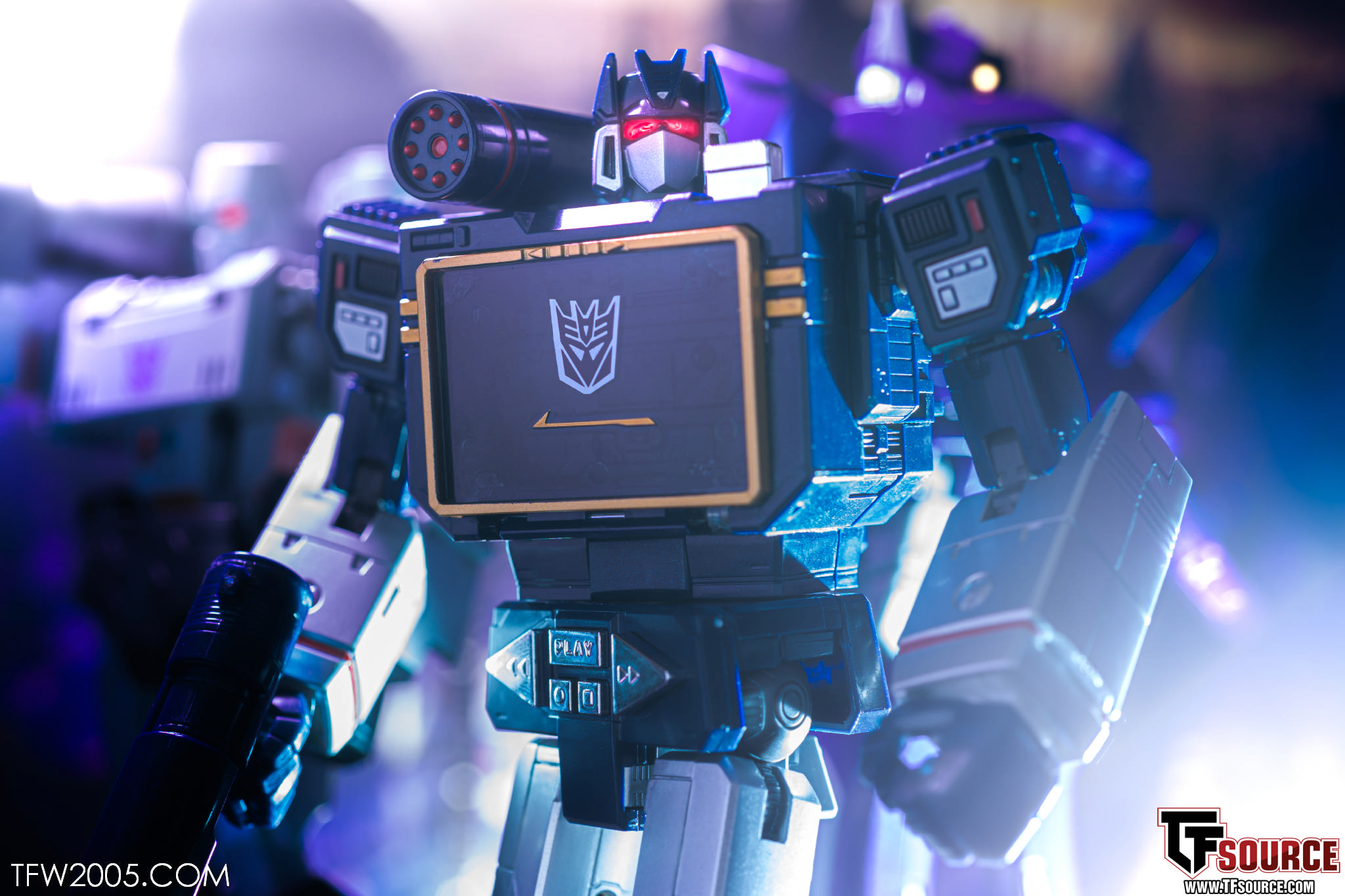 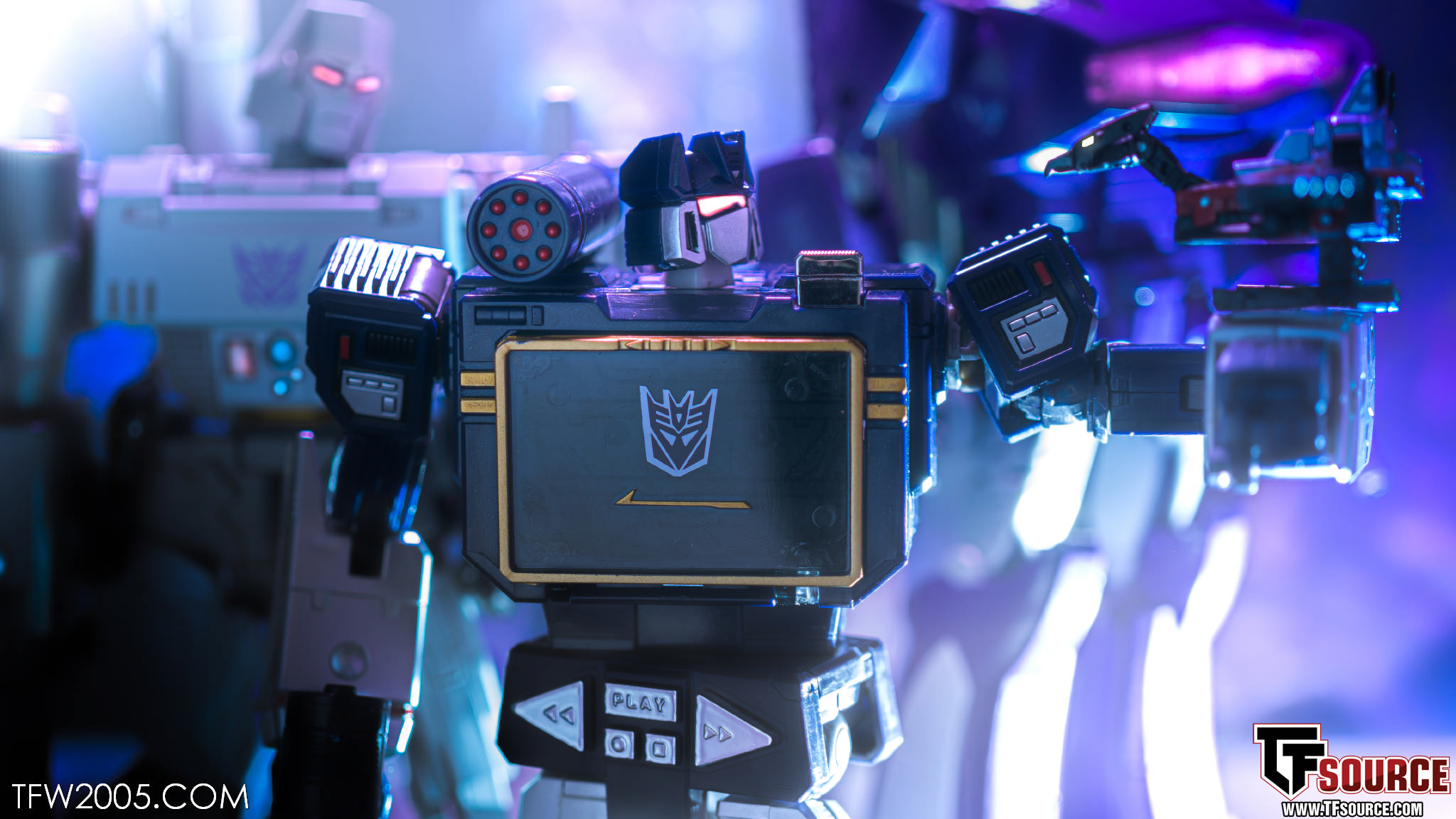 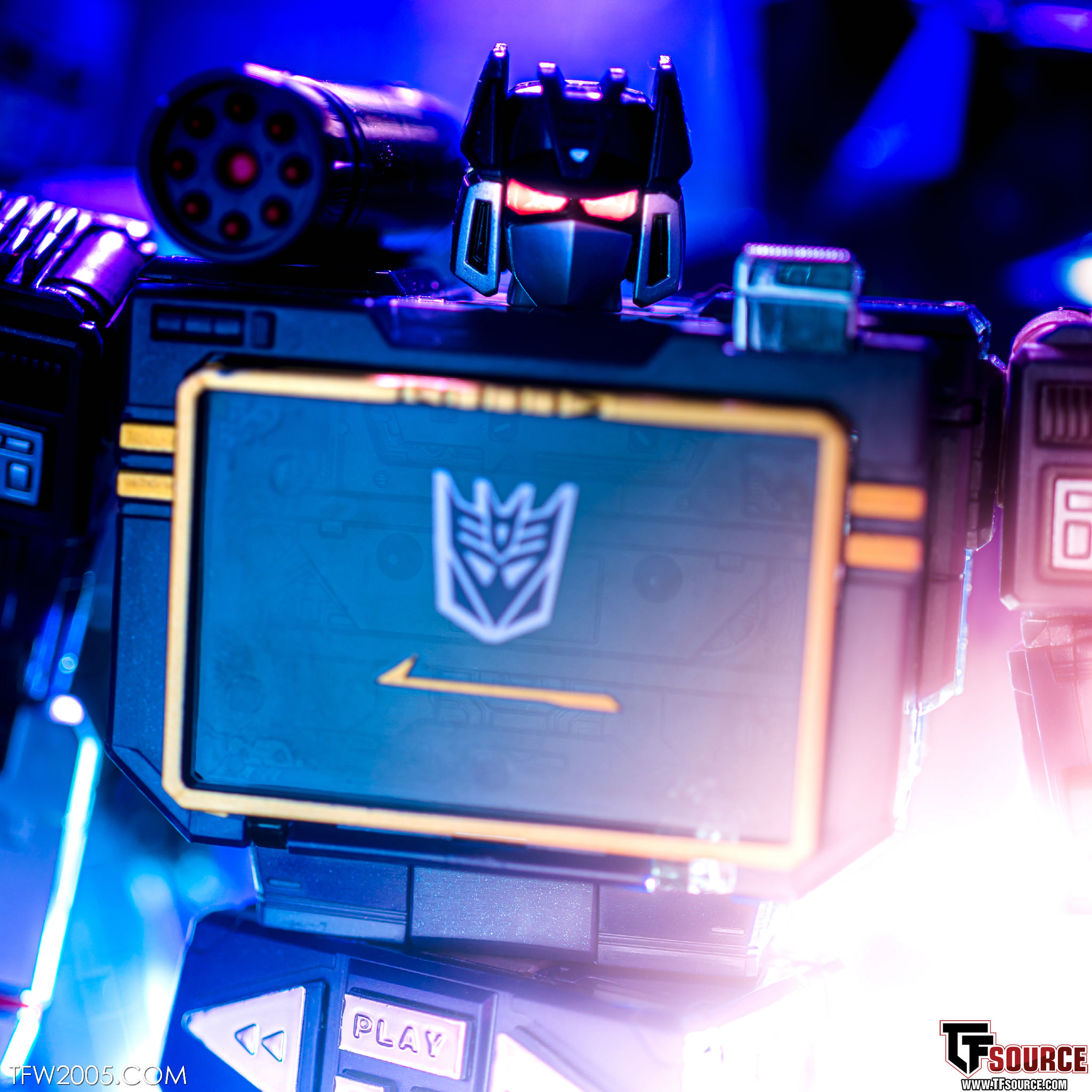 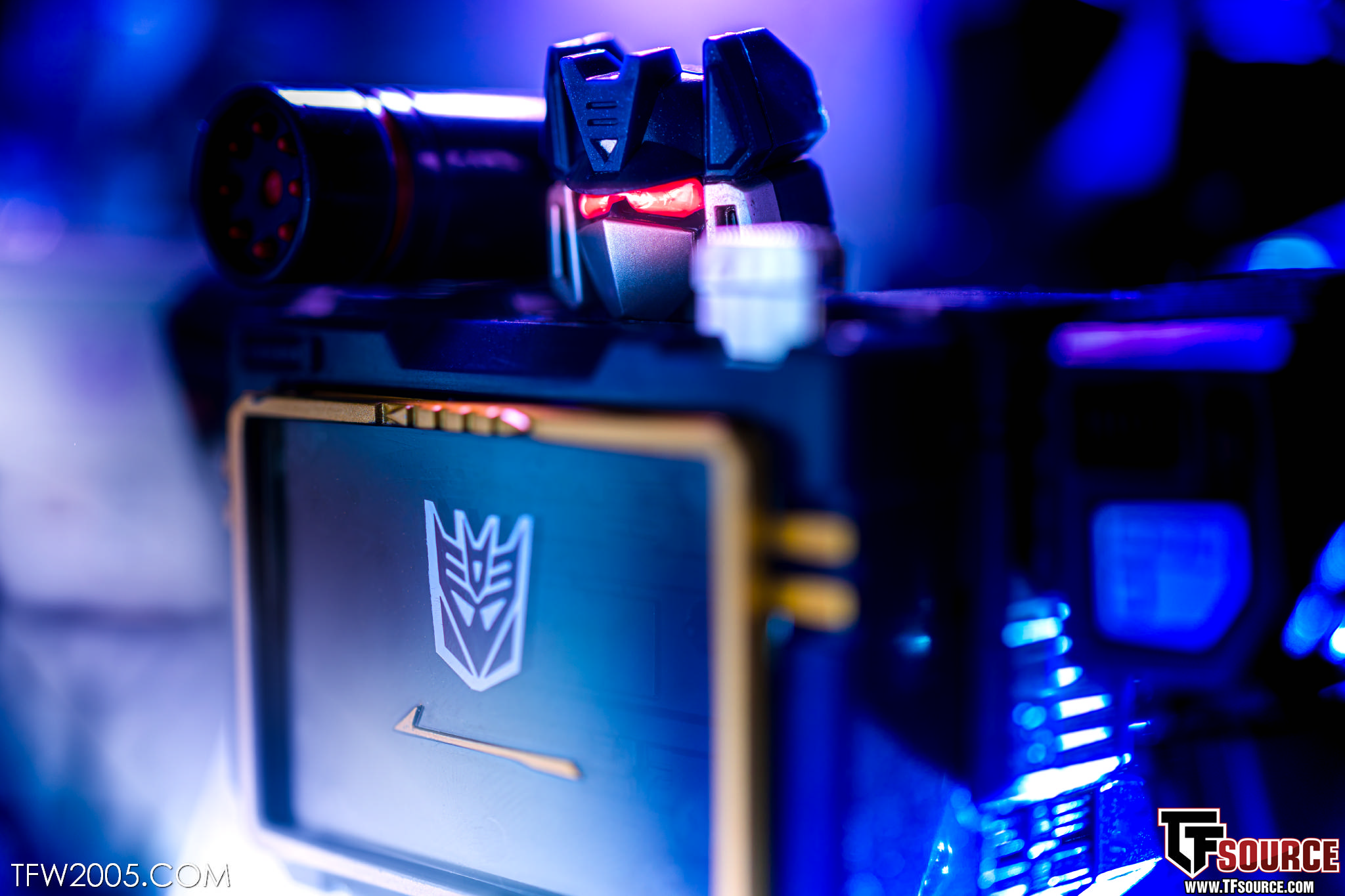 Just got him and the Ocular Jaguar. They look soooooo good together.

Be prepared for a $300 panelsplosion when it's announced.

It's extremely tempting to pick this up.

But damnit those v2 rumors…

Not directly on topic, but I transformed this guy last night (original release) – what a great figure. It was refreshing to not have dozens of tiny panels to fold up and twist like a lot of the new MPs, and the end result in both modes is excellent. The tapes are a huge bonus, like extra little side missions that are super fun.

Soundwave is probably one of the easiest to MP since the original was relatively close to the cartoon. I can’t think of anything that would warrant a re-do, it just doesn’t need it.

All of this is just encouragement to those of you that don’t own him yet. He’s very much worth it.

Mine is perfect, if anyone cares. While I don't think the issues aren't there, I don't think is as widespread as Hound. Matter of luck, I guess?

Just got him and the Ocular Jaguar. They look soooooo good together.

They're so costly, Hasbro simply abandons them at factories when they go hopping around the globe in search of more desperate workers.

Molds are supposedly costly tho, so maybe a lot of it is just that it's not deemed worth the investment,.

They're so costly, Hasbro simply abandons them at factories when they go hopping around the globe in search of more desperate workers.

Mould degradation is and always will be a thing. Moulds undergo stress during the production process, subject to drastic temperature changes. While these changes are negligible, after years and hundreds of thousands of castings of hot plastic followed by rapid cooling, the metal will start to warp and degrade in subtle ways. (which is what causes tolerance issues)

I think what's more likely though is the aforementioned drop in material quality and quality control now compared to when MP Soundwave first came out. That has been obvious as of late. Soundwave hasn't been redecoed that many times for mould degradation to set in that quickly, especially since newer moulds are themselves usually made of finer/improved materials than, say, toys from a decade or three ago. Poor QC and/or lower quality materials are the most likely culprit.

That's bizarre.
Different plastics?
Are the molds that prone to "degradation"?

Seems like lower quality plastic than before. It's been an issue with their releases as of late.

Supposedly a noticeable drop in quality control on the reissue.

That's bizarre.
Different plastics?
Are the molds that prone to "degradation"?

Lower quality on the recent reissue (reissue #3 I think). Lots of customers, including those in Asia, have complained about this.

Only issue with 2013 version was one of the index finger tips kept popping off. It should have been connected with a pin and not just friction. Seems like that issue was fixed with the first reissue around 2015.

It's no secret that Takara has been using lower quality material/manufacturing for some time now. Even their + "toon color" repaints of their older Hasui era molds show a dip in quality that wasn't present with their original versions.

Supposedly a noticeable drop in quality control on the reissue.

Do you think there's still gas in the tank for that? What about the other car bots and mini bots that Takara/Hasbro haven't touched yet?

They seem to go for heavy hitters. A new Soundwave is a matter of when, not if.

…At least definitely not before they tackle the Seeker mold for a third time first.

Do you think there's still gas in the tank for that? What about the other car bots and mini bots that Takara/Hasbro haven't touched yet?

Yeah, both fair points in hindsight. I speak as if it's a shoo-in, but they may go new mould sooner, they may not.

Ultimately, he's not too shabby is he? White accents over silver, tapered anime thighs like Hound's and smaller dark grey feet would be neat. But I'm more than happy using Oc Max Jaguar and Remix/Furor to stand in for the underwhelming official Frumble/Ravage without a new SW (their shelf-presence looks so much cooler placed around MP13, it's ridiculous!)

And MP Laserbeak perched on his forearm with him pointing with the other hand is absolute perfection as is. My fave MP pose by a mile!