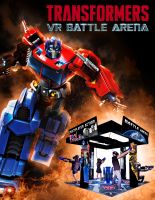 Developed by award-winning game studio Minority Media teamed up with Hasbro, Transformers: VR Battle Arena is an upcoming multi-person location-based VR experience in which up to four players duke it out in a competitive PvP matchup across several towering environments.

The game begins following the shattering of the powerful Allspark that scatters pieces of it across the world. You take the role of your favorite Transformer to battle and collect all the shards you can in order to win.

Ready to become Optimus Prime and shoot Decepticons in glorious VR? According to the information via VR Scout website the game will be shown at will be available to try from November 9th to the 22nd at this year’s IAAPA Expo in Orlando, Florida.

Click on the bar to see the first images on this news post and then sound off your impressions on the 2005 Boards!

About 10 years ago there was a grid based strategy game called "Transformers G1: Awakening" it was kind of basic, but was fun for the time frame it was released!

Yeah I had it. It was a decent time waster. They showed they knew the product, but the strategy aspect was severely limited as well as the time to beat it. I’m good with what I got for the price tag, but I really want a 40$ price tag and the fun to justify that price. If you do it right, you can add missions and characters via dlc. They have plenty of characters to add on to, and if you used sunbow cartooons or comics as mission inspiration you have that as well. Stick a decent random mission generator aaa well as a good ai together and boom.

Judging by the game-play pictures it looks like everyone is static and cannot move from their \'boxes\'. I really hope that is not the case, as that is just garbage.

VR shooting games have been great for awhile, such as \'Raw Data\' – which I recommend everyone check out if they have access to it (I rented a few hours on a machine at a local place, maybe for $30 total, and it plays pretty well). It is totally possible to do a proper VR game that allows you to move around, and anything else is just plain lazy. In the case of Raw Data you point to the spot you want to move to and you teleport there, so in Transformers case you could do the same and then quickly transform into your alt mode to move there (and potentially running over anyone in the way).

I would much prefer a turn based strategy game of some kind. 3% of the population will have an opportunity to play this.

About 10 years ago there was a grid based strategy game called "Transformers G1: Awakening" it was kind of basic, but was fun for the time frame it was released!

This is cool, I guess? What I really want is more console games.

I hope we get back to having regular console games again. I'm not asking for another War For Cybertron. I just want something to play on a Switch.

Imagine if it had some Gundam Crossover action ….. depending on which Gundam, because they're mostly bigger than Transformers.

It would be a pretty good crossover

Jesus, they sure are insistent on these damn evergreen designs. Had they gone for a more Devastation-like cel-shaded look they might be able to attract non-fans over the age of 10.

Man I really hope we hear something on that Certain Affinity game soon.

I feel like if they wait any longer it's going to be launching at a bad time for GaaS titles.

Well forged to fight exists but it's on mobile, but I've found a way to play it on PC by downloading Bluestacks

Imagine if it had some Gundam Crossover action ….. depending on which Gundam, because they're mostly bigger than Transformers.

we need a streetfighter esque game, I'd go NUTS. then you could put characters from all universes

Well forged to fight exists but it's on mobile, but I've found a way to play it on PC by downloading Bluestacks

Will this be released for PS VR or Is this another arcade game like Human Alliance and Shadows Rising that I\'ll never be able to play?

considering the photos have a massive gun controller, i doubt we will get any home based action unless they really tweak it. I would assume between two vive/rift controllers you have enough buttons for however many are on the gun, but im thinking this is more like a mario kart vr situation where arcade will be the only location.

Hopefully it\'s at Dave and Buster\'s.

If it is anything like the VR "experiences" I have seen, it will be $10 for ten minutes worth of game.

If you want to kill anything, just overprice it for an underwhelming experience.

Dave & Buster's is figuring that out with the $3 per play Halo game that sits empty.

we need a streetfighter esque game, I'd go NUTS. then you could put characters from all universes

You take the role of your favorite Transformer

Hmmm
It uses stylized versions of the Cyberverse designs as far as I can tell, so, thats neat..

They appear to be the Evergreen Designs, that Cyberverse is based on.

One day we’ll get a Street Fighter-esque video game for Transformers. One day. Hasbro could create a brief story and plunk in whatever characters they feel like. *sighs* This is close to what I want, but as others have said, I’d much rather play something like this in the privacy of my own home.

… this is not Devastation 2.

I wish it was, still waiting to see what happens after the first game