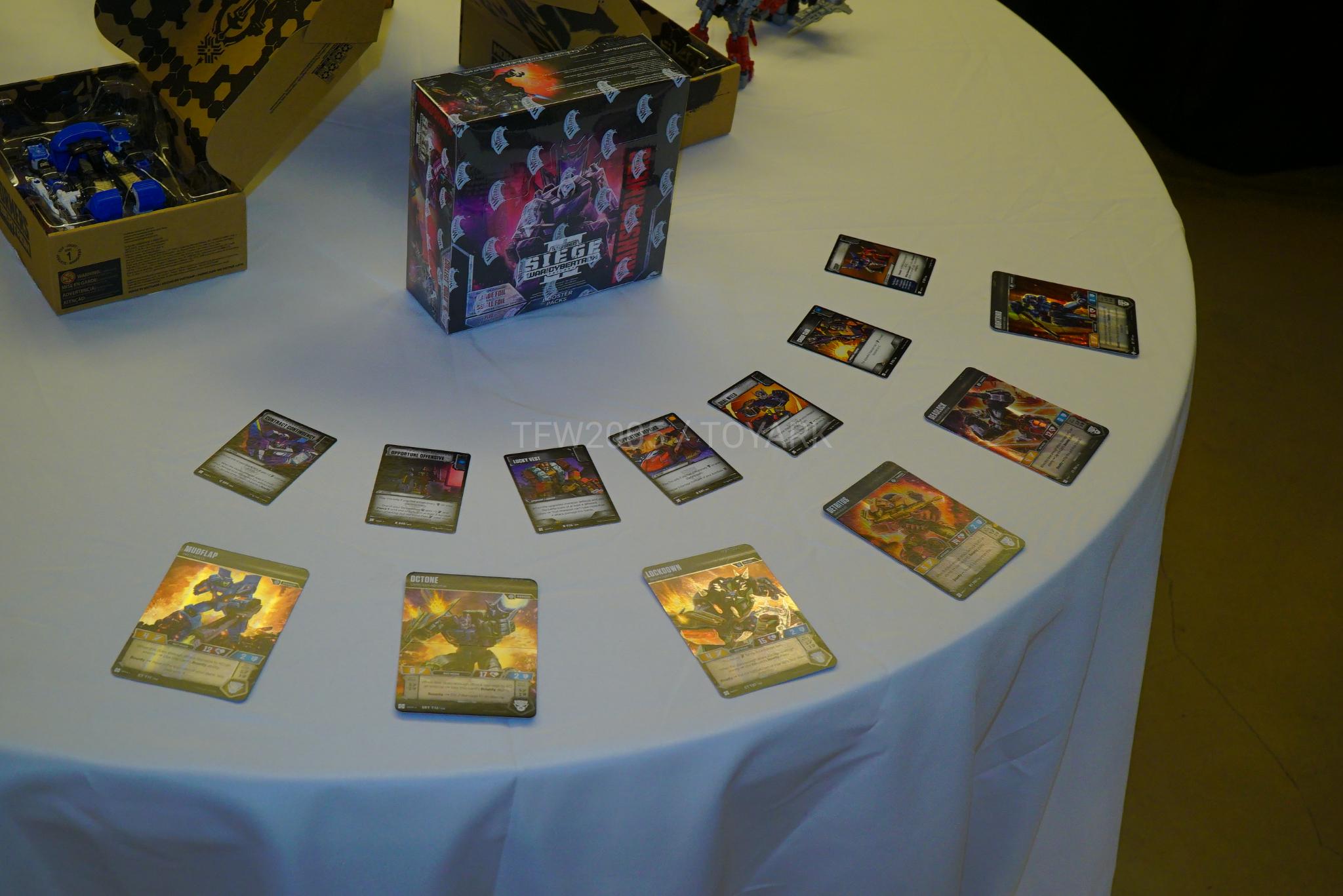 Our coverage of New York Comic Con continues, and we bring you images of the Transformers Trading Card Game reveals from the event, and we can share for you the new War For Cybertron: Siege II Mercenaries cards. Get ready for the release on Novermber 11th, 2019!

Check out all the images after the jump, together with the official release and description and then sound off on the 2005 Boards!

TRANSFORMERS: TCG – WAR FOR CYBERTRON: SIEGE II MERCENARIES
(Ages 6 and Up/ Approx. Retail Price: $3.99/ Available: 11/08/2019)
The Mercenaries are coming to EARTHRISE product in 2020, but fans can get the first taste of them with TRANSFORMERS TCG – WAR FOR CYBERTRON: SIEGE II. The TRANSFORMERS Trading Card Game is a fast-paced, action-packed battler for two players. Each player builds a team of oversized, double-sided TRANSFORMERS character cards and fights for victory, switching their characters between different modes and employing a vast array of weapons and upgrades along the way. Like other TRANSFORMERS TCG Character Cards, Mercenaries are distributed in Booster Packs across varying levels of rarity.

As the battle reaches its crescendo in WAR FOR CYBERTRON: SIEGE II, the AUTOBOTS and DECEPTICONS turn to desperate means to secure victory. The DECEPTICONS wake their most dangerous weapon… the mighty Titan, TRYPTICON!

I love the idea of the mercenaries! I have not checked every new reveal as of know (at some point I just wait for the pictures to show up in the official Facebook gallery, do not want to spoil everything for me), but this will give Deck building a nice new touch.

Whos that blue carbot in the packaging there? Resembles Smokescreen but is missing the white and red.

It's too bad we left cybertronian modes so quickly in WFC, im really hoping theres some cybertronian bleed-over, because we got some killer designs popping up left right and center in the TCG that id love to see get realized as figures.

In case you missed it, we had some pretty big news drop last week! Here's a roundup of all of the MERCENARIES, including a couple of cool deck lists and a reveal by Matt Smith!

Okay, @TransformersTCG fans! Here's the character card that was at #NYCC2019 but not in the stock photos! Like a ninja in the night, she strikes swiftly and unseen – it's NIGHTBIRD!

Drift is supposed to transform into a Japanese Drift car

But am I the only one that gets a VIP* vibe from Deadlock's vehicle mode?
That's awesome!

(*VIP is a customizing style that emphasizes large luxury sedans, blacked out, dechromed, tinted windows and slammed. Some say it's based on a mob/mafia/yakuza style, though when we sent someone to ask, he was never seen again! )

Hey she has an alt mode? What is it?

So they're saying we can expect them in Earthrise?

We also got toys of him in AOE and Studio Series. But it would be nice to see something more inspired by his Animated incarnation like this art

That's kinda what op was saying, though.

I hope these cards are hints of toys to come.

I'd love to see toys of Lockdown, Detritus, and Mudflap.

I love all of these card art. Thanks for reminding me Lockdown despretly needs a new toy (NOT IN CYBERVERSE). All he got was a TFA fig and an ROTF. Both 10 years old.

We also got toys of him in AOE and Studio Series. But it would be nice to see something more inspired by his Animated incarnation like this art.

They couldn't settle on what his name should be so they put both on there!

It's a pleasant Easter egg.

I find it funny that all the cards have the character name in English on the left, and in Cybertronian on the right, and OCTONE's name in Cybertronian is OCTANE. They couldn't settle on what his name should be so they put both on there! 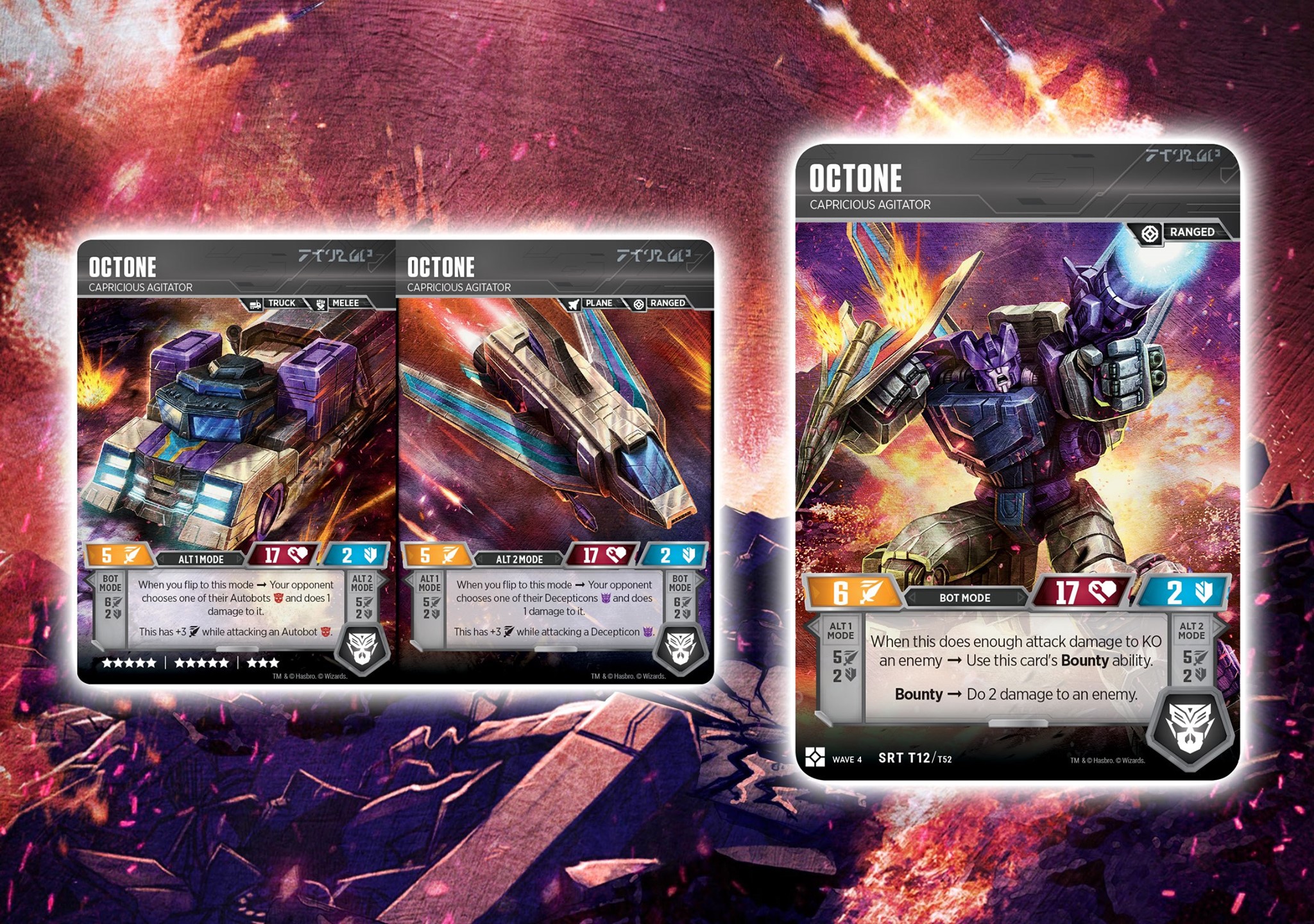 Yeah I was thinking the same thing. Also where's Devcon?

One of the cards I did lines for (through my job at Volta) has been revealed at NYCC ~!
Colors by @KrinSyn :> Done for Wotc/Hasbro, for Transformers TCG!
#MoreThanMeetsTheArt

I'm all in for that Mudflap and Lockdown

By the way, I looked it up and it's

I put it in spoiler tags just in case anyone else wants to have fun guessing. But yeah, he totally belongs in this set.

Deadlock looks cool, and I guess Detritus is just a Hound redeco, but hey, always happy to get more Junkions.

I the card game fun (if it even is a game or is it just cool artwork on a card)?

By the way, I looked it up and it's

I put it in spoiler tags just in case anyone else wants to have fun guessing. But yeah, he totally belongs in this set.

Wait no,,,, (damn, mental block. The Flo Derry guy from Season 2? Appeared in one episode with Smokescreen?)

Why isn't he in this collection?
(Name's gonna bug me for an hour if I don't go over to TF Wiki.)