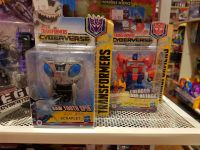 Far from being something you really ought to see a doctor about, this is a sighting of the new Transformers Cyberverse Scout Class assortment, giving those in the UK a chance to own a Scout class version of the voracious metal munchers.

Both of these were chilling on the shelves of Toys-UK in High Wycombe. For those collecting Siege, there were also Wave 3 toys including Red Alert, Refraktor, and Springer – but no Brunts.

If in Bristol and after scraplets then check out Totally Toys on the Gloucester Rd. they had a couple on their shelves yesterday.

gotta get me a scraplet !!!

Also the Optimus. But yay, Scraplets!

Was in Toys-UK High Wycombe. Now in my bag.