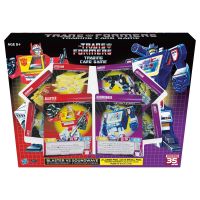 To help celebrate the 35th Anniversary of Transformers, the Transformers TCG presents the fan-favorite match-up of Blaster VS Soundwave with throwback art and packaging.

Are you attending the convention? This set lists for $50 with an item limit of 2 per customer. No word yet if this is an early release or might be available online or at other conventions later in the year. Stay tuned for more Transformers-related Comic-Con updates as we await release of the program schedule and join the discussion on the 2005 boards!

Update: The TCG crew confirmed via their official social media channels that Comic-Con won’t be the only place to acquire this set, and that this is just the first of their exclusives for the convention!

Live for everyone to buy on Hasbro Pulse!

There are actually TWO Soundwave deck lists in here because MATT SMITH: SUPERIOR.

Transformers TCG on Instagram: “All of the characters that come in the 35th Anniversary Edition of BLASTER VS SOUNDWAVE! ⁣ ⁣⁣ ⁣NOTE: The Mini-Cassette character cards have…”

Transformers TCG on Instagram: “All of the characters that come in the Retail Edition of BLASTER VS SOUNDWAVE! ⁣ ⁣⁣ ⁣NOTE: The Mini-Cassette character cards have been…”

Transformers TCG on Instagram: “The Omnibots make their Transformers TCG debut in the 2019 Convention Booster Pack! The full, three-character team appears in every pack.…”

Great news! The retail edition of BLASTER VS SOUNDWAVE will be available September 20th in regions where Transformers TCG is sold! Please contact your preferred retailer for availability!

In time. Probably sooner than later given how close they resemble certain molds Hasbro has been really trying to get out the door.

While reading the ign article about the Special Tcg 35th Blaster vs soundwave set it revealed there is another set that has the omnibots.

Blaster should be a mandatory Voyager for next years WFC line. In fact there should be a pic of him at SDCC.

Just missing alpha trion and shockwave from wave three TCG deck but def getting this one as well. Looks great

I will pass. Nothing different toy wise than the tru releases 10 years ago.

…except that it's cards for a card game, and not toys?

I love the TCG ( I am collecting most of the waves) but let’s be honest. Instead of getting plastic, highly engineered toys we are getting shiny cardboard. I hope there are better deals to be had than this.

They missed an opportunity not putting them each in a DJ booth with half a stage in the background.

Not really, HasCon MTG Grimlock is still not released outside of the limited HasCon Promo set. I want it, but I'm not paying that premium price…

Thing is, Blaster and Soundwave are going to be legal in the main format of the TFTCG. The Hascon Grimlock is silver bordered, meaning that it won't see play outside of friendlies or very lenient commander groups. I think that no-format legal cards like Grimlock get somewhat of a pass on being convention exclusives. This isn't a case like Nalathni Dragon, where the card was both exclusive to one event and legal.