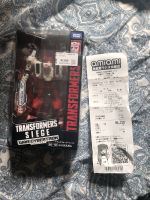 Courtesy of our very own TFW2005 mod and Japan resident Gamerlingual, we can report that the Takara Tomy Transformers War For Cybertron Siege Wave 3 is out In Japan Retail.

While the figures released by Takara Tomy have no discernible differences compared to their Hasbro counterparts, they have been released in unique waves with a mix of different classes/sizes. Takara Tomy Siege wave 3 consists of: SG-15 Aimless, SG-16 Laserbeak & Ravage, SG-17 Ironhide, SG-18 Autobot Six-Gun and SG-19 Starscream. As reported by Gamerlingual, these figures were spotted at Ami Ami stores in Japan.

fun fact : Takara WFC wave 3 will be the last Transformers toys to be released in the heisei period.

sadly I have yet to see ONE seige figure at a Toys r us or any other major retail chain here. I of course always pre-order my figs from amazon but still, sad to see only movie stuff on the shelves of toys r us. At least in my area

I kind of thought Japan would have these items before we would? Make sense since Japan came up with the idea of leading to Transformers with the help from Hasbro

So is the "TRANSFORMERS SIEGE" label something that slides over the box as we know it…or is it a part of the overseas version of the packaging?

So is the "TRANSFORMERS SIEGE" label something that slides over the box as we know it…or is it a part of the overseas version of the packaging?

I find it interesting Takara kept the Hasbro WCF-S numbers (on the side with the name) and added the Takara number to the bottom.

Well, Six Gun and Starscream are sold out

On first viewing, I thought the thread title said the toys were SOLD OUT in Japan, which had me going "really?"