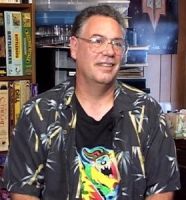 It is with great sadness that we announce the passing of Larry DiTillio, writer of the Transformers: Beast Wars TV Series.

A brief Tweet from J. Michael Straczynski brought the sad news about Mr. Larry DiTillio who passed away after a long illness. He and Bob Forward were the story editors of the Beast Wars show which brought a complete new generation of fans, and made Transformers shine on pop culture once again. His work made Beast Wars one of the best (if not the best for many fans) written Transformers shows. The great story-telling and character development was one of the keys of Beast Wars success.

His contribution to our franchise will never be forgotten, together with the great writing talent he showed working on the original Masters Of The Universe cartoon and its updated 2002 version.

TFW2005 sends our condolences in this sad moment.

I used to watch Beast Wars as a kid.  I hardly remember watching the G1 cartoon, except for The Tansformers: The Movie and \"Five Faces of Darkness\" both on VHS.  But Beast Wars is the first Transformers series I\'ve watched in its entirety.  May he rest in peace.

I didn't even realize that he died until today. Rest In Peace, Mr. DiTillio, and thank you so much for bringing the very show that first got me into the Transformers franchise in the first place to life.

His work defined my childhood!

He’s helped leave a great legacy, that still to this day is grossly underrated.

I'm so glad they came together to and had that special alchemy. Beast Wars is a very special show to me.

Lightning in a bottle for sure.

A couple of years ago, I got in touch with Bob Forward. Being the gentleman that he is, he was good enough to provide answers to some burning questions I had which I greatly appreciated.

Given the recent news, I decided to reach out once again to pass on my condolences and to ask if he had a fond memory or two from his time working with Larry that he might like to share. True to form, he was gracious enough to take the time to reply once more and let me pass on his comments:

Here's hoping that HasCon 2021 (as well as other fan conventions) might get Bob on board for a panel or two given the upcoming anniversary.

Thanks @Verno, very cool to hear Bob breakdown what Larry brought to the show.

It's funny, I think these names (Bob Forward & Larry Ditillo) were for a very long time the only TV writer names I knew.

I'm so glad they came together to and had that special alchemy. Beast Wars is a very special show to me.

A couple of years ago, I got in touch with Bob Forward. Being the gentleman that he is, he was good enough to provide answers to some burning questions I had which I greatly appreciated.

Given the recent news, I decided to reach out once again to pass on my condolences and to ask if he had a fond memory or two from his time working with Larry that he might like to share. True to form, he was gracious enough to take the time to reply once more and let me pass on his comments:

Larry was always a delight – he LOVED working on Beast Wars, for itself and because it was a Transformers show. He was the one who would make lists and details and map stuff out and try to work out the reasons for things. (I tended to just wing it, but I wasn't shy about using all the data he'd worked on.) I remember him calling me enthusiastically because he decided he was going to explore what it meant to be a Transformer, starting with its very soul, its "Spark." At the time I assumed he'd invented the term, which I thought was a cool name. Whether he did or not, his delving into that aspect of the characters really started both of us down a path that I think helped define Beast Wars as a series and most certainly lead to some of our best shows. Working with Larry was not only fun, but our constant efforts to one-up each other (always in a good spirit) pushed both of us to become better writers.

Here's hoping that HasCon 2021 (as well as other fan conventions) might get Bob on board for a panel or two given the upcoming anniversary.

He helped bring us so many wonderful stories. I have no doubt that his work has enriched my life, and many others, and given the breadth of his career, may still continue to do so as I, and we, and new fans encounter more of the shows he worked on as the years go by.

I'm sorry he struggled with his illness, but I hope that he's at peace now. I hope his loved ones know the positive impact that Larry had on so many people. May he rest well, now and forever.

I remember when I was a kid, maybe 9-10 years old, I was a big Beast Wars fan. It was a simpler time where the internet hadn't become mainstream and it was a more naive place, where people weren't worried about being doxxed. For some reason I came across a site with Mr DiTillio's email address on it, which was @aol.com. Knowing how AOL worked, I knew that would also be his AOL Instant Messenger username, so I messaged him on it, telling him that I was a kid who watched Beast Wars and I really loved the show. He told me thanks for the kind words or something to that effect.

Not really interesting but wanted to share with y'all.

For years, over two decades, I despised Beast Wars. As a G1 purist I couldn\'t believe in a world where animals turned into robotic beings. Well flash forward to the release of TF1 and my interest in all things Transformers was alive and kicking. And with that I gave Beast Wars a try. Well needless to say after watching one episode on TV I was hooked. The writing and storytelling was so good I could actually believe animals turned into robotic sentient beings. And one other thing I remember was always seeing Larry\'s name in the credits. THANK YOU FOR ALL YOUR HARD WORK…… Rest in Peace.

It's a shame he never got to do anything more with TransFormers. RIP.

We as fans always want one more thing from our favorite creators. It’s a sign of flattery, I guess. But he did write the TFA episode, “Predacons Rising,” so there’s that.

We commend his soul to the Allspark. The greatest of Cybertron.

Beast Wars was some of the best TF stuff ever made for the screen.  I used to rewatch those episodes on video cassette so many times (especially \"The Agenda\" and eps after that).

It's a simple thing for me. Beast Wars is what got me back into Transformers. It was specifically the Agenda Trilogy that had me going back and watching the BW reruns going at the time (my younger brother was watching, told me about it, and I had to see the whole thing). I'm positive I would not be a part of all this if not for Bob Forward and Larry Ditillio. At minimum, I wouldn't have had the long, wonderful ride in this fandom I've been able to enjoy. This really is a sad day for a lot of us.

I met him (and Bob Forward) at BotCon 97. Super nice and interesting guy. This is sad news.

Rest in piece, thank you for the amazing show that used to watch when I was younger A part of my childhood died… But will live on in my children. Good sir, you are still alive, and not forgotrn

So, so SAD;(. Beast Wars reignited a passion for me in transformers that almost left  when I was transitioning from high school to college. I remember seeing the toys on shelves before the show hit and was hesitant to buy into the new story from G1 that I grew up with. Then I watched the show, and I couldn\'t believe the chemistry with characters and storyline that proceeded! Larry DiTillo and Bob Forward brought so much to the transformers lore, and I\'ll always treasure it!

Larry, Thank you so much for your stories, and your contribution to Beast Wars and the Transformers! Many thoughts and prayers to him and his family. May your soul rest in peace.