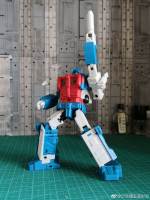 This figure is a very cartoon-accurate representation of  Ultra Magnus in both modes. The robot mode proves to be very articulated and poseable. You even recreate Ultra Magnus pose shooting at the sky from the classic G1 Transformers Movie poster. Another picture shows Magnus next to other Magic Square molds like Inferno, Grapple and DX9 Dutch (Optimus Prime), proving that the scale between these figures is well planned. Another very nice addition to the growing options of unlicensed Legends scaled figures.

No information on release date yet, but you can check out the mirrored images after the jump, and then share your impressions at the 2005 Boards! 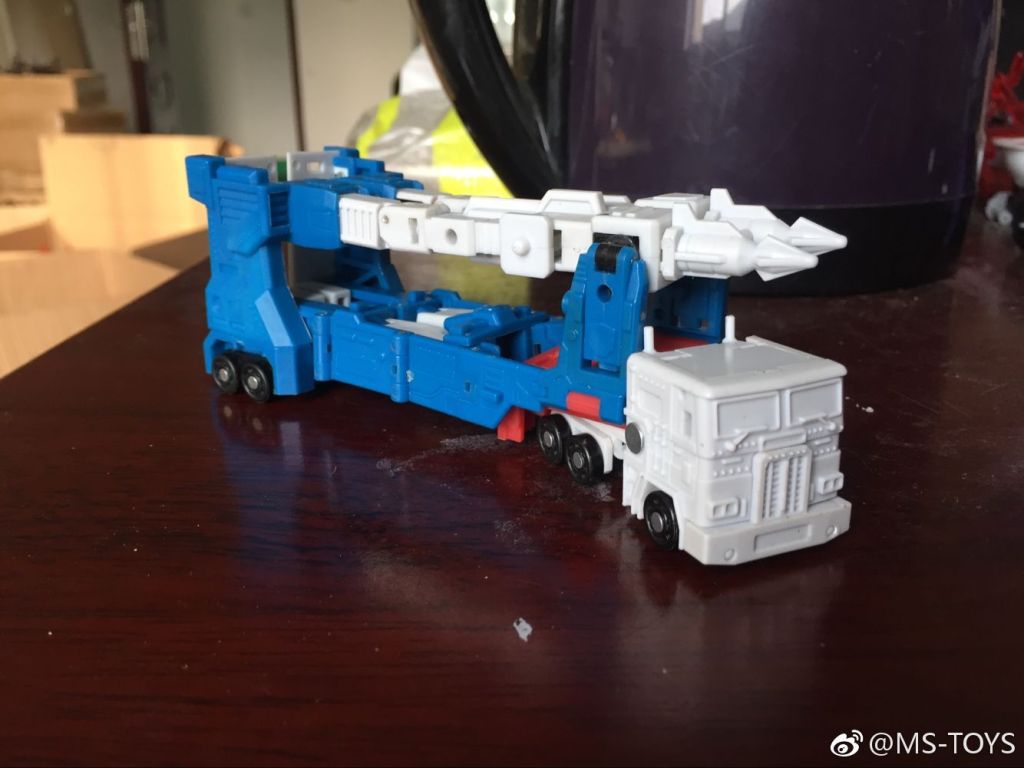 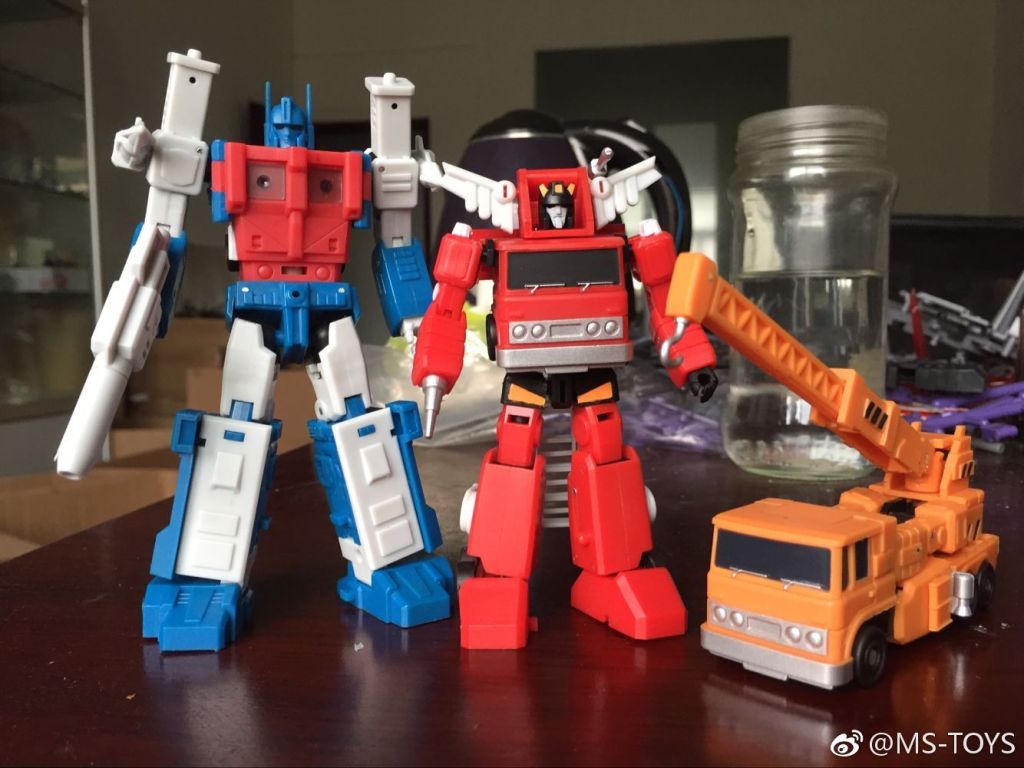 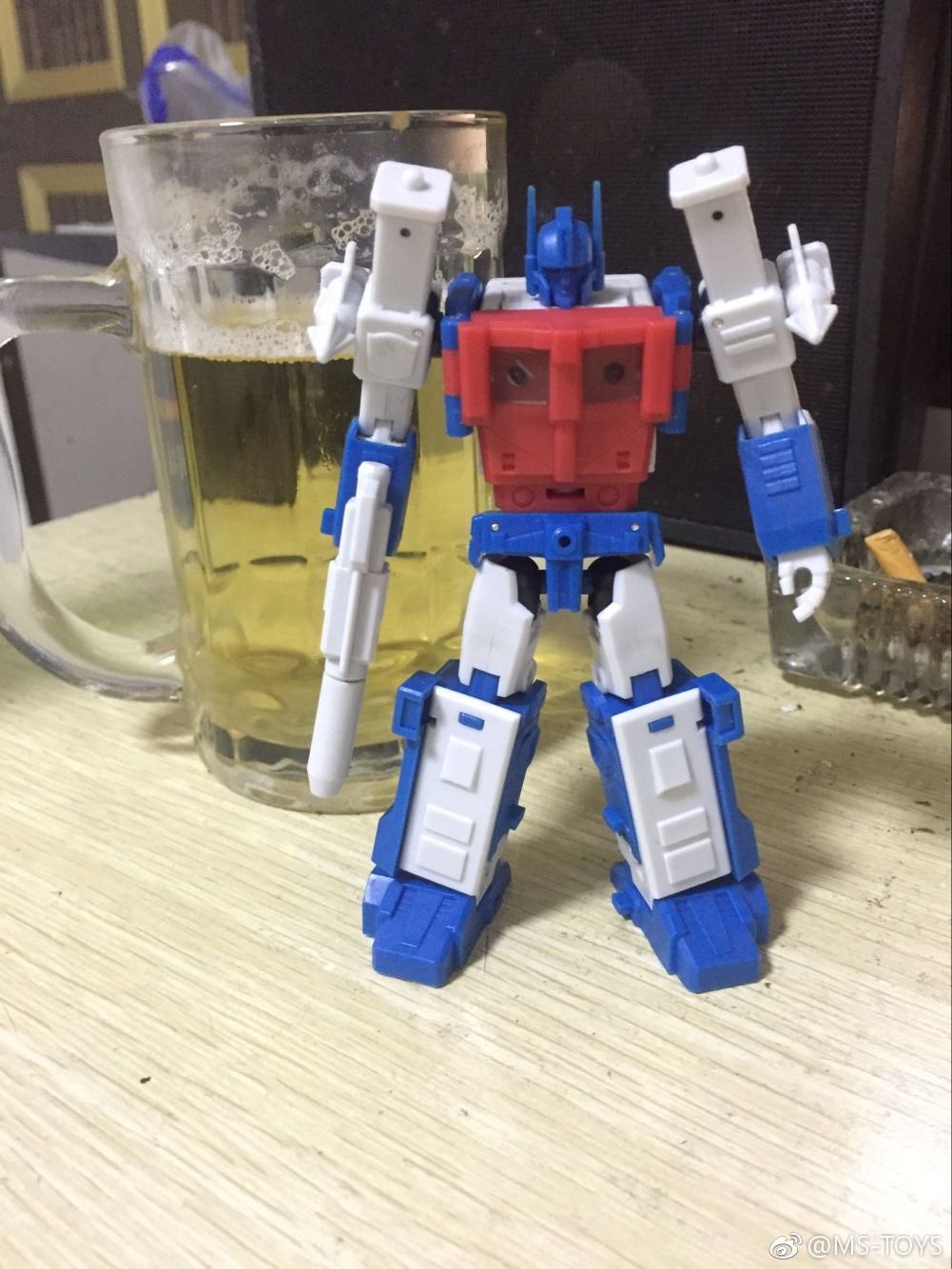 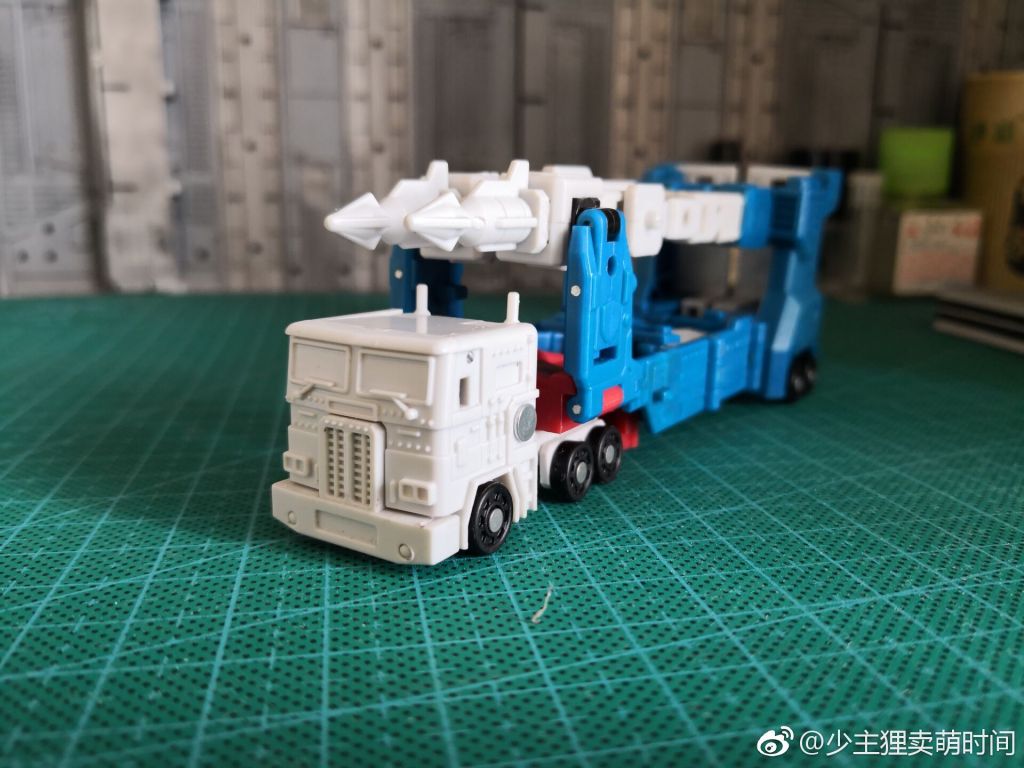 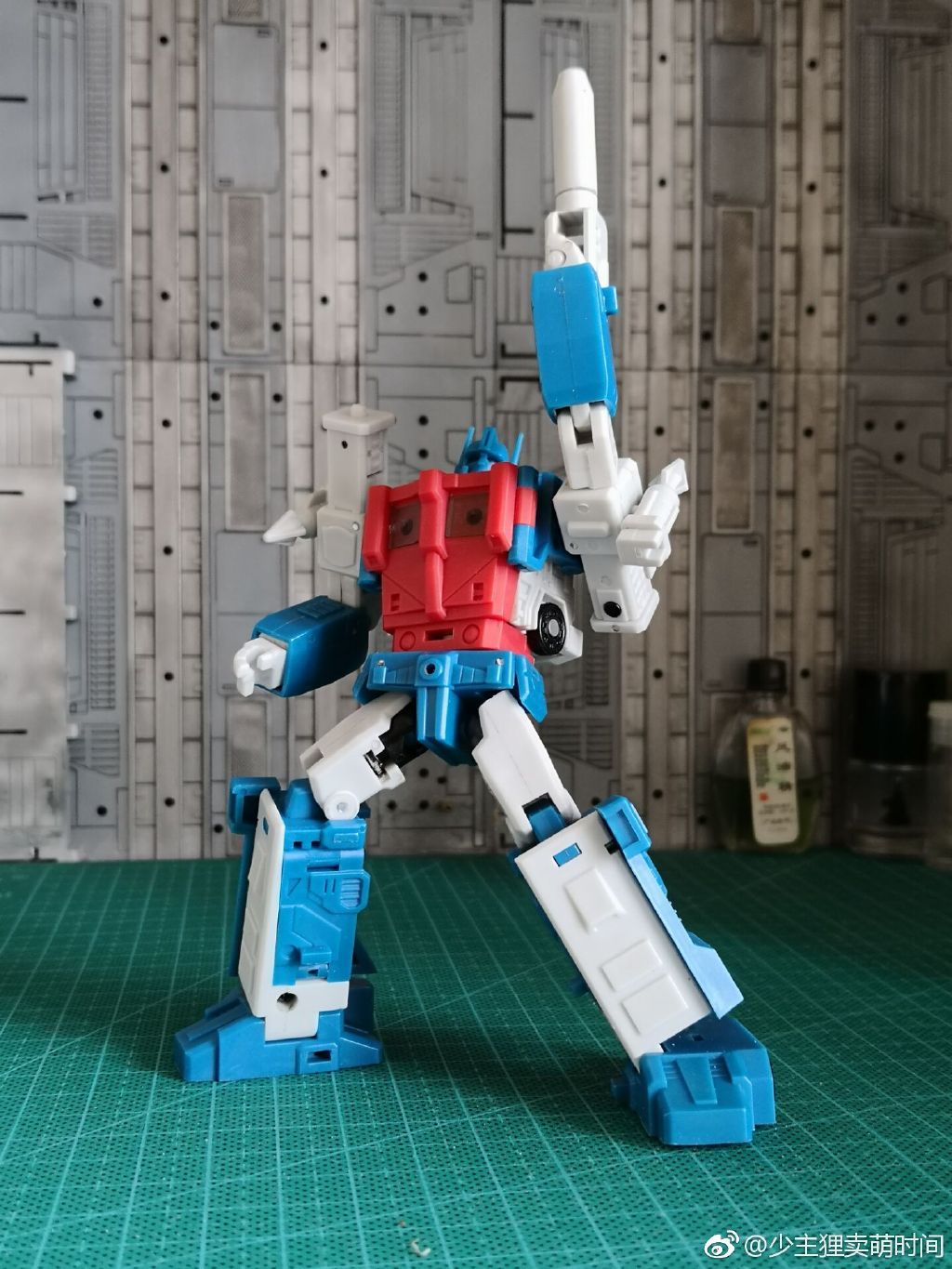 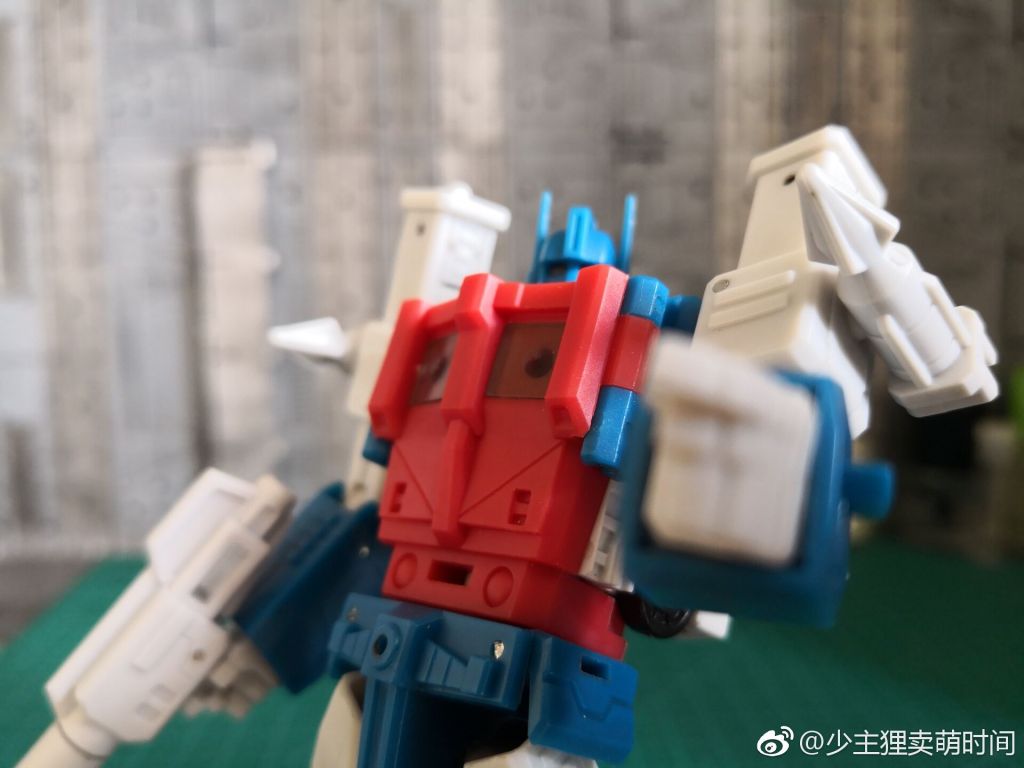 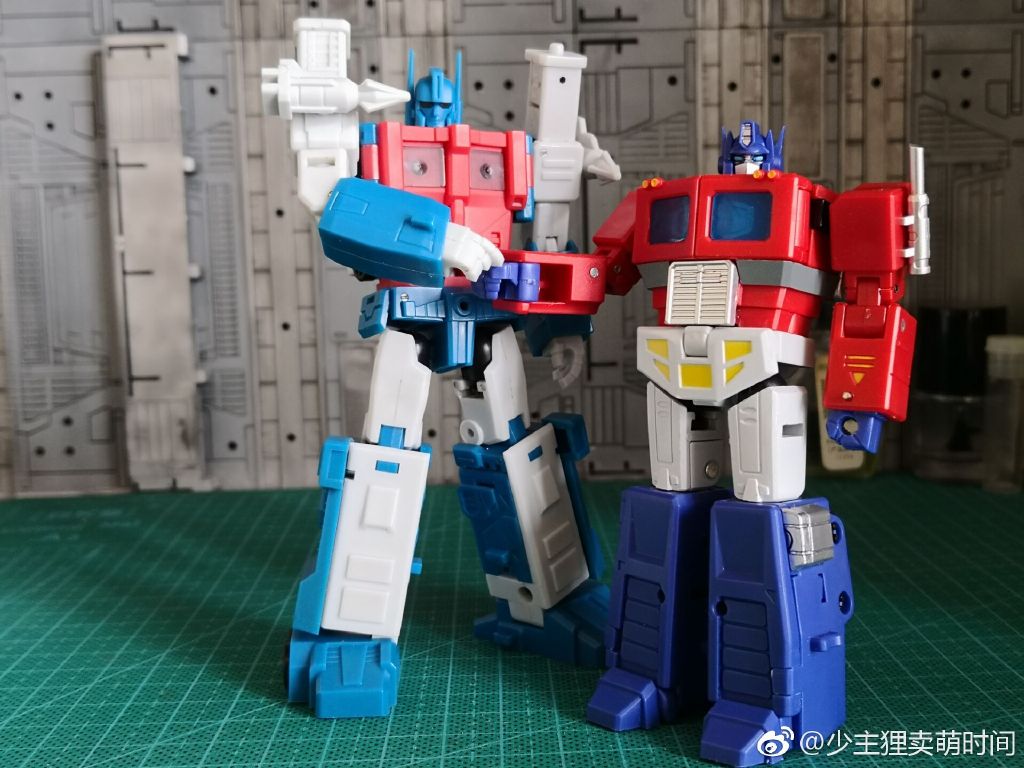 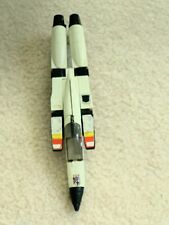 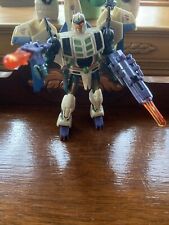 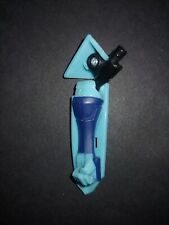 Now I just need the clear version and the dark urine colored one which is a chase figure I believe and next to impossible to get.

Anyway, Magnus is up there, in my opinion, as one of the best MS molds, with Prime and Datsun molds being the best followed by the Cyclonus, Trailbreaker/Hoist, and Reflector molds in no particular order.

^Wee problem though, the top piece of the black ball and socket broke, it still holds but it is pretty loose. No worries, I'm sure showz will have my back and get me a replacement part.

I'm gonna wait and see what NewAge does with UM.

I thought about it, but that's going to be a LOOOOONG wait. NA looks like they're going through Seasons 1 and 2, and at their rate it'll be a few years before they get to the movie. MS Magnus goes great with DX9 and New Age.

I'm gonna wait and see what NewAge does with UM.

from the pictures, he looks just a bit larger than MFT Magnus but no bigger than PPT Magnus. i'd say he would go well with HS Prime and the OS KO of Dutch. can't say how well yet with MST Prime. or maybe i could be wrong how he goes with HS Prime and OS KO Dutch.

^In my best presidential voice.

An OS KO is coming from CostPerformance

That is odd. I mean, it was a cool surprise to have it drop (literally) out of the box, but it would be cool if it was a standard thing. I like the idea of building a MS collection and then having a display backround to boot.

I think they were going to start selling them desperately, and maybe this inclusion was a way to whet our appetites. It's cool, but I don't have much use for it. If it came with some sort of stand, that might have made it more compelling to me. As it is it stays in the box (I luuuurv MS Powered Convy)

no, just that one. For some reason they decided to include it. Maybe the beef up the price?

That is odd. I mean, it was a cool surprise to have it drop (literally) out of the box, but it would be cool if it was a standard thing. I like the idea of building a MS collection and then having a display backround to boot.

Just got Diaclone Transporter yesterday – do all the MS figures come with the display plate?

no, just that one. For some reason they decided to include it. Maybe the beef up the price?

Just got Diaclone Transporter yesterday – do all the MS figures come with the display plate?

The collector cards might be carry on from hot soldiers, spike art has a passion for cards hence they all came with cards. Around about the same time hasbro did theirs too. I have a bunch of tf cards, some with very nice artwork but they are not toys…

Arctic Prime is money per usual with this company.

Note: Sorry for the SW Swoop bike and Director Krenic in the background.

^I guess since this guy is technically Ultra Magnus right? And yes I know, only jerks quote their own post.

I posted this on another Magic Square Powered Convoy thread, but no one seems to go on that one, so I'm reposting it here:

Mine came in over the weekend, so here are my two cents!

Powered Convoy is quite nice, though with noticeably fewer paint apps. The only ones missing that bum me out are the lack of painted in windshield wipers, and the unpainted raised "equals" sign on his right shoulder. The painted wipers on Ultra Magnus in particular were a really nice detail and made it feel a bit more like a tiny MP in truck mode. He's also missing the painted fake headlights on his waist. I don't miss them too much, but maybe painting them in the same yellow-orange as are on his legs would have brightened his torso up a bit. The bumper and grill on Powered Convoy are silver paint this time around, but it's such a nice, smooth, glossy silver paint that I wasn't sure that it wasn't chrome until I did a side-by-side with Ultra Magnus. In pictures it's much more obviously paint, but in hand it's REALLY chrome-y looking. I prefer this as chrome wear is always a concern when it comes to handling figures, and it also means the grill lacks the ugly "tear" that was common to the Ultra Magnus version where the chrome was separated.

The joints are nice and tight. REALLLLLLY tight. Almost too tight. Apart from the hips, which are kinda floppy, but no more so than they were on Ultra Magnus.

The light piping seems to work a lot better on PC than UM. I think the blue plastic is a lighter shade, allowing more light to pass through. The emerald green chest glass looks gorgeous, and I vastly prefer PC's silver face and antenna to UM's white paint. That said, the masking on the silver on PC is more slapdash; it doesn't go all the way up the bridge of his nose, whereas the white paint on UM's face completely covered his facial area.

The orange base plate is…fine. It's a big plastic orange square. I don't have much use for it unless I were to get more of them and connect them, which I probably won't.

The unpainted black trailer hitch on his waist is accurate to the trailer hitch being black on the Diaclone toy, so that's fine. The side panels of the truck mode that fold out of the legs should have been grey tho. That's the one major inaccuracy from the Diaclone toy. It also would have also been nice if they'd put the little yellow circle on his crotch that the MP figure has and that the early TF Movie trailer version of Magnus in the PC colors had.

I like the lighter blue (and silver grill) so much more, but happy they're making an alternate version for those who want him.

I'll likely be getting the new cartoon color version. I kinda wish i had waited on getting him so i wouldn't have to sell my original one. I also kinda wish someone on shapeways would go ahead an make a skull face for Delta Magnus so I can use him as Shattered Glass Magnus.

Some of the BW2 and BWneo figures I bought also came with collectors card. It must hus predate the 2000 G1 reissues.

Oh, that could be. Possibly Car Robots 2000 had them too.

Gather 'round, children, and let Old Man Broadside tell you about the history of Transformers collectors cards…

Some of the BW2 and BWneo figures I bought also came with collectors card. It must hus predate the 2000 G1 reissues.