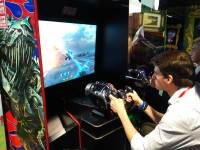 Sega has announced a sequel to Transformers: Human Alliance arcade game during Amusement Expo 2018. Titled as Transformers: Shadows Rising, the cabinet is modeled after Optimus Prime as opposed to Bumblebee for the original game.

Arcade Heroes has the scoop:

“With the sequel, Sega has opted to focus on Optimus Prime. Several signs were posted on the machine saying that the software was 75% complete but the cabinet likewise seems to be lacking some production level finesse. The Optimus head looks spot on and has LED eyes; it also has decorated mufflers on each side. But different from the Deluxe version of Human Alliance(which uses a molded bezel), the back of the game is flat and currently uses frosted acrylic for the windows. The game’s title is only found on the side art instead of a noticeable marquee.  Overall feels like there are a couple of elements missing but I would expect this to look different by the time the release rolls around.

Software wise, the game plays like Human Alliance – there is a strong focus on co-op play, larger enemies require one to hit the targets quickly to break the attack, there are swarms of smaller enemies to fight, the voice acting is perfectly cheesy and there are Autobot assist sequences (Coop Battle as the game calls it) where you must hit all of the markers that appear to help the Autobot win the fight against the Decepticon. You (and your companion, if playing 2p) are given a letter grade depending upon your performance during these sequences, just like before. A story unfolds as you play along although chunks of it are certainly missing in this build. You also encounter Dinobots.

Graphically the game is a noticeable improvement over Human Alliance. It appears to be running at a higher native resolution; textures are sharper, character objects have more details, the colors are much more vibrant, there are nice smoke & explosion effects (now with more spark particles) and the game seemed to be running at the necessary 60 FPS. The lighting engine is better, with crisp shadows and less bloom than I recall from THA. I have no idea at the moment what hardware it is using but it seems likely it would be a step-up from the RingEdge 2 that THA ran on.”

You can read the full article, checkout the photos and videos at Arcade Heroes.

Anyone know why they blocked out with a circle on the top right hand corner of the pic?

Probably because the original text is still not finalised, and might not suitable for certain demographics?

I love Human Alliance I play it a few times a year!

Same Here! Spend tons of money jus to beat it lol!!! I usually play at my local D&B as well as that machine is well kept. Another machine I've used was at a cinema a little far from where I live but unfortunately only one of the guns was working. I also wanted to play the non-cabinet version I came across in Universal Studios Orlando but didn't have time that day

I'm very excited for a sequel but not digging this new cabinet look. It does not have the streamlined flow of the Bee design. This feels… forced in design.

It reminds me of the G1 episode where the Bots were all having trouble transforming and Dinobots had to go back to Cybertron to retrieve something.

Anyone know why they blocked out with a circle on the top right hand corner of the pic?

That's the same guy in the TR Devastator pic from a toy fair a few year's back.

I saw this at the Amusement Expo in Vegas last week. Didn\'t realize it was a big deal. Not many people were lining up to play it. The TMNT game coming out looked way more fun.

WhY mY aLt MoDe Hurt?

We don't even have arcades in my area any more, and the best Sega game I've played recently is Persona 5…still, good for those who enjoy these. I want another proper console Transformers game, though…

wait, so whats the story line here? continued from human alliance? based on AOE/TLK?

I wish these arcade shooters could come home to consoles.

View attachment 27932546
Does it come with a black and white Ravage?

Meh. I thought it was a sequel to Devastation.

I\'m definitely looking forward to this. Human Alliance was something I\'d almost always stop by to beat when at Dave and Busters and this is coming from someone who isn\'t that much of a fan of rail shooters. Seeing this gets me surprisingly excited.

Neat! My wife and I really enjoyed playing Human Alliance together at the local Round 1.

(She was sad that we were forced to kill Skywarp, her favorite Decepticon character since G1, during one of the missions.) Hoping this new game is just as fun!

I played Human Alliance once and enjoyed it. The only place near me that has it is a Dave and Busters.

Looks like fun. Also, Sideswipe is back! I never got to play Human Alliance, so this should be a cool new experience if I can find a place that has it.

Hope it comes to Chuck E Cheese because that is the only place where games like this are worth playing. I don't feel like paying $100 to get through an arcade game.

THA is a cool game but most arcades by me charge $1.50 per credit, some over $2. It just isn't worth paying that much for a few minutes of playtime. I laughed when I saw Time Crisis 5 and the $4 worth of credits it took to play it once. Maybe if it were possible to beat the game with one credit. I could beat the original Time Crisis with one $.50 credit.

And they wonder why arcades are dead in America.

We still have side scrolling in videos games. Some of which are made to look extremely retro so it's not dead far from it. So it's not like you're out of options as opposed to years ago when you only have one option to play what kind of games you want to play.

As for the Arcade it's good to see that there's a sequel showing up.

I hear you man. I grew up on games like double dragon, legend of zelda, and contra. So once they started making games that looked too real I lost interest. Especially those games where you see through the characters eyes…I hated that. I like to see the little man lol.