This toy belongs to Wave 3 of the Armor Turbo Changers line.

“Experience the thrill of conversion with Transformers: The Last Knight — Knight Armor Turbo Changer figures. Convert this Turbo Changer Autobot Hound figure from robot to 4×4 vehicle mode in 2 exciting steps. When it’s time for battle, flip the knight’s helmet over the figure’s head in robot mode to activate Knight Armor.

In the explosive Transformers: The Last Knight movie, new heroes must rise in an epic struggle to forge a future for all. Autobot Hound is a rowdy commando who fights for the Autobot cause. Never one to back down, he storms onto the battlefield with blasts booming from his massive arsenal of unstoppable firepower. “ 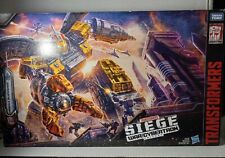 I saw him once a while ago but never reported bc i thought someone else did already. Lol oops.

I picked up this Hound turbo changer yesterday on Long Island. He was the only one there in the Walmart.

Please ship some TR toys to the stores!

The TLK movie did not do so well, whereas your TR line is breaking the bank. MAYBE try selling more TR stuff, and market THAT to the kids?

Thanks,
Long-time fan, currently NOT spending $$$ on your products!

These toaster models are getting more high-tech by the day.

Yes him.Yet I wonder why Hound took so long,barely any reports and he was revealed half a year ago.

Leader Dragonstorm hasn't been released in the US yet either…

Phew,finally main TLK line is ALL OUT IN THE US!!!

When did 1-Step Turbo Changers and Legion Class wave 3 get released in the US?

Phew,finally main TLK line is ALL OUT IN THE US!!!