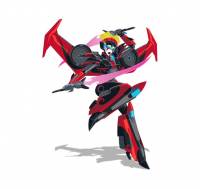 Voice actress Erica Lindbeck‏  has replaced Kristy‏ Wu as the voice of Windblade for Transformers: Robots In Disguise. The replacement will take place on the 3rd Season of the series (titled as Combiner Force).

Though the character is missing from the Opening Sequence, it seems as though she will appear in some capacity in future episodes.

Ms. Lindbeck is best known for her voice as Barbie in the current generation. She is also famous for her voice work on English-dubbed Anime (Mobile Suit Gundam: Iron-Blooded Orphans)

Erica Lindbeck took to Twitter to make the happy announcement:

We wish the actress best of luck. You can check out a sample of her voice, after the jump.

Well the reason she was recast was because Kristy Wu was not available at the time.

Let\'s not forget she\'s Eli from Love Live which is pretty cool.

At least she's back. Fuck, I hate that she left at the end of season 2.

What Happening to Kristy Wu. I guess Her VA was unable to make it back for recording like Zhang Liao VA dub was Replaced By Liu Bei VA dub in DW8XL.

I have no problem with the voice actor being on Transformers RID, I just don\'t want the character back because she\'s not like her comic counterpart and she just has a destiny\'s child attitude I absolutely hate.

Yeah, I know right? I can hardly wait to finally hear Erica Lindbeck's voice as Windblade during "Transformers Robots In Disguise – Combiner Force"!

Why did you attached random pictures to this post?

really glad to see her back, I like her. Wish they would bring JAZZ back though too

If they did, I wouldn't even care about the switch. Just give me Jazz.

i\'m sure she\'ll do just fine. she seems competent and professional.

but damn it bothers the shit out of me that they\'re just replacing the voice of an established recurring (previously main) character. I hope she at least tries to sound alike.

sheesh dude Decepticons like Springload and Quillfire (no disrespect to their characters) who only show up once or twice a season still show up with the same VA as always. Windblade has appeared a whole lot more so that change is gonna be a whole lot more jarring.

I hope that they at least offer an explanation for the switch at a panel or over Twitter.

really glad to see her back, I like her. Wish they would bring JAZZ back though too

Ugh, can we please not have Marysueblade back? Worst character of the show by far.

It could work. I wonder why Kristy left but I can't wait to see how Erika does.

ITS UZUMES TURN!!!
She's sure to finish this stylishly!

Behold your new Windblade and fall into a spiral dream!