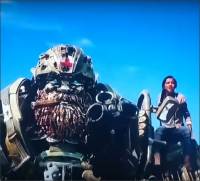 Along with the previously mentioned clip from the upcoming Michael Bay movie Transformers: The Last Knight, a 1 minute long Trailer was also aired during Nickelodeon Kids’ Choice Awards 2017.

The new trailer consists mostly of never-before-seen footage from the movie.

The footage features Megatron and his little backyard bully gang of Decepticons such as Onslaught, Hooligan and Mohawk. Good guys are represented by Bumblebee, Crosshairs, Sqweeks, Canopy, Grimlock and the Baby Dinobots.

The clip focuses of Isabela Moner‘s character of Izabella interacting with the orphaned kids, Mark Wahlberg‘s character of Cade Yeager as well as the Autobots and the Decepticons.

You can check out a low quality recording below, until the official high quality one pops up.

Thanks for the awesome discussion on this thread but it has come to our attention that lots of non-movie discussion and new info are currently going on in here. It's very hard for the staff to moderate such stuff and we may miss cool news hidden beneath the replies.

Since KCA 2017 is over, we've decided to close this thread.

Recently posted toy info has been moved to a new home:
Possible TLK new mold and character, possible SPOILERS too.
You may continue the discussion there.

DA FLIP! where did you find this?

Pretty normal for 15 year olds to wear lots of makeup

I mean in the trailer

There, there. *pats back*

So Quintessa is probably the mo-cap character?

Non-projectile based. (E.g. Not a high yield bomb, missile, or explosive round)

I understand and agree.

Infernocus looks awesome, like the names for his components.

Also, confirmation that "Quintessa" will be the name of a being / Quintesson, rather than the name of the Quintesson homeworld, it seems. But honestly from her outline alone, I like what I see.

Will the Transformers movies be re-released in 4k ULTRA HD BLU-RAY?

Are those deluxe figures?

What the hell are Infernocons? Who's Infernocus? Why does Quintessa look like that? Are those deluxe figures? Will the Transformers movies be re-released in 4k ULTRA HD BLU-RAY?

Actually glad that they went for the Beast Hunters repaint (if they must) instead of Grimstone, at least every character has 2 modes

Ok I was REALLY not expecting this at all.

Could that guy be the "Scenes that may cause a child brief anxiety or fear" cos this looks scary too me and looking at this thing in CGI will be more terrifying.

are we going to see a Predacon combiner!?

Yes by the looks of it.