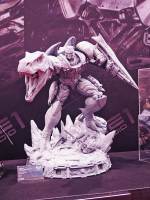 Fresh out of the Winter Wonderfest 2017 in Japan, Prime 1 Studio showed off a grey prototype of their latest statue depicting Transformers Beast Wars Megatron. Thanks to an image from Twitter user @7777_diver, we got to see the highly detailed sculpt of the statue with Megatron in a commanding and menacing pose. In a similar fashion as their Optimus Primal statue, the base of the statue is layered with broken parts of a beaten Dinobot on the ground. No price or release date was announced at time. Check out that full image of the prototype after the break.

Update: Added new images of the statue from multiple angles. 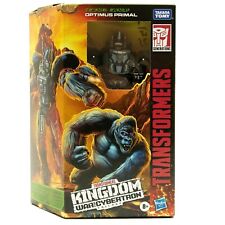 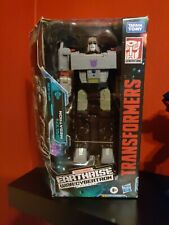 Just arrived. My god Prime1 is amazing but so conflicting. The statue shipping weight is 65 lbs, and of the four I now own (the G1 Megs and Optimus, and Primal) among a handful of other statues, this is the biggest in sheer size. I've got him on top of a detolf and I had to assemble him while standing on a step stool because he's just too heavy to assemble and put into place.

Also I cannot keep the box. The materials are strong enough to carefully pack if the need arises for a move. This has been my biggest criticism of Prime1, they overload the boxes and the packing isn't up to snuff for this weight. Otherwise he's amazing and I can't wait to get my other statues back out and have these all together.

Oh and if anyone was thinking of tracking one down and sneaking it past family or significant others you can forget it. This easily is 2.5 fort max's in size and thats just height.

I did. Mine just shipped today. I bought the exclusive version. This is my last Prime1 studio statue. These are so awesome but just too big to get more.

Got my tracking number for this guy. Should have him by Friday. Can't wait. Anyone else order him?

When I'm super rich, I'm going to have a room built onto my house that mimics the design of the Axalon bridge perfectly, complete with round table & rounded arches for doorways. I'll mount all these statues in there among the rest of my collection. It will be glorious.

I would love to get both this and Optimus, but with how much they cost, I need to prioritize what I realistically can display with the room that I have. Between, SH Figuarts, Figma, MasterPiece, video games, steelbooks, amiibo, MMPR Legacy, Marvel Legends….and some others, I can't get these. Maybe if I ever become rich

looks good but way to expensive for a statue…pass.

They nailed the essence of Megatron in every way.

That's exactly it. Lots of BW reimaginings lose that immediate feel of the character, but this (and Primal) perfectly capture the essence of the character despite the redesign. It's why they'd be so perfect as remake designs because they're super detailed and updated, but still entirely faithful to the originals.

They nailed the essence of Megatron in every way. I like the grinning face best as he always seemed to take sadistic pleasure in blasting the crap out of everything in sight but all the 'portraits,' even though they aren't show accurate, remind me of great Megatron moments.

I'm not one for reimagining or updates and interpretations and part of me even opposes any form of a remastered Beast Wars where they'd keep the show exactly how it was apart from upgrading the visuals and designs as I'm so attached to the originals but I could actually get onboard with something that looks like this statue. They just got it right.

I could buy this… there's a payment plan option… but where would I put it? I'd have to buy a display case and would then need Optimus and definitely a Dinobot if that ever happened… Don't do it you fool! I just need to remember that MP Megatron will exist someday and that will surely satisfy me far more and for a monumentally lower cost.

My current buying-deterrent technique is to imagine bringing a girl I'm into home, walking her past a giant purple dinosaur robot man statue (what the average none Beast Wars fan will see) and inevitably having to explain why I paid a grand for something based off a cartoon I liked as a child. Then again, it'd be a talking point and owning something so expensive, random and unnecessary is a pretty impressive statement. Plus I could use that moment to bypass any brewing romance in the air and cut straight to the good stuff by insisting we watch sone Beast Wars so she can understand what all the fuss is about. If she's not a fan, it'll save us both from wasting a lot of time and energy in a farcical doomed relationship.

Amazing, but I would hate to have this out collecting dust. It would need its own display case

Put my down payment on it. Going to be hard to wait that year for it to arrive. Will masterpiece Dinobot beat him to market?

Orders are open on Sideshow.

I can't wait to this and Primal bookend my collection.

Edit to add: It's interesting there are 200 fewer "exclusives" of Megs than there were Primal.

This is a thing of beauty.

Those spark FX in the photos are really taking away from it, too…

It's beautiful sure, but I just don't feel like I need to own it or even see it in person. I feel like I'm getting the full experience just by looking at pictures.

Unbelievable. If 3A gave us an articulated version of this, I'd absolutely get it.

It's beautiful sure, but I just don't feel like I need to own it or even see it in person. I feel like I'm getting the full experience just by looking at pictures.

Man this is absolutely beautiful, but damn that price ;( I think I\'ll just continuously admire it for now

I'll just put this in the "Things To Put In The Mancave of My Mansion When I Win the Lotto." file.

What does the exclusive version have? Am I just not seeing it?

I'd kill for this thing. May actually end up being cheaper in the long run…

Looks like he has a grimacing face instead of the closed mouth one. The prime1 site also says it has an exclusive "portrait", but I don't know what it is.

This thing is so gorgeous. This is exactly what a BW reboot should look like.

What does the exclusive version have? Am I just not seeing it?

I'd kill for this thing. May actually end up being cheaper in the long run…