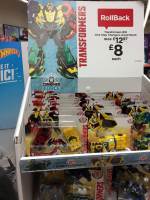 2005 Board member Payres has shared with us an image of a standee in United Kingdom Asda stores. This standee houses several of the new Combiner Force figures that are currently on store shelves, but the art attached to the standee reveals something much more! Pictured on the standee is a Robots In Disguise combiner that appears to feature Bumblebee as the torso, Strongarm and Sideswipe as the arms and Grimlock as the legs. It looks very interesting so far. Could this be what was teased less than a week ago?  Quite possibly.

Click on the title bar to check out the image and share your thoughts on the 2005 boards.

I can totally see Dragstrip and sideswipe as these rivals from cybertron that  hate each other for there speed. and grimlock hating that there is a bigger, stronger, and every other thing grimlock is  good at. Ok so does anyone want to see a episode like the old show were a more intellegent grimlocks makes up Computron  but instead of him having to do a einstien like equastion he make his calculations when he is fighting and be a total badass when he is fighting not Mr.super computeron.

I need there to be a liokaiser in combiner force. I mean think about it, each member has a animal head and animal buddy so they can just make them into beast-a-cons or robots with beast like natures and have the real leader not Deathsaurus and not a repaint of skylynx.

Yeah the Lack of Predacons in Transformers Prime was bizarre. It also made Jackie and Ultra Magnus Gleeful cold blooded Murderers – I did also raise an eyebrow at Ratchet pushing the Blame on Megatron when he was being treated like a squeeky toy by Predaking.
Especially when it was as much Starscream's fault for giving away the location of the lab.

Poor Shockwave's kids – at least he gets to be a proud parent again an again in Emgo316 skits.

Amusingly I think Prime is one of the best animated series of the last decade and RID is a boring, drab attempt to emulate better light hearted action shows that's actively making itself more boring by trying to link to a much better show.

The variance of viewpoint.

Prime came after Animated, which was unfortunate… as it had far less interesting characters, especially Mr Boring Monotone Prime who could never show emotions ("Primes don't party"). It had a few interesting characters like Skyquake (killed instantly), Dreadwing (started to get developed to be interesting then killed off), Breakdown and Knockout (one killed off right away, the other relegated to background character and one-line jokes about polish scratches) and Smokescreen (built up to be the new "chosen one" like Hot Rod only to give the Matrix back to OP instantly and fade into the background), and Predaking (became sentient and interesting briefly then got instantly offed by Megatron because he is STUPID).
The other characters were various levels of boring (BB, Wheeljack, Megatron, Bulkhead), annoying (Miko especially) or one-trick ponies (I honestly felt sorry for Starscream whom the universe… or rather the writers, could never give a break to – and Shockwave who while I liked, could never do more than talk technobabble and be logical, without ever showing ambition to replace Megatron or do anything on his own). Or wasted opportunities, like Arcee, who started out interesting only to fade into mediocrity soon. And it did not help the show that we had two non-entities on both teams, Soundwave and Bumblebee, who could not talk and hence had basically zero personalities apart from Soundwave being able to blankly stare at people for ages.
It also suffered from a very low budget compared to other CGI shows (see Nicktoons TMNT), I don't think we live in the age of BW where they had to kill off characters to introduce new models.

But mostly, the show suffered because Orci and Kurtzmann hit the reset button every time something happened that almost made the show interesting – like Unicron rising (only to be shut down in 2 episodes), Optimus reverting to Orion Pax (for 1 episode), OP dying and Smokescreen almost becoming new Prime (psyhc! not really!), new characters being introduced only to be killed off in the same episode (Cliffjumper, Skyquake, Makeshift, Hardshell) or even world-shattering events like a repeat of the G1 Vector Sigma Key episode being repeated and Earth almost terraformed… only for it to not matter at all in the future. Or how about the PredaconS rising? Like… Plural? Because the show kept promising this and yet when we finally seems to have gotten a whole army of them, they all got killed off because Megatron is an idiot and our "heroes" felt no guilt in murdering what basically amounts to cybertronian newborns. Or, well, more likely because the show lacked a proper budget.

I watched the whole series because it was (western) Transformers animation (I could not make through RID or Armada or the rest) and well, I hoped it could get better, but it didn't. I am glad that RID follows continuity where it must but otherwise tries to do its own thing.

Yeah, it's their separate toy-comic only fanficcy reality. I mean, "Wandering Roller"… did Roller turn out to be a decepticon in IDW comics? Nope, not really.

Without Knockout around, no-one really has the incentive to bring him back. More likely this will be a guy called Breakdown who looks like the Stunticon and has nothing to do with the other guy (wasn't he called Brakedown, without the "ea"?)
My guess is the team will be Motormaster, Wildrider and Breakdown (we have a crash combiner called "WildBreak" and we know ) and Dragstrip.
I also wonder how and where Stormhammer and Skysledge will fit in there… and whether we can get proper Warrior toys of them.

I'm sure these things transformations will be on par with this beautiful gem.
View attachment 27668438

Hmm. I actually applaud Hasbro for not bringing Breakdown back from the dead! Really cool that they seem to be sticking to canon there. In fact, I think it would be totally bad ass if this Menasor used to be a 5-bot combiner, and is now coming to earth as a 4-bot combiner to avenge their fallen teammate. I know Breakdown wasn't played up as being/having been part of Menasor in Prime, but that would be cool if they added some deep story elements like that.

Anyway, I'm also super worried that the toys for these guys could be shittier than the Crash Combiners. i.e. 4 One-Steps without even a robot mode that form an un-articulated, hollowed-out brick. Hasbro's been pretty strict with their Warriors Class by not changing sizes or adding high-level gimmicks, so I seriously doubt we'd get 4 combining Warriors here… one can only hope, though.

I would assume Motormaster is in. Based on the Walmart shelf tag we can likely expect Dragstrip and Wildbreak. That would leave us to wonder if Dead End (who was a Wheeljack repaint in Prime) would show up again or if they'll go with Offroad so they can potentially reuse the Strongarm mold when toys are made.

I was being sarcastic. Haven't figured out how exactly to use blue text… I don't normally partake in RID, but… I kinda like this. I have my doubts the real toy would look this good.

Is it me or does one of the cons in the group photo lf rhe Stunticons look like Overload? He even has the mohawk.

He looks messed up that way. Dammit. Hasbro keeps doing that…. should I be concerned about what Hasbro employees look like?

That's clearly how it's supposed to work, yes. Obviously.