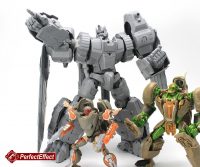 Through their Facebook page, Perfect Effect reveals their next figure to be PE-DX06 Beast Gorira, an iteration of Optimal Optimus as seen in Season 3 of Beast Wars: Transformers. From the images provided, this figure appears to be highly articulated and is equipped with individually articulated figures. It is even able to fold its arms across its chest despite the figure’s brawny physique.

The figure is pictured together with Generations Rihonx and Rattrap, which put the figure standing at about 11-12 inches tall. Perfect Effect has only shown Beast Gorira in its robot mode for now, but they have announced the 3 additional modes will be shown during the upcoming TFcon, held in Toronto from July 15-17. Until TFcon comes around, check out the iamges after the break, and let us know if you will say yes to this iteration of the Maximal leader.

If anyone is interested, as of this afternoon there are 2 Dark Gorira’s available at Toy Dojo.

Most pe stuff is rare after stores are sold out. Try finding a pe-dx02… and if you do, let me know.

Because it's been a while since the reissue came out, and it's all sold out again.

so….anyone know why this guy is so rare now? been looking for one for ages now (im in uk) and cant find the re-issue version.

any chance anyone could get a pic of him standing next to either siege or ER prime please? i know hes not exactly chug,but im curious as to how it'll look

Hi Everyone, it looks like Beast Gorira will be coming in shortly followed very soon after by Mega Doragon! We should have them both in hand by the end of next week if all goes smooth. The wait is finally over! If you haven't already, you can get your orders in below.

How can you tell the difference between the reissue and the original copy of beast gorira on the box? Cause we all know the ratcheted waist and stronger joints for the figure itself, but I can’t find anywhere a description to say how you can tell before opening it. I only want the reissue and unfortunately lost my chance on tfsource, and don’t want to get one from a aftermarket source, open it, and find out I bought the first wave from someone who either lied to me or didn’t know the difference himself.

I finally decided to get this guy from TFsource yesterday! I've also been going back to this figure every now and again but never made the decision to buy him. Lately, I've been reworking my shelves and have been thinking about my Beast Wars shelf which will have the JX TM2 Megatron on it (he's still boxed up until I make the appropriate space). That Megs needs a suitable figure to go against. I know PE Optimal Optimus is smaller but I think it will be a great contrast. Can't wait to have him in hand.

Did BB7 ever release their KO?

After about a year of continuously looking at this guy and being on the fence, I finally pulled the trigger and got him from TF source last week along with Perfect Effect’s Godforce Warrior. I couldn’t be happier with either figure. I’m absolutely over the top happy to finally have this guy. He is a great quality figure and just totally fun to mess around with. I love the fact that even though not documented in the instructions, you can give him his cartoon accurate flight mode with the arms straight out, or the perfect effect version. Just a great figure all around.

@Hoffman IIRC, there was a reissue last year. It fixed some issue with the waist.

After hemming and hawing over the figure since it's release, I finally got one. Decided to go with the black version. Man, he is chunky! Haven't attempted transforming him yet, but so far, I like it. Kinda wish the shoulder guns retracted into the torso though, instead of just flipping up and over.

Did a reissue for this ever come out? A3U has one listed still for pre-order, but the release date was for some time last year.

…so when're we going to see perfect effect's next perfect beast offering?..the first three figures all seem to have been very well-received…

If anyone’s interested, I’m selling my Gorira for $150 shipped in the U.S. Click on my sales thread link in my sig to see a pic.

After waaaaay too long of deciding if I needed him. I pulled the trigger and don’t regret it for a second. This guy is fantastic! Poor POTP Primal is feeling a bit left out now.

Him. Not him. lol. That's what I get for typing on my phone with nothing but fat thumbs.

But seriously, I like this guy so much I went ahead and ordered Nemesis Gorira (and his transforming black mini monkey companions). This has to be my favorite mold and him done in that black Optimus Primal deco has me in love. I have NO Space for him, but I'm gonna find room somehow, even if I have to buy a new shelf just to have somewhere to put him.

Preachin' to the fat-thumb choir, buddy. I hit the delete key more than any other key on this dang minipad.

I almost regret having jumped on Gorira so soon after it was reissued! I rather like the nemesis colors, but either way it's still a great mold!

Him. Not him. lol. That's what I get for typing on my phone with nothing but fat thumbs.

But seriously, I like this guy so much I went ahead and ordered Nemesis Gorira (and his transforming black mini monkey companions). This has to be my favorite mold and him done in that black Optimus Primal deco has me in love. I have NO Space for him, but I'm gonna find room somehow, even if I have to buy a new shelf just to have somewhere to put him.

I just got this guy from BBTS and absolutely love gim

Awww, gim loves you, too.

I can't wait to make some room on my shelf for him. He's still waiting for me to liberate him from his cardboard prison. Soon. Sooooon.

I just got this guy from BBTS and absolutely love gim

I have a new one in box, need space, anyone in Canada interested for the Gorira V2, let me know.