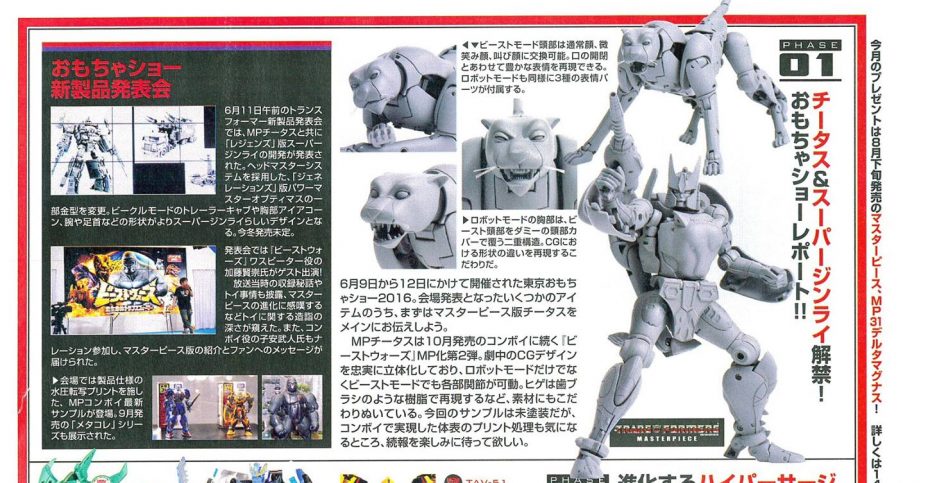 The Loopaza Mega Store on Facebook has updated with scans from Figure King No. 221, which shows off a wealth of upcoming goodies from TakaraTomy.

First up, we have a handful of Masterpiece Inferno images. These show him off in all his glory in both modes, displaying his robot mode posability as well as the clever “ladder folding into the torso” bit.

Next, we have a Shogo Hasui interview. Although it hasn’t been translated as of yet, it looks to be concerning Fortress Maximus, including some sketches of the big guy and an interesting comparison photo with Cerebros standing next to his fellow Autobot Headmasters Hardhead and Highbrow – showing that he is about a head taller than his companions.

Finally, the last page displays a menagerie of upcoming product, most notable of which being Masterpiece Cheetor and a small photo of Legends Super Ginrai.

Check it all out after the break!

Update: Thanks to a few helpful TFW2005 board members, we have a translation of some text from the scans. First, RodimusZero tells us that Super Ginrai is quoted as being scheduled for release sometime this winter, although the exact date is TBA. Next, we have the translated Shogo Hasui interview courtesy of Emperor Bruticus IV, which you can check out by reading on.

“Inferno’s text mainly talks about him being a Season 2 figure and how many of the season 2 guys were service/emergency vehicles etc..
The text just talks about representing the toon and the range of movement in his transformation and poses. The most important aspect is he is a Licensed Mitsubushi Fuso T951
I believe he uses an accessory that projects forward to be able to hold Red Alert to replicate “Facing a best friend”.

So the Shogu interview goes something like this.. Hasui joined during the Beast Wars era.. then went on to Develop the great MP 10 after the Masterpiece series work he returned overseas to the team to be in charge of the Combiner Wars line.

Metroplex showed there was a market a demand from fans for a Titan class, that could be its own independent line and could work with the same play pattern as the generations line. To develop such a large figure is difficult with budget constraints as the budget only allows one of these size class figures per year, to not delay and miss the optimal timing of the headmasters line parts of Metroplex were used to reduce the development costs.
(The next paragraph is confusing) But it goes something like: The head on noise gimmick was important and the correct sounds for both modes were to be implemented for play value. Changing some of the parts from Metroplex to look like Fort Max raised questions on how the Die’s would react to different resin & metal parts in addition to the number of screws. The development process was subtraction and addition of new parts to Metroplex to keep the weight similar as well as cost.

Enough deformations were achieved to differentiate him from Metroplex.
We recognise the overseas market and understand fans in different territories have different renditions of the same character, so different versions were developed ie: Cerebros to represent The Rebirth & Fortress to represent Headmasters, to cater to different tastes.

The headmaster is designed to be able to interact with the other figures from the series height wise, without loosing the balance of being too small to look like the Commander figure.
The care put into this figure was like the Masterpiece line, taking play value, media renditions and toy renditions into account.
Its hard to translate a portion of the text but I believe it says the Headmasters will continue in both classes and the 2017 characters have been determined.

MP Cheetor just talks about the different expression heads for beast mode and how the whiskers for the prototype were delicate.
Great care and attention to detail was put into achieving a good texture for the fur like Primal.” 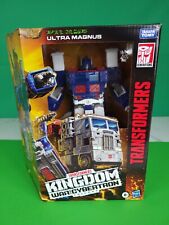 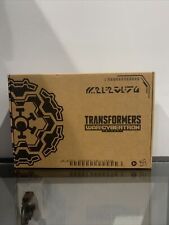 I COMPLETELY agree but I don't think they would give us a headmaster Trypiticon. Not unless they make one of his car accessories a headmaster?

Since Trypticon lacks a traditional bot mode, I don't expect he'll be made a Headmaster.

Plus it's very likely he'll be the introduction to whatever theme is coming next after Titans Return.

*snip* I feel we may see a MP Chromedome in 2017 developed by Hasui as a biproduct of his current work*snip*.

Can you explain this a bit more? I'm interested what you mean exactly he said. Thanks

What are those AOE Optimus and Bumblebee figures?

Those are called Metacolle a takara die cast 3" figure collection

The Headmaster theme continuing in 2017 has me really worried for Trypiticon. I would prefer he didn't have that gimmick. If it's a prerequisite, I would have liked to have known before voting. Scorponok would have been better in that case.

I COMPLETELY agree but I don't think they would give us a headmaster Trypiticon. Not unless they make one of his car accessories a headmaster?

It can be faked but since i first saw this figure im wondering if it's just another add on face for bot mode and you can change out for a regular head on his chest. Time will tell

So is Hasui coming back to the MP line?

No he's working here in the states on Combiner Wars and Titans Return lines. (^ _^)_S

Mp Inferno is so clean looking and I'm really blown away by his looks. I was never a BW fan and could care less about that line. But Cheetor looks very good also.

Great info. I do hope someday Hasui will return to the MP line. And hopefully the budget will increase for each figure.

So is Hasui coming back to the MP line?

I am done collecting Beastformers, but I would be lying if I said Cheetor was not one of the best, most impressive looking Masterpieces I have ever seen. They completely outdid themselves on this one.

What are those AOE Optimus and Bumblebee figures?

These are metal collection aoe prime and bb which is a tomica/hot wheel sized figure
Just imagine a robot toy coming in a tomica sized box. They did them for avengers 2 as well and is about 10 bucks I think. They are developed by Tomy rather than Takara

No problem guys.
That makes sense Liam, I wondered what those parts were when I first saw them.
Yes I believe so, It seems he is working very closely with Hasbro on these lines to represent the US and JPN version aswell as sharing the costs. I'd say Hasui probably was promoted rather than demoted like others have supposed. The lines he is working on are mass release items that will generate the higher overrall income.
I feel we may see a MP Chromedome in 2017 developed by Hasui as a biproduct of his current work.

If that is the case,a MP of Chromedome & his gang of headmaster is what i am hoping to see too.

im taking em all maybe even the diaclones. is mp10 spike too big to ride in diabattles?

animal TFs are at their best when they're not expected to look like non-mechanical organisms. shame they'll probably never go for any of geewun's beast/monster TFs of note.

Cheetor looks like c? WTF are you talking about are you just new to the character in general?

im taking em all maybe even the diaclones. is mp10 spike too big to ride in diabattles?

animal TFs are at their best when they're not expected to look like non-mechanical organisms. shame they'll probably never go for any of geewun's beast/monster TFs of note.

I wonder if it's still possible to have the actual cheetah head on the front instead of the fake one?

Yeah. I hate that cheating, no pun intended, when it isn't needed. If this was masterpiece dinobot, by all means cheat away.

I wonder if it's still possible to have the actual cheetah head on the front instead of the fake one?

Nice, Fake cheetah head is the way to go, It's the only way we'll get an accurate Dinobot if they ever do him.