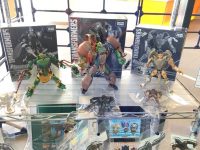 The pics from TransFes2016 continue to come in as now we have some shots of the Beast Wars 20th Anniversary trio of Rhinox, Rattrap, and Waspinator from Takara, as well as prototype images of the upcoming Masterpiece Optimus Primal, who is displayed with all his accessories.

Check out the pics after the jump and join the discussion below to share your excitement for Takara’s celebration of Beast Wars’s 20th Anniversary!

Not long now, guys and girls. The 20th Anniversary celebrations will kick off with MP Primal!

TakaraTomy have been uploading the Beast Wars episodes to YouTube over the last few months, and the preview icons have always intrigued me.

The first six all featured Cheetor, then low and behold, MP Cheetor was announced. Tigatron has featured in more than his share of late…

Here it is. The final piece of the DEICIDE puzzle.

The script for Issue #4 of TRANSFORMERS: DEICIDE.

The script for Issue #3 of TRANSFORMERS: DEICIDE is now online!

Of the four issues in the series, this was the most enjoyable to write. Why? It'll become obvious once you cast an eye over it, but let's just say the old team is back together…

The script for Issue #2 of TRANSFORMERS: DEICIDE is now online!

My celebration on the glorious 20th Anniversary:

I finished watching the BW2 series. (42 episodes + the Movie + another episode featuring the Metals/Transmetals)

Brilliant efforts brought forth by the Karyuudo team!

I celebrated by writing an article expressing why I love the show:

I also took to pen and paper to mark the occasion. I put together a 4-issue comic book story called TRANSFORMERS: DEICIDE which I pitched to IDW. The script for Issue #1 is online for you to enjoy, and I'll be uploading those for Issues 2, 3 and 4 soon.

I read that article when you posted it, and just reread it now. Loved it, Sol, thanks for taking the time to summarize what was my favorite show and era.

I celebrated by writing an article expressing why I love the show:

Just enjoying Primal and Cheetor probably. Already "honored" BW several years ago by getting a ton of them customized and dedicating a display cabinet for them.

I'm going to rewatch it and pick up a Unit 3 when I have the chance.

So, besides playing with our MP Primals in October (and maybe/hopefully MP Cheetor in December (cross your fingers!)) what are people doing to celebrate the anniversary? TakaraTomy have really rescued the year while Hasbro are ignoring it altogether, but what are you doing in your own time to celebrate?

Cracking the toys out of storage?
Re-watching the Emmy-award winning show?
Having another look at the 10th Anniversary comics?

On display at TTS2016. The Transformers Fes 2016 exclusives will also be sold at TTS.

I am really loving the new decos, just the right side of metallic in both modes.

They look so gooooood. I only have Waspinator, but I'm hoping to get the Rhinox and Rattrap before they sell out.

TakaraTomy have announced that the LG-EX Beast Wars figures will also be sold at the upcoming Tokyo Toy Show.

Oh thank goodness. Hopefully BBTS will have it this time around. I mean I don't mind e-baying waspinator, but I rather have a general idea of what the box condition is going to be.

TakaraTomy have announced that the LG-EX Beast Wars figures will also be sold at the upcoming Tokyo Toy Show.

Excellent, hopefully that means they become slightly easier to find.

Where can I get these? Are they a TT Mall exclusive?

Depends where you live I guess. I live in the UK and got them from Kapow Toys. I believe The Chosen Prime also have them.

Incidentally I am selling my Takara Generations Rhinox and Hasbro Generations Rattrap as a result of receiving there, PM me if you are interested.