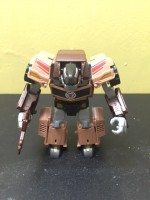 TFW2005 member Negronicus has also provided us with our first in-hand images of Robots In Disguise Warrior Class Quillfire! Again, another Decepticon to help bolster your RID Decepticon forces! Negronicus shares with us multiple views as well as some in package shots.

Check out the images after the jump!

Through a quirk of fate the local stores have graced me with offering Quillfire and his direct repaint Scatterspike simultaneously. I decided to side with Scatterspike, but as Scatterspike doesn't have her own review thread (and deserving so since she's just a straight repaint of Quillfire) I'll just attach my thoughts here.

Now, unless you absolutely have to have Quillfire because of his cartoon portrayal, which I admit I like, Scatterspike's color scheme is more eye-pleasing between the two. Or, perhaps it's because Scatterspike is more reminiscent of Stunticon Dead End.

I really like how the car compacts on this figure, it's just the roof just kind of hangs there in the back without tabbing into anything.

Quillfire obviously has the needle spine dagger, which at least can fit in with the rest of the quills in the back as storage, but that's a bit of an annoyance in car mode. The gun at least seats nicely and can be removed and replaced trivially.

Scatterspike being a fem-bot is obviously an informed attribute (such as Blackarachnia's original Beast Wars toy). It is somewhat helped by the fact that Animated Strika has a rather similar build and color scheme. Said color scheme is different enough from Quillfire that I could reasonably believe it (doubly so since Quillfire's toy color scheme is a little uninspired), but I wonder if painting a crest on Scatterspike's head would help with that (I suspect just glueing on a crest would interfere with transformation which is why Hasbro opted not to give her a new head).

While this figure is interesting to look at, it being an animal creature is almost an afterthought seeing as how that's only really conveyed by the bed of quills hanging out the back. You could easily drop those entirely and Quillfire/Scatterspike could look like a normal bot. Perhaps for that reason I'm not as "blown away" with it as I have with some of the other animal Decepticons as after a fashion this guy looks a little on the generic side.

Think it over, remove the quills, add bulkheads head, & change him to two tone green & who do you have?

It was probably designed for both

Not sure what can be done about the Quasimodo stance/head assembly, but yeah – not much else needed to Strongarm this figure into a Bulkhead.

I bought the Takara version during HLJ's sale a couple of months back and it just arrived yesterday along with Fracture and the mini Strongarm.

I love the design on this toy. Not being a standard robot really allowed Has/Tak the freedom to design a cool toy. Being so short and compact really works to his advantage to where he really doesn't have the "hollow" and lightweight appearance many of the other warriors have.

I also found him at my local Wal-Mart. Really fun little toy that's completely unique. I'm not even collecting RID, but I had to get this toy. I really like how fun and different this mold is.

I got him today, the Hasbro vers!

Love him because he is so unique, but kinda hate how little everything locks in bot mode

I also found him at my local Wal-Mart. Really fun little toy that's completely unique. I'm not even collecting RID, but I had to get this toy. I really like how fun and different this mold is.

I got him today, the Hasbro vers!

Love him because he is so unique, but kinda hate how little everything locks in bot mode

I noticed tonight that his head could turn left and right a few degrees. I was somehow convinced it was fixed, but no, the whole assembly is on a pivot.

Robot Mode: Let’s get my one complaint about this toy out of the way first: both in the cartoon and on the packaging of this very toy, Quillfire has his trademark insignia on top of his head. The toy itself, though? No insignia to be found. Not quite as bothersome as an entire line of mostly unpainted grey robots (I’m looking at you, Dark of the Moon), but still: it’s such a little thing, surely the cost for adding that little paint app wouldn’t have blown the budget, would it?

Apart from that, though, Quillfire is a very, very cool robot. He nicely translates the look of the cartoon character into toy form. Sure the mane of quills on the back of the head isn’t quite as bushy and majestic as in the cartoon, but that was to be expected. He is broad and stocky, looking very powerful and his animal head gives him a dangerous air. Articulation is good and one can even move the entire head assembly back and forth a bit.

For weapons Quillfire comes with a gun (which, strangely enough, does carry the insignia missing from the figure itself), as well as a single quill missile he can plug into the back of his head (the other quills are static) or hold in hand as a kind of knife. To sum it up, a really well-done robot mode, which sadly makes the missing insignia stand out all the more.

Alternate Mode: Quillfire apparently scanned his vehicle mode at the same dealership as Bulkhead, transforming into the same type of SUV. Coming in two shades of brown, the car looks pretty realistic and there are no visible robot bits, so thumbs up for that. A bit more detailing would have been nice, but overall this is a very nice car mode. Quillfire’s gun can be stored underneath in the hollow of his robot mode shins. So bottom line: no complaints here at all. A very nice car mode.

Remarks: Quillfire was one of the many Decepticon criminals escaping from the crashed Alchemore. Now free on Earth he immediately took up his old quest to launch a revolution… against pretty much everybody, it seemed. He attacked everything he regarded as some sort of authority and liked to leave his insignia behind wherever he went. He was apprehended by the Autobots multiple times, but managed multiple escapes as well. Last time we saw him he was once again snagged, this time by Grimlock, and put into stasis once again.

Overall Quillfire is a very nice toy. Just about the only bad thing I can say about it is that it’s missing Quillfire’s insignia in robot mode (something the Takara-Tomy version fixes). Apart from that, though: no complaints at all. Robots in Disguise features tons of very innovative-looking Decepticons and we need more of them in toy form. Quillfire is definitely looking good and a must for any fans of Robots in Disguise or unusual Transformer designs.

Yeah, under the rear end of the vehicle behind the wheels.

Any gun storage in vehicle mode?

Picked this up today with the intention of doing it into a custom.
Overall, the articulation is nice and the transformation is intuitive. If I actually cared for the show in the least I'd be happy with it.
The alt mode does resemble Bulkhead in person, but if they do it into him, it'd be a massive disappointment as this figure is practically a midget.

Incidentally, the opening hood in alt mode is a really nice touch.

Does he have some kind of tail in the show? You can sorta unfold the backpack to form a tail in robot mode.

You can also stick his knife accessory in his rear hole to make a tail.

On HTS They have him as a "Weaponizer Version". What are the differences between that and the regular release if there are any?

There aren't any differences their just packing the Warrior figures under a new subtitle.

Odd though that at Botcon Quillfire and Thunderhoof's packaging had them under this weaponizer branding but when I got my its under the normal packing.

On HTS They have him as a "Weaponizer Version". What are the differences between that and the regular release if there are any?

Certainly a lot of personality in this figure. Overall great look and fun quick transformation. Happy to have added it to my collection.

Not sure why be this guy is looking appealing

The Takara version is an absolute winner to me. Hasbro version looks to light, but looks like he's getting a better looking repaint soon.

Simple, chunky, but oozing character. MUCH better than some of the earlier figures like Steeljaw. Paint also helps these figures.

Picked this up along with TAV Fracture and Thunderhoof. All winners in my opinon. More RID Decepticons please!

Got Quillfire from HTS. Man is this guy unique among the Decepticons I have gathered in the past seven years. Squat and really weird looking, love the spikes on his back. While he has not appeared much on the show to make an impression on me like others who have Warrior figures like Steeljaw, Fracture, or even Thunderhoof, I still love this figure and highly recommend him. He and Thunderhoof are a clear good sign of the future of RiD15 Warriors with the likes of Windblade & Bisk on the horizon to boot.

Yeah, that alt mode is Bulkhead all the way.
Not liking the design all that much, but at least it's… unique.
Swap the head out with a bot head and it could be the start of a good Brawn/Outback custom.

I immediately saw Bulkhead when I saw that altmode. The toy went from a possible but to an instant buy because of that snaziness.