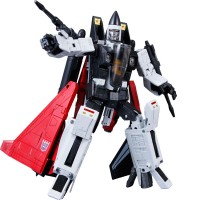 Takara has just updated the Takara Tomy mall for a new Masterpiece listing – Ramjet! In what is hopefully the first of three conehead Masterpiece seekers, Ramjet is shown here in robot mode and jet mode. He is listed as MP-11NR, so that indicates he will be using the MP-11 mold as the base mold for the figure. He is scheduled for release in late February, 2016 and will run roughly $134.00 US. It looks like Takara will not be holding back on Masterpiece releases for the 1st quarter of next year!

Check out the images and join the discussion by clicking the title bar!

Seems like a good price, alright. Even if we get V3 Seekers somewhere down the line, there's no certainty that they'll be remoulded into the Coneheads. So if you want these characters, this is probably your best chance at them.

Finally pulled the plug. $105 for MISB. If he has floppiness or shoulder problems, I'll be able to tell Takara since I'm in Tokyo. Patience is a virtue. Damn good price but based on QC, it's prolly appropriately priced for what I got him for.

Sorry to bump this up. But after seeing how I might buy Dirge, it might make sense to collect all cone heads. But how’s your copy holding so far? Is the price still a murder? Or is it under $110?

If he's available for $125 I'll bite. But maybe wishful thinking

How problematic are the shoulder issues? Is it a plague? Cheapest I've seen him is $160. Sad

I really couldn't say, I didnt have that issue but It certainly seemed that plenty of people did.

Personally I really liked Ramjet, he is actually one of my favourite MP. I am happy I bought him.

And thanks guys. As buttzilla stated, at his premium price, it's a tough choice.

Also, while I have nothing against KO's capitalizing on a market when the official companies fail to, and the quality of these KO's has been very good, in the Conehead case they are not as accurate as the TakaraTomy releases. Which like most MP releases are not near as problem-plagued as all the drama would leave you to believe. Still, TakaraTomy can and needs to do better. Their releases have been inconsistent quality wise, and that just doesn't cut it in a premium line.

Yes, I haven't noticed any issues at all with mine. Mine was well priced but I am in Australia, I can understand the hesitation if you're having to pay big $

How problematic are the shoulder issues? Is it a plague? Cheapest I've seen him is $160. Sad

Yes, I haven't noticed any issues at all with mine. Mine was well priced but I am in Australia, I can understand the hesitation if you're having to pay big $

Also, while I have nothing against KO's capitalizing on a market when the official companies fail to, and the quality of these KO's has been very good, in the Conehead case they are not as accurate as the TakaraTomy releases. Which like most MP releases are not near as problem-plagued as all the drama would leave you to believe. Still, TakaraTomy can and needs to do better. Their releases have been inconsistent quality wise, and that just doesn't cut it in a premium line.

I surprised to hear that some Ramjets are floppy? My figure is actually quite stiff. However my Thrust does have some mid section floppiness.

I surprised to hear that some Ramjets are floppy? My figure is actually quite stiff. However my Thrust does have some mid section floppiness.

I just got the Yes Model Dirge figure in. My god it is awesome. I wonder if I should still get the other coneheads in any capacity. I didn't have a big attachment to the like the F-15 seekers. Blue is my favorite color, so Dirge checks this perfectly. I got Skywarp, Starscream (Ghost flavor and MP11 Long Life Design), and Thundercracker as Takara plus Acidstorm and Sunstorm as Hasbro masterpieces.

One of my friends just showed me his Ramjet. God that thing is shaky. But the seekers seem fine to be with no shaky parts except my Takara Ghost Starscream.

Too many choices, but not enough space. I may just get Bitstream Yes Model and then can it for all the seeker molds. What to do, what to do?

Looks with Floppiness and bad QC:

Performance QC and money worth with tons of accessories: You can probably grab both YM Thrust and Ramjet for one Takara Ramjet price wise.

Does anyone recommend I buy this or the yes model conehead? Not sure if it's technically a direct KO but seeing how much QC this transformer has suffered I'm not sure which way to go since I dk prefer first party. Thoughts?

Does anyone have a photo showing what would be wrong about the shoulder? Wondering if my Ramjet has this issue or not.

Ok, here are the details of how I swapped my shoulders over to fix the wings not tabbing in correctly.

First, this is what it looks like if your shoulders are the wrong way around – You are looking for the small black piece that attaches the shoulders to the body. Note how the black sections that attach the shoulders to the body have one side that is slightly longer than the other. If yours is miss-assembled the longer portion will be towards the back like in the pictures below. This will prevent the wings from tabbing in correctly. We need to swap the shoulder attachments to fix the issue: This image shows the difference between correct orientation of the pieces (Thrundercracker on the left) and incorrect (Ramjet on the Right): 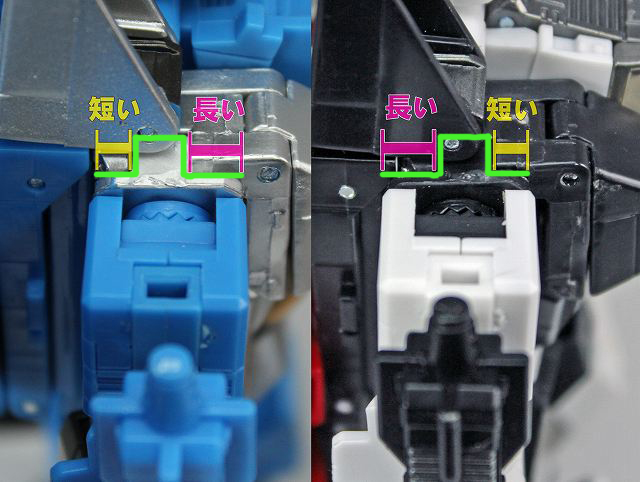 These are the tools I used – You will need a couple of cross head jewellers screwdrivers a hammer and something small to push the pins out (I used one of the small flat headed screwdrivers for this). Not pictured but also required a small board (like a wooden chopping board) to use when hammering out the two pins and a cup of tea First, before we start doing anything major we need to strip him down as much as possible to make it easy to do the swap. Start by removing the larger weapons, the null rays (just pop them off the ends of the supports, you can leave the supports in place) and the front wing sections. The front wing parts are just attached at the hinges on the sides of his back. You can carefully pull these off without damaging anything as they are only clipped in: Next we want to remove the main wing sections. There are two screws on each wing, one small one, and a very tiny one, remove both of these and the wings will easily detach (the red wing and the small white section that the screws go into both come off): Next we want to separate the entire front nose and cockpit assembly. Slide this forward as far as it will go and arrange the arms and chest sides to expose the two screws that form the slide. These were pretty tight on mine, but did unscrew with a little force: The second picture is what we are removing

Note the large bowl for keeping screws and other bits in. I HIGHLY recommend getting something similar that is not easy to knock over and can be used to store all your precious bits!

OK, now we've stripped him right down, we can start taking apart the arms and swapping the shoulders! Locate the two screws on the back of the biceps on each arm and remove them: Next you are going to need to remove two glued down screw covers, one on the back of each arm. I used a tiny flat bladed screw driver and just pushed it gently under the edge of each flap to loosen mine, pushing in gently at several places between the cover and the arm along the thin edge. Both came off fairly easily, but one was much more glued than the other so your mileage may vary. Use the same flat-bladed screw driver to scrape out any little bits of glue that are left on the arm so you can cleanly glue these back when done and remove the 3rd and final screw from the arm: Now we can remove the arms! Gently pull apart the top edge of the shoulder blocks with your fingers just enough to remove them from the black shoulder joints. Don't worry if you pull them completely apart, they are easy to re-assemble, but if you do it carefully they should come off easily and stay pretty much in one piece leaving just the parts we need to swap still attached to the frame: Now we need to remove two pins. At this point you should go and look at some videos on how to remove pins! I cannot stress this enough! I take no responsibility for any damage you cause doing this next part…

We need to remove the two pins that hold the chest flaps in place. That is the two pins on the left in this picture: When removing the pins you need to make sure that you remove the knurled (rough) end first. When I did mine I found a wooden chopping board that fitted between the two halves of the frame and used that to support the figure while I gently tapped the pins out with a hammer and very small screwdriver. Just tap a little bit out first and check that the end that protrudes is the rough one. If not, tap the other way. What you do NOT want to do is push the knurled end all the way through the joint. This will be really tough to do, and will also destroy the joint most likely!

Once the pins are knocked out you should find that the rest of the assembly simply slides apart to give you this: I managed to damage one side of my figure when removing the pins. It was not a problem though, a small dab of super glue after refitting the pin was enough to make everything super secure again and the repair is invisible. This pin is not part of the main transformation, it only hinges the front flap of the chest so is under very little stress. Obviously you want to try and avoid any damage (Watch some videos of removing pins! Be VERY careful to support the work properly!) but if you do have an issue like I did don't panic. It's all fixable

Here is a picture of what you don't want to see! Almost there! How all we have to do is swap the two offending pieces and re-assemble everything. The pins should push back in fairly easily. Just tap them into flush with the hammer at the end (Make double sure you have the shoulder joints the right way around before doing this of course! Long side forward!) and the rest is easy to screw back together: And now the wings tab in beautifully! (err… shame I didn't tab the hip panel in properly before taking the pics tho