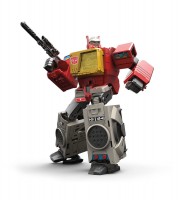 Coming in from our team at NYCC, we have received official Hasbro images of Leader Class Blaster! This figure can transform from Blaster’s traditional G1 alt mode of a boombox, to robot, and to a battle station of sorts! Blaster is also compatible with newly designed “tapes” such as Rewind and Stripes.

Check out the images after the jump! You can also see in-hand images of Blaster from our coverage here. 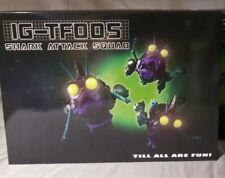 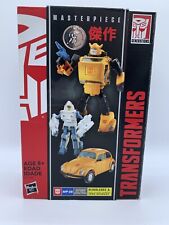 I'm glad i'm not one of those kids…

So where is the "digital" play button, I'm not seeing any?

Awesome! I need a nice Blaster for my large scale CHUG/IDW collection. So happy he isn't little person sized!

Makes transistor a tougher decision for my MP shelf.. Need to see this one in person

my only gripe is he has an empty square below his chest right where some sweet silver tape deck buttons should be.

my only gripe is he has an empty square below his chest right where some sweet silver tape deck buttons should be.

Meh. I don't really care for Blaster but I might get Soundwave.

I just saw that one thing everyone else is questioning/laughing about.

Back on topic, I wasn't planning on getting this guy, but he would look good next to my G1 Blaster (one can never have too many Blasters, after all)

Someone needs to compare this Blaster with KFC's version.

Wow. I noticed it but thought it was something else… Maybe?? Blaster looks great btw. Could very much be my masterpiece stand in.

Holy Crap… it looks fantastic next to MP Soundwave…

Now, I have to wait for the Takara version, Which I hope it would have more of a "Crosscut Silver" instead of a "Shitgrey" Plastic colour… and also, I hope that it would be visorless… Sadly, its going to be more expensive than usual Takara Leader size prices… kinda almost like the price of MP Datsun…

I was all ready to skip this, but being the exact size of G1 Blaster…

Suddenly it's a lot more attractive.

I'm still wondering if you can put the helmet on halfway to make it look more toon inspired? Or does that hinge prevent that?

man he is bigger than I expected