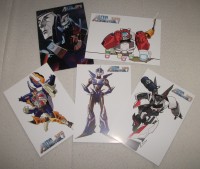 August 21st is fast approaching, and with it, Auto Assembly 2015! Next weekend sees the (sniff) last-ever Auto Assembly kick off at the Hilton Metropole in Birmingham, England!

With just a week to go until the convention, Auto Assembly has been updating on what we have to look forward to at this year’s con. First off, there is news of the packages being given to every pre-registered attendee. This year’s goodie bag includes a full set of the Auto Assembly 2015 postcards (pictured at left) featuring artwork from Ed Pirrie, Alies Meerman and Kris Carter. These feature the characters voiced by the voice actor guests of honor – James Horan, Sumalee Montano, and Peter Spellos. There’s also a somber Galvatron / Leonard Nimoy piece, and one of Swerve in full bartender gear, getting ready to “call time”. In addition to the postcard set, the first 1,000 people to have registered for the convention will also receive a copy of our 32-page convention comic Fire and Iron along with the 28 page convention magazine The Cybertronian Times.

That is not all, because Auto Assembly have also published the schedule for this year’s convention. There’s a lot of good stuff going on this year – highlights include The History of Transformers in Japan on Friday, a retrospective on Transformers UK comics on Saturday with Simon Furman and Andrew Wildman, a third party panel and a Japanese artists panel on the Sunday, and a special treat for full weekend attendees – Saturday night will see James Horan in cabaret!

All good things must come to their end – be there at the Hilton Metropole in Birmingham, UK, for the weekend of August 21st – 24th to see out the final Auto Assembly with a bang!

I remember seeing you walking about as Cyclonus – fantastic work!

Hoping to pick up some Japanese beast wars.

Get another sig from mr spellos

First one ever for me… Shame it'll be the last.

Make it great guys and send it off in style.

Damn it i really wish i could of gone this year.

I may have to defend my title in the quiz.

I can't wait for Auto Assembly! Shame that it's going to be my first, last and only time there.

My only interactions with him have been online, but I so wish I could see him in person. Especially the last event. Really wish I could go.

It's amazing that the fans came together to make this happen, don't let funpub know about crowd funding special guests. Lol
Tbs

It's a shame I won't be able to make this year but this is good news. Peter was such a pleasure to meet at last years AA.

Another attraction for people going to this is that Thew will be going this year – Admire the Beard!

It's only 35 days till the con and this thread is several pages back? Absurdity.
In any case, is anyone else horribly curious as to what exactly is going to happen at the James Horen cabaret show?

I wouldn't have missed it regardless, very sad.

Especially glad I'll be making it there this year, but what a bummer.

We'll have tickets available for the con but with the Hilton all we can really advise is booking sooner rather than later. For the last few years the hotel has sold out before the con and if anything else is on at the NEC then we'll be competing for rooms. The only positive thing is that we will have the majority use of the Hilton so it's highly unlikely that any other event will take place in the hotel requiring any large number of bedrooms.

I'd like to book my tickets and rooms early next year, I'm just wondering if they would be sold out by then. Is there a time they usually sell out by or anything?

There should be a lot more rooms available in the Hilton for our attendees for 2015 than in previous years and right from the start we are getting more rooms set aside for our initial block. As always this can be extended if needed too.

Also, the Festival Of Quilts isn't taking place at the NEC the same weekend so that will place less of a strain on the hotel bedroom wise although right now we don't know we don't know if anything else is scheduled to take place locally.

Hilton wise, all we can do is just advise everyone to book their rooms as quickly as possible. One thing we do want to stress is that you don't have to pay for your rooms when you book so please don't let this hold up your booking!

Gonna try and make this one, just not sure if I'll be able to get a room in time.