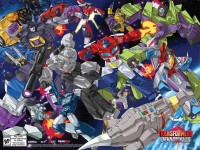 Guido Guidi has shared on his Facebook page a clear version of the Transformers Devastation poster he worked on that was handed out during San Diego Comic Con 2015. The poster depicts a space battle scene that is very reminiscent of toy packaging art from G1 featuring most of the characters we have seen in game trailers and demos so far. Interestingly, we also see Menasor in his Combiner Wars configuration (His left leg is made of new Stunticon Offroad as confirmed by Guido himself here). Will we see Menasor featured in the game? Only time will tell. Until then, check out that clear image after the break.

I need this very much.

I can see where the "It's a Generations game" comes from.

Megatron turns into a tank, with similar forearms and tread placement to his Generations figure. Not to mention Menasor having Offroad and presumably Blackjack (his character model is technically in the game as one of the generics).

Now I'm also using this as my Facebook cover photo.

For those who want this poster, here's the solution: EBAY! Just got mine in today! Not very big thats for sure

I need this on my wall.

Argh… too small for a desktop wallpaper I might just use this as my desktop too.

Update: spoke to the Producer of the game and asked him, he coyly smiled and said that the poster is not an OFFICIAL confirmation of Menasor.

Also, he said that technically this isn't a G1 game, it's a "Generations" game, which should clear up some of the "Which versions of the characters are they" discussion

Nice poster! I kinda want it framed and hanging in my man cave.

I think the Insecticons are confirmed since we saw some play footage of Kickback getting wailed on while he's in bug/grasshopper mode. Menasor and Soundwave (and his cassette minions) would be awesome.

Wonder if Skywarp will show up, and if each named character will be sporting abilities that they displayed in the show/comics (like Skywarp's teleportation and Thundercracker's sonic booms).

It definitely has the big block knee with wheels on the side. Either way, his legs sure aren't G1. Which seems odd to me, the game was described as taking place in the cartoon continuity, and the only other design change I can think of is Bumblebee's back.

Sideswipe is based on his generations counterpart. Megatron is based off the cw leader toy as they confirmed he was a tank, the tops of his shoulder match the toy and he has treads on his legs. It seems Menasor is also based on his cw counterpart. They said the story takes place before the 86 movie so its in the g1 continuity, but it seems like generations in a few cases designs were updated which is fine by me.

Some of these seem to be based on a mix between the G1 animation model and a few small elements from the newer toys. e.g. Menasor's chest has the gold windows and purple stripe bits on one side like Blackjack. It wouldn't surprise me if Megatron is a tank. It seems to be the go-to alt mode for G1 Megatron when a gun is unfeasible anyway.

Yep he was a confirmed tank. Looking at the tops of the shoulder it is indeed based on the cw toy as the shape is identicle

Wheeljack, sideswipe, bumblebee, optimus and grimlock are the 5 playable characters.

I don't have much doubt this is how Menasor looks in the game. You can see in the trailer that Megatron has his CW body and Blitzwing his Generations. I imagine the game will use modern toys in Sunbow cartoon aesthetics.

They should have just called the game Transformers 1986 and crammed the entire cast from Transformers the movie into it.

Now THAT would have been one hell of a ride. especially done up in this style.