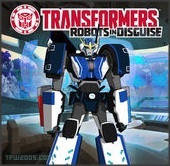 We’re bringing you more coverage from the San Diego Comic Con 2015 with coverage of Hasbro’s Robots in Disguise Panel! Periodically reload this post for the latest updates after the break.

The panel kicks off with the usual introductions.

A video preview showcasing some of what is coming up later in the season is currently playing.

Currently talking about the background of the show, nothing we’ve not heard previously – the whole lighter direction like Generation 1 etc. They also wanted to take advantage of new 3D style CGI

Voice cast are joking around on a tangent. Real sense of camaraderie among the crew.

Constance Zimmer is talking about how this was her first involvement in Transformers, and her first voice role.

They’re off on a tangent again. It’s a pretty chaotic panel.

Grimlock’s voice is a product of the actors playing off each other and ad-libbing.

Cast considers themselves blessed to have fantastic writing.

Constance is apparently quite animated in recording sessions – swings her arms and gestures a lot. Has apparently hit people by accident before.

More Dinobots and female characters are in the show’s future. At least one Dinobot to come.

Someone requested the voice actors do a drive-thru skit.

No word on if we’ll see Megatron or Starscream in this series.

An older version of Jack (and other humans) from Transformers Prime was originally planned to be in the series, but a decision was taken to leave him out. That said, we might see some familiar faces sooner or later. No word on whom.

No word on if Season 2 is happening, yet.

Closing up the panel by showing a clip of Megatronus in action from the finale.

The only thing that ties RID to Prime are:

Optimus being dead.
Bumblebee
Cybertron being a functional planet.

The only thing that ties RID to Prime are:

Optimus being dead.
Bumblebee
Cybertron being a functional planet.

I'm honestly disappointed and saddened by the fact they're leaving out Jack and the other humans. I mean, they're part of the continuity, you can't just pretend they don't exist.

I hope at least there's some lines or something acknowledging that yes, they were a thing. Otherwise it's AoE all over again.

It'll probably get bumped up for season 2 like Sonic Boom did.

It's number 3 on Cartoon Network. The ratings are pretty high.
I don't get how everyone is so negative of the series.

"One of the most top-rated shows on Cartoon Network."

Well that's clearly a blatant lie. If it's so good, why is it airing in the 6am time slot of death?

It's number 3 on Cartoon Network. The ratings are pretty high.
I don't get how everyone is so negative of the series.

"One of the most top-rated shows on Cartoon Network."

Well that's clearly a blatant lie. If it's so good, why is it airing in the 6am time slot of death?

Pretty low on news there. I haven't had the chance to see any episode past 5 so I can't really comment on the story. So far the only thing that interests me are the warrior class toys but with no toys mentioned …… meh.

I hope we get a release date on season two and I wonder what familiar faces we're gonna see… hmm… I hope we see Ratchet. He's too awesome! lol

Series 2 is in production already. Maybe its not getting aired…. Who knows. Dun dun dun.

No new toys, no season 2… that series is a flop?

Even thought I saw the entire first season, I want to see the promo, just to see how they were putting the hype on for people who have only seen up to episode 15

Hardly any news. Bummer. Not even a confirmation on season 2. You'd think with it being "one of the top rated shows on Cartoon Network," it'd be a no-brainer to do a second season. Perhaps it's already in production, but they won't tell us.

remember when rhinox and swerve were revealed?

Maybe we will see more Transformers things tomorrow, Saturday or Sunday. I really do not know the schedule of the convention, but I sure hope we do!

I want Jack and other humans from Prime to return in RiD Season 2. Also I want Arcee, Bulkhead, Ultra Magnus, Knock Out, Starscream and Megatron (an actual Megatron from Predacon's Rising) pls

I remember the times when I was constantly refreshing the panels and reading all the lines for new toys, especially during the RotF/RtS eras.

For me personally, the last big "WOW" reveal from a convention was the Leader class IDW Magnus. I guess wait for more disappointment at NYCC too?