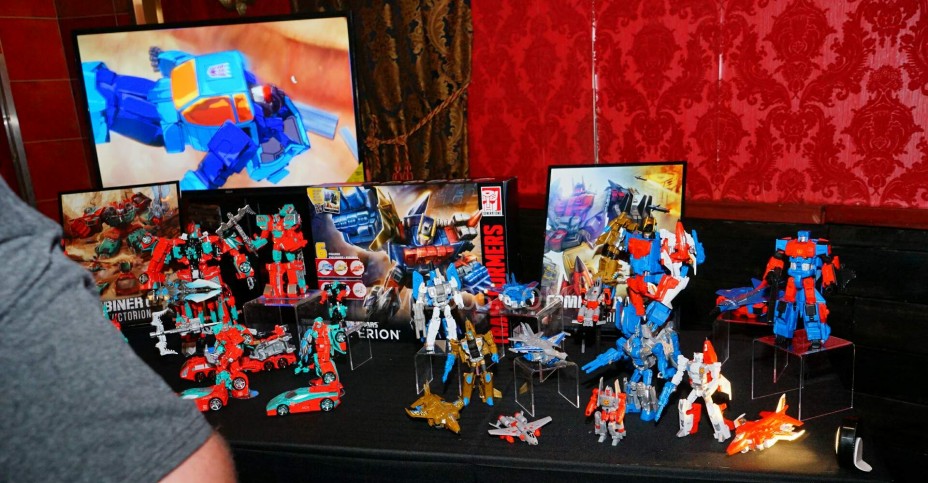 Thanks to our TFW2005 coverage team at SDCC 2015 and the Hasbro Breakfast Preview, we have our very first look at the fan voted combiner Victorion and a Generation 2 version of Superion!

For the Victorion set, be sure to take notice in the images mirrored of the retooling on the molds including: new hands, feet, heads, and accessories throughout all molds.

Also, thanks once again to our at-show team we have some more tidbits to share with you:

– Both combiners will be a box set, not exclusive to any store, mostly through online outlets.

– The Victorian weapons are from the Cosmic Rust episode in Generation 1 and combine.

– The molds being used for Victorion are:

The G2 Superion set will include all five original team members plus Powerglide! Also interesting to note, we learned from Hasbro that they actually bought an original G2 Superion to color match for this Generations release. We can also expect more news about more possible G2 combiners this weekend.

The molds being used for Superion should be no surprise:

Getting Victorian but i figured she would be remolded/retoolled

Getting Victorian but i figured she would be remolded/retoolled

Im getting Victorion. Though must say the colors i fear. Like Nuclear disaster Fukushima fear.
I also think a lot of this will be molded colors. Seeing these standing they are prototypes. And exactly that, repainted. You can see some of the paint being rubbed off on parts that were transformed. So I expect some level of difference with the final product. Also a lot better paint job then is done by the interns on these.

Don Knotts is that you?

The colors are feminine and I like that they are unified. I like the feminie heads and new weapons. The only thing I do not like are having 2 helicopters. They should have made a jet instead.
I would like this to be sold as a gift set exclusive, because else it will warms the shelves for a long time. That is the reality of less popular characters.

I'm curious about the new G2 Superion, the original was my first combiner, but I'll pass on the others.

I am seriously thinking of getting just Pyra and then using whatever the hell limbs I want to make her. Maybe do Rook, Alpha Bravo (if I can find a the final Aerial Bot), and maybe Ironhide and Ratchet? Make it a fun mashup of bots rather than that… mess.

Did you sign a contract somewhere I don't know about that requires you to purchase this? Last I checked just because it was a fan vote, doesn't mean all fans have to buy it.

You people are such drama queens, it's insane.

Wait, it WASN'T required that I buy the lifetime purchase plan for transformers? DAMMIT!

Ankle tilts are fine and all, but can we get a few more ratchet detents in the hips? Otherwise, she'll be standing upright on my shelf, just like all of my other CW figures – rendering the ankle tilt moot.

Can't say I like the redeco's molds for Victorion, much less the crazy colors. What I do like about it are the new head sculpts, the new combiner feet, and the very cool weapons combining into that giant gestalt sword.

After years of watching people rip their hair out over lack of paint, smaller toys, gimmick lines, etc. and just sitting back and enjoying what turned out great, I can honestly say I've officially lost faith in Hasbro. It's like they designed Combiner Wars to look fantastic only to crush everyone's hopes. The way everything's going it really feels like Hasbro's standards have dropped massively as of this year, way more than when DOTM came out with less paint and smaller toys.

I can't even get into Victorion. Normally I'd be all over it but there's just so much they could have done to differentiate it from the retools. Betatron is just a spit in the face. I never had any attachment to the Combiners besides Bruticus, but Superion and Menasor and Defensor really got me into them. If they put work into Computron it could easily have been one of my favorites, just going off of how the colors look on Betatron here.

There is no G1 Victorion. She is a fan-built combiner, after all.

And here we see the splendid Joke fly gracefully over someones unsuspecting head.

G2 Superion: no thank you!

Victorion: interesting color choices–wish it was toned down since these 'bots are from the Sea of Rust, like the idea of the opposite twins, amazing weapons

New hands and feet with ankle tilts definite improvement but the feet are still too small width-wise.

That's not how the voting was set up. We voted for each individual limb and two of the winners were the helicopter mold. To Hasbro there's no other way to interpret the results.

as with everyone else I am thumbs up on the retools and the combined weapon.

colors… I don't get it… such large patches of such a loud orangey red and bold light teal… give me something like a deeper red bordering on crimson and either lighten that blue to a sky blue or better yet darken it to a midnight blue… would look more appropriate, I didn't realize that rust was carrot colored. I won't give them the benefit of "it's a hand painted proto", they put a ton of effort into painting details, you're telling me they couldn't have used some neutral tones like white, black, silver or gray to create some better differentiation and detailing? or just break up some of the big chunks? I get the sneaky feeling that this is the planned schemed on the end product.

Double copter arms? I can deal with it. Double rotor shoulders makes me think dairugger which is fine by me. the twin thing? lazy lazy excuse to use less effort in differentiating the two. you wanna do twins? give me to very similar looking bots with different alt modes, you know what I'm talking about fandom.

also thinking they went lazy on the fire engine alt mode, why not adapt the onslaught retool? that thing was damn sweet looking. instead we get a fire engine with stylized minecraft pick axe sticking off the ladder… what? do we worry about things burning in the sea? are rusty things flammable? again, coulda used the onslaught retool and the axey looking thing begs on top of the cannons as some sort of giant spread shot energy ballista.

ok I give up, gonna try to just swallow my irritation except for one last comment…

does anyone else think that orange chin piece makes Victorion look like she has a goattee? I can dig it cuz a super neon bearded robot lady definitely belongs in the transformers freakshow.

Glad so many people hate Victorion.

That'll make her that much easier to get

Seems about right, assuming they don't decide to knock it up because of the weapons and rarity. Four 15$ deluxes, one 25$ voyager, and one 10$ scout. Well guess I'll ask for Amazon gift cards for my birthday or Christmas.

My only complaint about Victorian is the fact that we have two Copter characters. Why couldn't they have gone with one of the jets as another limb? Or at least altered the pattern of one of them more than just mirroring it.

I really want to know why Hasbro picked those colors though, and that bright. Remember next time vote Black and White. Harder to mess that colorscheme up. Then again when do the versions we get actually have the paintjob from the versions we see at the conventions?

Just noticed. Pyra Magna has a face design molded on her chest. Well maybe not intentionally, but when the light hits in right from the right angle it looks like eyes, mouth and nose.