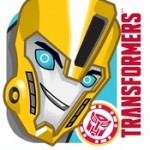 Transformers: Robots In Disguise Mobile Game is now released for iOS and Android. Depending on your region, it might take a while for the game to be available on your regional App Store.

The game is an Action Adventure Beat ’em up, judging by the gameplay. You can check out the detailed description of the game and Download Links, after the jump.

The game features new characters for the show including both the Autobots and the Decepticons.

Touch Games You Tube channel has uploaded a Gameplay Trailer for the Transformers: Robots In Disguise Mobile Game as well. Check it out below:

DOWNLOAD NOW!! THE TRANSFORMERS NEED YOUR HELP! The Insecticons are everywhere and we need your help to defeat them! Take control of your favourite Transformers, collect energon, and unlock power modules to gear up and defeat the Insecticons.

▶TAG TEAM GAMEPLAY:Bumblebee can’t take them all on by himself. Select a teammate to take into battle with you. When Bee gets tired his parner can take over and finish what he started.
Discover lots and lots of new Autobots and Decepticons characters to unlock along the way from
▶CUSTOMIZE your character with new weapons and boosts by collecting Power Modules throughout the game.
▶TRANFORM into Vehicle Mode, rev your engines and smash into your enemies, knocking them out of action!

COMING SOON
During 2015 you’ll be able to unlock your new Transformers “Robots in Disguise” Toys in the game by scanning the new Transformers “Shield” icon. (See game for more instructions). All unlocks are available through play, no purchase necessary to enjoy the game.

INFO FOR PARENTS
Other than for downloading and updating the game, Transformers Robots in Disguise game does not require an internet connection (3G or WiFi) and rest easy, it has NO in app purchases.

Is anyone else having trouble finding the update on iOS devices? It is definitely on android devices already but I play on an iPad. Hasbro and Apple were not helpful. Has anyone heard anything about this?

My phone checks for updates when it's connected to Wi-Fi and has downloaded about 4 updates in the last few days.

Now when it starts up, it connects to Hasbro in some way to make sure it's got the latest version. Also it appears that characters scanned now stay unlocked for 48 hours.

And meanwhile, mine still hasn't. I don't even see anywhere that I could check to manually update it.

I checked, but I don't see the update anywhere.

I checked, but I don't see the update anywhere.

Just started playing it. It's simple, but it's already better than most TF games out there.

Nope Fallout and I have that circle too.

Sorry to double post, so to say, but question: I've got 318 stars, and I've beaten level 110, but I have a ! circle under the refinery, but I don't seem to have any new areas or missions in either the refinery or the train yard under it.

Is there something wrong or is that all there is? I know I'm missing a fair amount of stars, but I just wanted to make a quick check and see that there isn't some fatal flaw with my copy of the game.

I've had a few crashes, but still, it's a neat game; it's also the only one on my phone that I've deliberately downloaded and played.

Finally downloaded this game today. Scanned my toys after I finished the intro bits, then scanned some other figures from YouTube reviews, but seeing the "cheet sheet" here is a nice bonus.

It's not a bad game for free and no "freemium" purchases makes it a neat little Transformer game.

^ Kite the Cons around and just shoot them, making sure to take 3-4 hits per Con with weak shots (meaning shoot as soon as the blue crosshairs appear). I recommend Fixit for that level since Fixit is the best for kiting.

Later on, for levels that seem to have impossible point requirements, do the same thing. On longer levels you can get combos of 40+, and start breaking 20k-30k points.

Thank you very much. It worked.

From using the toy scans: 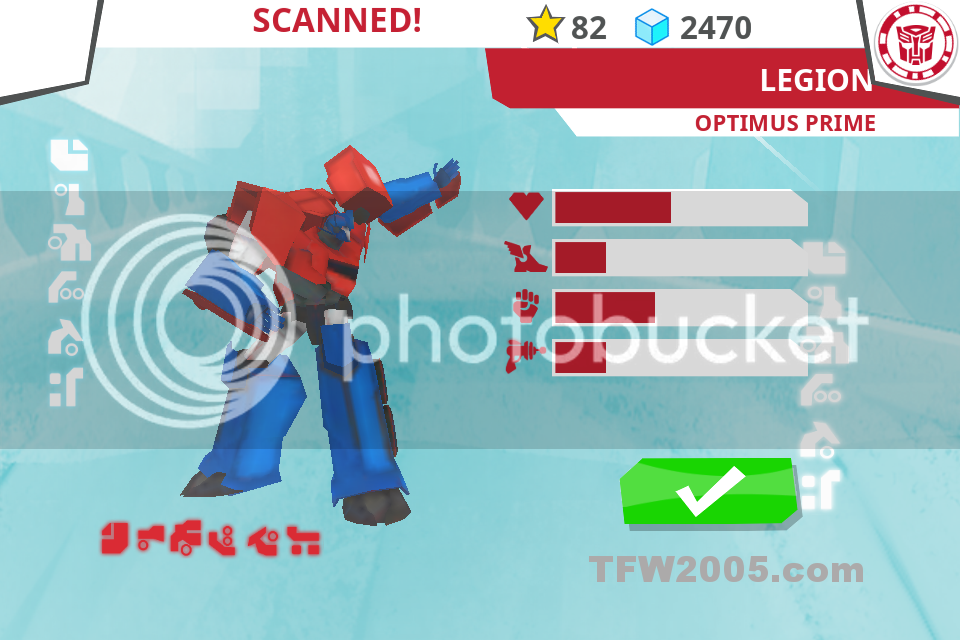 ^ Kite the Cons around and just shoot them, making sure to take 3-4 hits per Con with weak shots (meaning shoot as soon as the blue crosshairs appear). I recommend Fixit for that level since Fixit is the best for kiting.

Later on, for levels that seem to have impossible point requirements, do the same thing. On longer levels you can get combos of 40+, and start breaking 20k-30k points.

Does anyone know how to get 2000 score star for Scrapyard level 5? The maximum I got was 750. And that was from a very lucky combo.

I've been unlocking using the figures. One step underbite is really strong and like a big deception puppy.

Just tried it and I really like it- Thunderhoof looks so good with his antlers!

I passed this info along to my nephew, hope he enjoys the game too.

Moving to TFP/RID forum and will be merged with thread there.