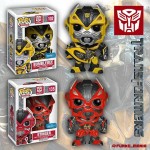 Via the Funko Pop Mania Facebook page, we can bring you word of the latest Pop Vinyl Transformers releases planned by Funko. Next up are a pair of Walmart exclusives based on Transformers Age of Extinction – there’s a Bumblebee vinyl, and a red version of Bumblebee to represent his evil twin, Stinger. Bizarrely, Stinger uses the non-battlemasked head, rather than the one with the battlemask he used throughout his scenes in Age of Extinction. This is probably because he’s just a straight repaint of Bumblebee, but it still looks odd. Check out the image and see for yourself. 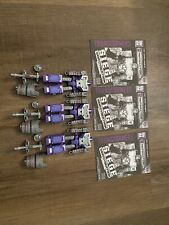 Transformers War For Cybertron Lot Of 3 Refraktors
$65.00
Buy It Now 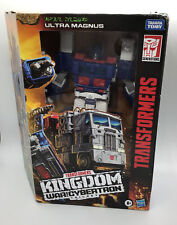 They have them up on Walmart's site here Funko Transformers Pop! Vinyl Set, Drift, Optimus Prime, Stinger and Bumblebee with Weapon: Action Figures : Walmart.com. You have to buy the set to get the two for 38.99.

It's sad that the only Stinger figure that will go with my Lockdown and Galvatron figures is a Funko Pop figure.

So much TF movie merchandise is half-arsed

why is there no Deluxe Stinger?

Funko can give us a potted Baby Groot, but they can't atleast paint Stinger's eyes green?

Sadness. Guess we'll just have to do it ourselves.

At this point I'd take a straight up red bumblebee with painted in eyes on the battle mask, just give us a proper deluxe stinger already!!!

I saw a Halloween costume just a lot like this. On the outside it w as Bumblebee, but if you inverted it, you get Stinger and he had unmasked mask as well. Although that was a separate piece and not a mask you invert.

well this is closest to a stinger toy we're ever gonna get……and it still sucks….

You guys remember back in the day? Like when Rotf was making a booming toyuline? Hasbro has literally been a big letdown since then. How hard is it to make a decent Stinger toy. They're just really getting lazy these days.

Wow stinger keeps getting shafted. And if there was at least a con symbol and green eyes it would be fine.

Wow they really have dropped the ball with Stinger in just about every way possible.

They couldn't find a rats arse to give Stinger HIS head.

Excuse me while I jump a cliff 'cause that's Cliff.

Even just changing the eye color to green might have made a decent difference.

Couldn't even spring for a new head.

They couldn't have just made a battle mask head? That way you could still have both toys be identical aside from color change and they'd be movie-accurate.

They couldn't have just made a battle mask head? That way you could still have both toys be identical aside from color change and they'd be movie-accurate.