Next up in our new Transformers toy galleries, we’ve got a look at Generations Deluxe Tankor to share with you. “Fat Tankor” as he is known (though not to his face) is a part of the upcoming Generations 2014 Deluxe Wave 3 along with Rattrap, an assortment which celebrates the Beast era of Transformers.

Tankor is a homage to the Beast Machines Vehicon general Tankor, whose initial Mega class toy in 1999 was extremely cool but very inaccurate to the show model. This version of Tankor is much closer to how Tankor looked on the show, with the possible exception of his short legs. Tankor’s transformation is very simple, yet works extremely well and has no excess vehicle parts hanging off the robot mode, which is a rarity among Transformers toys. Tankor is also very nicely poseable. His transformation rules out waist rotation, but almost everything else you could ask from a Deluxe class toy is there and is unimpeded giving a great range of motion. The articulated claw hands are a nice touch and let Tankor get a grasp on extra weapons, other Transformers… it’s a really cool touch. The tank cannon is attached with a c-clip, but does not have to come off to transform. The only thing that would have been nice with it would have been if it could have rotated to aim at targets around the tank mode, rather than being fixed straight forwards.

Overall, Generations Tankor is a very cool representation of the Beast Machines character. He’s a toy who is squat but powerful looking, and a lot of fun to play about with, pose and transform. He’s not yet arrived at US retail, but while you wait, please check out our gallery to see what you think of this release: 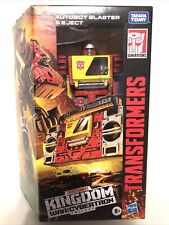 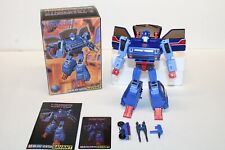 The most flattering pic I've seen of Tankor. Too bad there aren't any Cyberverse Beast Era figs…

Very cool. I'll definitely get this. Would love to see an updated Nightscream or finally a Botanica figure get released.

Lovely pictures, but you've mis-transformed his legs. Tankor is supposed to have digitigrade legs, which his joints actually do allow.

As for the figure, I own him and I love him. Either then size, he really is the perfect figure and a very worthy addition to a line dedicated to celebrating all 30 Years of Transformers. He's simple because Tankor is supposed to be simple and the size is a result of him being a Deluxe. I can imagine if he was a Voyager we'd have an equal amount of whining about him being "too simple for the Voyager class".

Looks really good, I hope they make the other Vehicon generals too (or at least Jetstorm and Thrust, they were my favorites). I'd normally prefer Jetstorm and Strika to be Voyager, but since they've already made Tankor pretty small, they should all be Deluxe so Tankor's not dwarfed even more.

On it's own, not bad. Scale is the killer. If all the other BM characters were legends class I'd really dig this. How cool would a legends Jetstorm be with a tiny Cheetor? Got my fingers crossed for an upscale from hasbro or a KO company.

My initial thoughts are reinforced: Tankor looks fantastic. I'm so very glad he turned out well.

Just not feeling this one. The size already kills it, the tank mode looks horrible (the tank drone looks so much better next to it as does the innacurate original), and while it might be accurate the stubby legs are somewhat awkward as well. I might pick it up but it's not one I'll watch out for.

I've been passing on the Beast Wars figures…but this Beast Machines guy might have a place on my shelf…or at least in a plastic storage bin in my basement.

He'll make a great drill sergeant to whip my Prime Vehicons into shape at some point, though.

He's a tiny little beefcake, but I'm digging him a heck of a lot more than I did previously. Now that reviews and in hand pics are out the only thing bugging me now is that plastic color used for the head with that splash of silver for his faceplate/mouthpiece. I keep thinking his head will glow in the dark but it doesn't.

:sigh: Another one to toss onto the list of figures to get.

I dont normally complain about the size of figures but this time I got to say, What the hell? Why is a deluxe just about the size of a Beast Wars era basic? I was gonna buy it but at that size I have no interest in it, it's too small for the price. If i can get cheap maybe but I aint even paying retail for that.

Ah, screw it who am i kidding i'm buying that damn thing I'm an addict for Beast Era.

Wait. Who is the black and red one? I haven't seen him yet, and he looks like his design was based off of those scrap bug things from transformers cybertron.

I use to have Mega-class Tankor. It looks completely different from the animation model, but I wish the character had been based off that toy.

Looks great to me will pick him up at retail if I see him hopefully the $9 at WM.

I don't understand the hatred for this guy, the original design was a simple blocky robot with claws that's what we have here.

It's alright, I would have preferred it being a Voyager class so it would look better with the BM Jetstorm and Motorcycle Drone (Thrust).