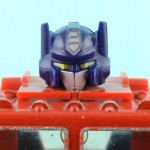 Welcome to TFW’s Transformers at 30 retrospective! Over the next 30 days we will be counting down to the anniversary of the franchise we all know and love with a year-by-year walk down memory lane, remembering the highs and the lows, the cartoons, the comics and the toys which have contributed to the franchise and shaped what we know as Transformers today. Let’s dive right in with the year that started it all – 1984. While 1984 was the debut year of Transformers, the story truly began much earlier, in Japan with the toymaker Takara. Takara in 1980 had introduced the Diaclone line. The line at its earliest stages used science-fiction styled vehicles and robots, all of which could transform into alternate forms. The line featured small pilot figures that controlled these robots to fight against alien invaders. In March 1982, the line introduced a new concept, “car robots”, which featured realistic vehicles turning into robots. The very first one was a Countach LP500S, which would become the Autobot Sunstreaker. In 1983, Takara introduced a new theme into one of their other lines, Microman, called Micro Change. The Microman series was all about how these 3 ¾ inch figures were 1-1 scale with the characters they represented, and the Micro Change series sought to extend this by having transforming robots based on items such as a minicassette player, Choro-Q toys, and several guns. These lines would remain in Japan initially, outside of Takara’s attempts at marketing the toys outside the US under the banner of Kronoform and Diakron.

A selection of Diaclone car robots, who would later become mainstays of the 1984 Transformers toy line[/size]

In 1983, representatives of Hasbro attended the Tokyo Toy Show, looking for prospective new properties to license for the US market. Hasbro’s representatives reported about these cool robots that turned into everyday objects and real cars. Accounts differ but it is generally accepted that it was then-Hasbro employee Henry Orenstein who introduced the toys to Hasbro CEO Stephen Hassenfeld and Vice President of R&D George Dunsay. Hasbro commissioned advertising agency Griffin Bacal to come up with a way to adapt the two lines for the US market. Griffin Bacal put forward that the robots should be the main characters of the story, rather than the piloted mecha of the Japanese lines. They split the toys into two factions, which they named Autobots and Decepticons, and designed the faction logos based on the faces of the toys that would become Prowl and Soundwave. Jay Bacal, son of the company’s founder Joe Bacal, is responsible for giving the toyline its name – The Transformers. The deal with Takara was formalized on November 1st, 1983.

Hasbro and Griffin Bacal approached Marvel Comics to create the backstory and the personalities of the characters for the new toyline, and this was utterly crucial, because it is the personalities of the Transformers which arguably gave the line its enduring appeal. The initial work at Marvel was carried out by editors Denny O’Neil and Jim Shooter. Denny O’Neil was responsible for naming the leading man of the franchise – he came up with the name Optimus Prime. However, Hasbro would reject a lot of this early work, leading to Jim Shooter to ask Bob Budiansky to carry out the revisions of the characters and their bios – all with a week’s deadline, over Thanksgiving no less. However, Bob Budiansky did an admirable job in this tight situation, and created many of the names and personalities which still endure and entertain 30 years on. Cover artwork to Marvel Comics The Transfomers #1, May 1984[/size]

Marvel’s The Transformers comic debuted on May 8, 1984. Bob Budiansky served as editor for the initial 4-issue limited series, which related the story of how the Autobots and Decepticons, locked in a war that had lasted for thousands of years, crash landed on Earth four million years ago only to awake again in the present day and begin their war anew. This series established and fleshed out the origin story, from which all subsequent versions of Transformers draw their influence – the two factions continuing their war on Earth, the humans caught in the crossfire, the friendship of the Autobot Bumblebee with said humans, and the Decepticons’ unquenchable thirst for conquest and power – it all started here. The series also notably featured guest appearances from the Amazing Spider-Man, who teamed up with Gears to fight the Decepticons, and Nick Fury of S.H.I.E.L.D. The initial four issue miniseries proved unexpectedly popular so the planned ending was altered to conclude on a cliffhanger, with the Decepticon Shockwave arriving to blast all of the Autobots into submission.

On September 17, 1984, The Transformers arrived on TV screens across the US. The cartoon series was produced by Marvel Productions and Sunbow Productions, with Sunbow Productions being owned by Griffin Bacal. The cartoon kicked off with a three episode arc titled “More than Meets the Eye”, which like the Marvel Comics miniseries told the origin story, and chronicled the Decepticons’ quest to gather resources to build a ship to return to the Transformers’ homeworld of Cybertron, with enough energy to allow them to conquer the world. The series then spun out from here, chronicling the ongoing battles between the Autobots and the Decepticons as the Decepticons raced to plunder Earth’s energy and resources. New characters were introduced in the episodes that followed, including the Dinobots, Skyfire and the Insecticons. The characters were brought to life by the excellent work of the show’s voice cast, which included Peter Cullen as Optimus Prime and Ironhide, Frank Welker as Megatron, the late Chris Latta as Starscream, Dan Gilvezan as Bumblebee, Gregg Berger as Grimlock and the late Scatman Crothers as Jazz. The show’s first 16 episode season featured two three episode long stories, the aforementioned More than Meets the Eye and The Ultimate Doom, which saw Megatron moving Cybertron into Earth’s atmosphere and enslaving many humans including the Autobots’ friend Sparkplug Witwicky. The season concluded on December 15, 1984, with the episode Heavy Metal War, which introduced the Constructicons and their powerful combined form, Devastator.

A selection of the Transformers toys released in 1984, including Optimus Prime, Megatron, Jazz, Bumblebee, Soundwave and Starscream

Of course, no retrospective about The Transformers debut year would be complete without talking about the toys. The Transformers toyline debuted to great success, the core of which was the simple two in one nature of the toys. Each Transformer at its core was a toy car, plane or other item, which could also transform into a robotic action figure. The initial 1984 lineup saw 25 releases and 28 characters, including many of the iconic core cast members such as the original Optimus Prime, Megatron, Starscream, Bumblebee, Ratchet, Jazz and Soundwave. While the toys by and large had limited articulation, they also had detailed designs and decos enhanced further by stickers, and the larger toys had lots of accessories.

The 1984 Transformers line had a rival in the form of the Go-Bots which Tonka had licensed from Bandai’s Machine Robo. While Go-Bots beat Transformers to market, arriving five months before the robots in disguise, the Transformers performed much stronger in retail and outsold the Go-Bots 2-1, netting Hasbro $111.6 million in sales in their debut year.

1984 was the year that it all began. Iconic characters, and two major media incarnations of the story set down the firm foundation upon which that which has followed over the last 30 years.

Acknowledgements – this article series was greatly assisted by the comprehensive timeline of events in the early years of the Transformers held on the TFWiki. Additional financial details come via on the former Electric Escape site, which we learned of from BWTF on Facebook.

Thank you for all these links! I definitely needed this in order to make my own list. Glory to transformers!

Awesome, such a dense history!

Thanks. I have been doing that since that post. TF Wiki has been answering a lot of questions.

It took me days to read all of this!
Excellent and informative write up. I'm impressed and it filled in a few blanks for me. I've been collecting since G1 with a few years of breaks until I started a major effort into collecting through the Energon era, the beginning of the Classics line, and intermittently through the years til I saw Titans Return and have been heavily collecting since. This write up has shown me where some of my more eclectic figures have originated.

Is there an update from 2015 to current in the works? I'd love to see what else I've missed.

You can always read some pages over at TFWIKI to catch up on those years, covers pretty much everthing.

It took me days to read all of this!
Excellent and informative write up. I'm impressed and it filled in a few blanks for me. I've been collecting since G1 with a few years of breaks until I started a major effort into collecting through the Energon era, the beginning of the Classics line, and intermittently through the years til I saw Titans Return and have been heavily collecting since. This write up has shown me where some of my more eclectic figures have originated.

Is there an update from 2015 to current in the works? I'd love to see what else I've missed.

I think a good way to think about the immense shift in style and content between TG1 (Transformers Generation 1) and TG2 is to think about how the toys, cartoons, and comics focused more on variability of character significance for various storylines. TG1 offered stories relevant to particular characters, but TG2 offered a more liberal attitude towards who could be a randomized figurehead in a given storyline!

That's why TG2 was the 'gateway' to the modern Transformers era which focuses much more on general concepts and character randomization than did TG1.

That's also why TG1 is the ideal intro for anyone looking to become a Transformers fan. Hey, isn't that why we all love Transformers: The Movie (1986), the real art-piece that began showing us conceptual bridges between TG1 and TG2?

35 years of transformers, and i have only been apart of it for 10 years

I don't care about anything but G1.

That's really too bad. You're missing out on a lot, and I mean a lot of really good Transformers stuff by only caring about G1.

For years I've wanted the G1 series in a blu-ray release. With this year marking its 35th anniversary, hopefully we'll finally get it. I don't care about anything but G1.

Cool. Thanks for all the info.

It took me 7 years to set up my own Transformers 1984 Glass display in my own living because its one of my long-life dreams that I lived.

To quote Ultra Magnus,
"I've never seen anything this beautiful in the entire galaxy. All right, give me the bomb."
It is indeed a treat to behold. To another thirty. [proceeds to scour kitchen for that cup of water he knew that he had poured]