The Spacebridge has shared a look at some more truly rare unreleased Transformers memorabilia on Facebook. This time out he has given us a rare glimpse at metallic chrome versions of four different takes on the Generation 1 Seeker mold. These Seekers, which were never released, were produced by Takara for Hasbro to use as competition prizes. It is hard to pin down the exact time period these date from, but they must be post 2003 due to the Starscream using the Transformers Collection series tooling which included the additional Megatron gun accessory.

Not a bootleg, fake or “lunchtime special” These toys were made as samples by Takara for Hasbro. They would then be offered as exclusives or prizes to retailers if they wanted to run a promotion. So if Wal*Mart wanted to run a Transformers competition these would be offered to them by Hasbro as a possible prize. Most likely not used as Japanese size missiles so “unsafe” in the United States. These are original Hasbro internal pictures.

Check out The Spacebridge’s Facebook page for more looks at weird and wonderful unreleased Transformers items! 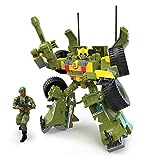 Before you claim someone is spewing shit, maybe you sould talk to them and get the FULL story first. I used the wrong wording for my chrome Op and TC, so shoot me. As for the Prime, the box is a legit G1 American box THAT I BOUGHT NEW in the store when I was a kid! I put him in there to keep the dust off him. I also put TC In the comm box. I Am a serious collector and have been around. I also have over 23 clear lunchtimes that I started collecting back in 2003. Before you try to slander someone, you better have your facts straight pal. You did not call anyone out.

Not meaning to bring up this old thread but, were there ever any KO's of the various chrome colored seekers made?

Somebody on facebook is trying to pawn off a blue chromed g1 Commemorative Thundercracker as a "lunchtime special" I called him on his shit. but I want to be able to back up what I know, and that's that there is no such thing as a lunchtime-special of that thundercracker.

He also has a Silver Chromed G1 Optimus Prime in what looks like a reproduction of the original box, that he is also claiming to be a Lunch-Time special. except here's the thing: There is no trailer Decal on the trailer. which if it were official, it would still have.

Except you have your made for you. They are not the same ones as the ones in the pics.

They look pretty great to me!

Do you know how many official ones exist of each color?

Bombatron, is that your creation?

I know someone that has a colored chromed MP SS, absolutely gorgeous!

Yes, it was a commission that I did a few months ago.

Do you know how many official ones exist of each color?

Bombatron, is that your creation?

I know someone that has a colored chromed MP SS, absolutely gorgeous!

The silver Soundwaves I've seen were all KO's.

Just FYI the Thundercracker I own is the exact one from Rik's panel. Most, if not all of the ones in the panel came from a single collector

Does anyone know about a chromed silver g1 soundwave? Is that also "lunchtime" or possibly line one of these hasbro specials? Or is a custom ko? Wow, very cool seekers! Wish Takara or e-hobby would do a limited release (along with the crazy colored Hasbro G1 re-issue Megatron that never made it due to safety hazards).

I can't provide any evidence

Shut up and take my money!

Looks fake to me. I don't buy the story. I heard the same story a few times. Looks beautiful though.

how can one be certain they are not KO? what makes them legit?

I can't provide any evidence as I got them directly from a (now former) Hasbro staff member, what evidence could I get anyway?

If you look around my page you will see plenty of other pictures that are fairly unique & from Hasbro.

why were these not at retail? i would have to buy 3 of each

Those are gorgeous. Now that these are made public, hopefully Ehobby will take the initiative…..