USA Today has lifted the lid on the San Diego Comic Con 2013 exclusives from Hasbro. Continuing the trend of the past few years, Hasbro will be offering a G.I. Joe and Transformers crossover set again this year. This year’s set features the G.I. Joe Skystriker and V.A.M.P. vehicles redecoed as Jetfire and Autobot Hound. The set includes three G.I. Joe figures, Snake Eyes sporting an Autobot symbol, the Baroness with Ravage on a chain leash, and the third figure in the set is a G.I. Joe samurai figure redecoed as Bludgeon himself! The set is rounded out with accessories of Blaster and his cassettes in their alternate modes.

Other Hasbro San Diego Comic Con exclusives are shown, including Star Wars exclusives, but these are the only Transformers / G.I. Joe ones on display. 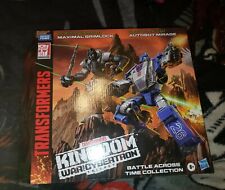 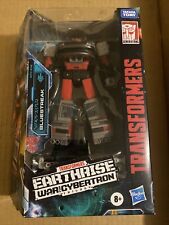 I only collect transformers and not GI Joes, but I love the crossovers we have gotten. I like how they are pacing them out. If this is the last one I am ok with that because, if there were more I'd keep buying them lol

I'm ok with them not transforming because their vehicle modes look so cool.

I dont see the appeal for these crossovers. They dont transform so I cant display them with my TFs. And they look like the Joes went cosplaying,so I cant put them with my Joes!

That just means they aren't your thing. Which is fine. The thing to realize is that there are a lot of fans from the 80s who grew up with both, and grew up with them crossing over in both the comics and cartoons and who like the two being connected in one universe and story. Not everyone has the same mental categories as you for what a toy has to do to fit with their collection.

– ZacWilliam, also "the Joes look like they are cosplaying" is something you could say about Joe and Cobra members every single day. They've always worn the goofy and flamboyant, these are FAR from the top of the pile on that list…

I dont see the appeal for these crossovers. They dont transform so I cant display them with my TFs. And they look like the Joes went cosplaying,so I cant put them with my Joes!

So there is gunna be a solo TF exclusive right? When do you think they'll reveal that?

Since this set is so big I'm starting to doubt there are going to be solo exclusives for Transformers and Gi Joe.

I need that Ravage.

Because he was a seeker in G1…

So there is gunna be a solo TF exclusive right? When do you think they'll reveal that?

I'd buy both of those, especially Beachcomber. They could pair him up with Footloose (yeah, I know he was a GIJCC exclusive, but they could just change the deco some).

I was VERY excited for this set, especially Jetfire…until I put them next to each other…I had forgotten how massive and bada$$ G1 Jetfires boosters were/are…now I'm less excited…hope I don't "shatter the glass" for the rest of you who may've forgotten…

I realized immediately the boosters were much smaller (relatively) than those on the G1 version. I'm OK with this though as boosters to match would look ridiculously oversized at that scale.

I completely agree! Although I think there aren't as many iconic Joe vehicle color schemes. A lot of them are just green or black, and their iconic look comes more from their shape and design. The Rattler is definitely a notable exception, and I would love an official Hasbro Powerglide repaint in Rattler colors (I passed on that KO Jizaitoys version, but might still seek it out someday). I guess you could do a grey Jetfire, a black or blue tankbot as a HISS, or release Wreck-Gar in green as a RAM or something. Eh, actually, yeah, there are things that could work. Certainly enough fodder for a dozen figures or so.

Yea, some of the color schemes may not be all that dynamic, but decking them out with all the GI Joe and Cobra logos and sticker (hopefully tampos) would make them look pretty sick nonetheless. Some may be a stretch, but it has been a little bit of a stretch going the opposite direction, and they have turned out pretty well.

Really wish I had the space for these, I could have gotten the HISS last year, but would have had to track down the Starscream. If I happen to be online when these are available, it would probably be tough for me to pass on them.

I can't imagine because the huge demand will be there if Jetfire can transform.

could you imagine the demand for these if they actually transformed??

They really should do a bigger boosters for the Jetfire.

The Devil's Due crossovers were very good. Prime makes a great Crimson HISStank and Bludgeon and Monstructor make for a great Cobra-La teamup.

My favorite had to be Flint and Cosmos fighting the Battle Beasts that served as Unicron's immune system. Wild.

The main medium has been the comics, there was the original 4 issue mini-series in the 80's, then at least 2 or 3 more crossovers in recent years. Some of the stories have been very good.

Those are the main crossovers that I can think of.

Yep. Last year was rough with the properly colored Bruticus.

Shut up and take my money!

how do the exclusives get put up on HTS. post convention? which date?

And that is the $25,000 question. Stuff goes up whenever. So it's basically sit in front of your computer for days on end F5ing until stuff goes up on the website. And then punching nearby objects in rage when the site times out or items in your cart go out of stock while you're trying to check out. Fun times, fun times.

how do the exclusives get put up on HTS. post convention? which date?