Beast Hunters Shockwave is, put simply, an excellent toy. He’s not perfect, but he is big and bulky. He feels huge and imposing as Shockwave – in particular Prime Shockwave – is often made up to be. Not only is he big and bulky, but he is also extremely accurate to his look on the show, right down to hose on the cannon, which is implemented in a very cool way. While the tank mode feels a bit like an afterthought, it is accurate to the one you see driving up to Knock Out in Scattered.

Gimmicks include a spinning cannon on Shockwave’s gun arm – the button of which is a little intrusive but not overly so and it is more imaginative than a shooting missile at least – and removable, optional Beast Armor. The armor is a fun extra, but you don’t have to attach it, and for the most part I’ve been keeping it to one side.

All in all, Shockwave is a very well-recommended toy. He is big, imposing and looks just like he does in the show – and for this fan, that is all I could want from a toy of Shockwave.

Open the link below to check out the gallery: 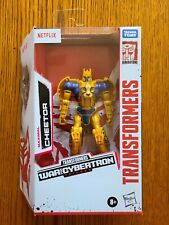 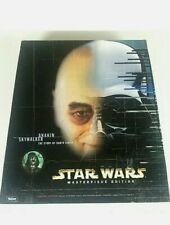 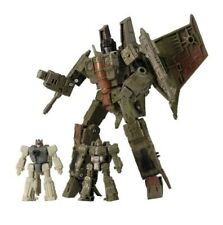 Can't wait to display him with Henkei Megatron and the CHUG Decepticon team.

Looks good, but i'm gonna wait for the Takara version

I'm kinda disappointed by the hose. Don't get me wrong, the gimmick is damn awesome, but I wish it was heavier and floppier because if I leave it in his gun, I worry it'll get into a really strange shape.

The weight might have been an issue for the arm staying upright though – if it were heavier the "arm out in front" stuff wouldn't take as well.

Valid concern though, I tucked the hose away back in its tread when I put him up on my display. I figure Shocky will be toward the back because of his size so I won't see it, and that way it saves the tread.

Damn I need this figure so bad.

I'm kinda disappointed by the hose. Don't get me wrong, the gimmick is damn awesome, but I wish it was heavier and floppier because if I leave it in his gun, I worry it'll get into a really strange shape.

Plug the "chain" into the rectangle hole in the back of his cannon.

Yes, it plugs right in there without too much force, but stays in nicely once it is in there. Great part about that is it is one of the rear treads – when you transform it the tread unfurls and becomes the hose. Simple, but oh-so devilishly effective.

I'm not a fan of the Beast Hunters toys, but I will get Shockwave.

This is probably my favourite looking Beast Hunters toy

Plug the "chain" into the rectangle hole in the back of his cannon.

I like this figure from the knees up. But those shins and feet…. man. The feet look like a ballerina extending her toe and the shins are stylized V shapes pointing down to them.

IMO FOC Shockwave is better but this figure would be great after a shin and foot swap/ mod.

This might be my most favorite non G1 rendition of Shockwave. I love this design. Don't care much for the add-on parts though

This and smokescreen and thundertron are the only prime figs i am after. this is EASILY the best version of shockwave!!!

Looks better than the FOC Shockwave

Thanks for that. He's a great rendition for sure…

All this…^ SHOCKWAAAAVE!!! cant wait to get mah hands on this one!

Nice toy, but am I the only one who hates his feet? Show accurate or not, they look ugly

I thought that the first time I saw this figure.

Quick phone picture but hopefully this will do the job:

Thanks for that. He's a great rendition for sure…

…but still so rounded compared to most of the CHUG figures.

Same way I think the Prime Wheeljack was much better than the CHUG one, but just didn't fit in with all the others…

Yep, I had him for 2 days before knowing they pulled out!

Great gallery Sol… but it looks as though you don't have his alt. mode rear treads spread apart fully. They pull outward to the sides to expand the weight-bearing base of the rear of the tank. IIRC, it was a step they missed in the instructions.

Yeah I followed the instructions so I missed that. Thanks for the catch, I'll update those when I get a chance after I finish MP13 and MP16