Hello and welcome to another TFW2005 event coverage! You are joining with us on our coverage Of Hasbro New York Toy Fair 2013 Investor Event.

First of all… the highlights:

For more details and images… You can read our entire coverage after the jump.

TFW2005, the best for you… always!
Before the event, we were entertained with some 80s Jazz (no, not the transforming robot variety… the other musical one). Certainly would have loved to hear iconic theme music from Hub TV Shows like previous years; but oh, well…

First to speak was Brian Goldner; President and Chief Executive Officer of Hasbro. He was introduced by one-the-only… Debby Hancock. Mr. Goldner talked a bit about financial situation for Hasbro back in 2012. It’s not bad, but Hasbro could have done better. Overall, it was a good year for Hasbro. Hub is doing extremely well. You can take look at some of the statements attached with this post. We are glad to hear Transformers will receive more interest from Hasbro.

“Let me highlight to you some of the new brand initiatives for 2013” said Mr. Goldner. “We are completely re-inventing Transformers and it’s called Transformers: Beast Hunters. Speaking of Transformers If we take a look at the revenue history of the brand, a few key facts emerge. First when we started this brand it was much smaller that it is today. That was before we created our blueprint to activate our brands. Transformers was the first brand we fully activated and now revenues are twice the size they were that times. Second, you can see the impact of global TV. Our strategy for Transformers is 10 percent bigger in 2012 than 2010 where we didn’t have television following the movie.” That brief review of what happened in 2012 was followed by what’s heading our way by John A. Frascotti; Global Chief Marketing Officer, Hasbro.

Whoa! Mr. Frascotti acknowledged “Bronies”; thanked them for being great fans. My Little Pony TV Movie announced. He also mentioned that there will be a New IP for My Little Pony: Friendship Is Magic. This new IP is for Older Girls; Teenage and above. The name of the IP will be revealed at a special “Pink Carpet Event” at San Diego Comic Con 2013. My best guess is that this is the rumored “Equestria Girls” trademark.

Littlest Pet Shop next. Nothing new.

Furby next. UK Toy Of The Year… Congratulations Furby.(*I gotta get myself one of those*). Looks radical. “Furby Boom”; next generation of Furby coming to US this year.

“Our Transformers: Prime television show is now broadcasted in 182 countries around the world as well as streamed digitally said Mr. Frascotti. This year we are introducing two big new initiatives for Transformers; The first is called Beast Hunters and it’s a whole new story that will drive across all products, all entertainment, all licensing. A real focal point for us. The second is an entirely new segment and a new play pattern called Construct-Bots.” Those who were at the theater, were treated to the reveal of Transformers: Beast Hunters.

“To support this new IP we have developed cross category Beast Hunters Retail Programs that will feature broad array of our toys as well as Licensed Lifestyle Products.”

Going forward to Construct-Bots “The other major Transformers initiative is a launch of all new way for kids to play with Transformers called Construct-Bots. We know from the modern boy research, that boys love customization and creativity of building. So based on this insight, we are giving boys around the world a whole new way to construct and to customize their Transformers and still convert it from Robot-to a Vehicle-and back to a Robot. This fresh new platform converges construction, action figures and Transformation with hundreds of pieces allowing for limitless customization. It is worth noting they are simple to build and easy to convert.” This was followed by Marvel Assemblers – Iron Man, Bayblade, Board Games, B-Daman and Magic: The Gathering. Which was then followed by Kre-O. At the Q&A Session Brian revealed that there will be a New Transformers TV Series developed and aired exclusive for Chinese Transformers Fans.

“We have Transformers: Prime in China” said Goldner. “And we are also developing a new TV Series for Transformers indigenous to the Chinese Market. Transformers is one of the popular brands there. The brand was there in the 80s so we are making a Brand New TV Series that is produced in China with Chinese partners and will air in CCTV [China Central Television].”

And with it, concludes TFW2005 Coverage Of Hasbro New York Toy Fair 2013 Investor Event. Our News Crew is over there at the Fair Grounds amidst the terrible weather to bring you news and images as they happen. Make sure you tune into TFW Network Sites tomorrow onwards for our full coverage of New York Toy Fair 2013. 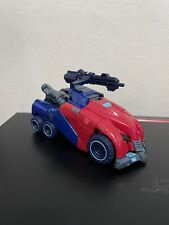 Why is TFW getting scooped by toynewsi when it comes to all things ToyFair and Transformers?? Something is very wrong with this picture. Perhaps the snow and harsh weather conditions in NYC have done more damage to the TFW staff then we think??

Goddamn hasbro, just goddamn, My interest was going away, but that damn metroplex, you got me back!

so we are apparantly getting stealth bomber megatron from idw, TRAILBREAKER!, voyager blitzwing!

i wished blitzwing was a deluxe to match astrotrain and octane, but i ain't complaining

Soundwave to come with all the cassettes

Why is a deluxe Dreadwing coming out?

IDW doing a beast Hunters comic. Generations at the end of the presentation

One thing is bugging me though. There is always an announcement on TFW the Saturday before Toy Fair starts that they are attending the preview night and will be posting photos. This year…nothing. It is kind of concerning to me. It would be great if someone from TFW could confirm that we will get photos from the Hasbro event today.

TFW's people probably can't get to it through the blizzard.

Ben Yee is there, though: https://twitter.com/bwtf_ben TFU.info too. No idea about Seibertron or Allspark.

I think it starts at 12:30 PM EST or 1:00 PM EST, pictures usually are shown later. Last year there was a stream going on at UStream, so hopefully they will do it this year!

One thing is bugging me though. There is always an announcement on TFW the Saturday before Toy Fair starts that they are attending the preview night and will be posting photos. This year…nothing. It is kind of concerning to me. It would be great if someone from TFW could confirm that we will get photos from the Hasbro event today.

NY and NJ are pretty good, actually. So people can make it. I hear the roads are clear in Brooklyn and several highways as well. Which should make it easier.

If anyone can make it through the blizzard!

Should be starting shortly then.