“We’re doing a complete reboot of the Transformers. I did a movie with Michael Bay called Pain and Gain, which comes out in April. And we had an amazing time together and really hit it off, and he said ‘Hey, you want to do this other little movie I’m doing?’ Because that was a little movie, and I said ‘Yeah, I like doing little movies.’ And he said Transformers. Whoa! You know what, we had such a great experience, I’m in.”

This statement conflicts with what the Director; Michael Bay told us not too long ago. However, the statement may also refer that they’ll be going in a fresh direction rather than a reboot as the name implies.

The episode is now available online and 2005 Boards Member Albershide instructs us to skip to the 25th minute to hear what Mr. Wahlberg has to say. 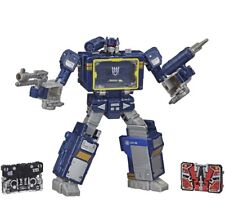 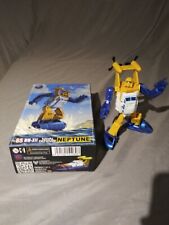 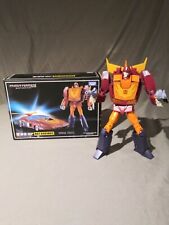 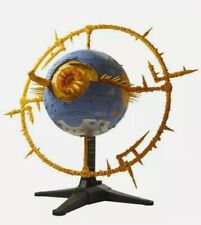 He doesn't know as much about the film as Bay does. I guess he got his terms wrong.

This is sophistry (about "reboot"), guys, do not play with words!
Wahlberg impresses as serious man. I guess he got the role of the main military.

He doesn't know as much about the film as Bay does. I guess he got his terms wrong.

You're misreading my post. I'm not assuming that. Although I don't think it's out of the question.

Josh said, "Maybe 'reboot' means this, in this case." To which I replied that reboot doesn't mean that in any case… But that some people in Hollywood do mistakenly use it to mean that. All of which is true. Nowhere did I say Marky Mark was one of those people, although again, I wouldn't rule it out, either.

"Reboot" and "reimagining" are two words that get used not only interchangeably, but also when neither of them legitimately apply. Yes, Marky Mark might know what he's talking about. But he might also never have watched the previous movies and have only a passing knowledge of them. It's not necessary for his job in the new movie, and it's not unlikely he has zero interest in Transformers outside of work. So if you are assuming that his statement is 100% confirmation the new movie is a reboot, THAT is the ridiculous assumption of the thread.

Yeah, sorry for singling you out like that. It was more of a general answer to a bunch of posts.

As far as shooting time goes…

wasn't Revenge of the Fallen shot in roughly 90 days?

Maybe his part is smaller in it, and therefore he doesn't need as much time to get his stuff in the can. ROTF was a truncated shoot due to the fact that they had to go to production with an incomplete script. It was inbetween drafts due the the writers strike, and frozen in place as a result, but production had to roll forward, hence the big the shiny turd we got.

wasn't Revenge of the Fallen shot in roughly 90 days?

Fool me once shame on you….fool me twice shame on me…fool me three times. we're pretty damn gullible.

Yeah we are lol

It's not a reboot. It's a re-hash.
Using leftovers to create another dish. That's all.

I saw the trailer last night for "Pain & Gain", Bay's next movie.

I looked at everyone's faces as they asked "what is this shit?"

I replied: "what to expect for Transformers 4".

by reboot, he actually means, quite literally, michael bay, has rebooted his computers.

I think for Micheal Bay reboot the computer means to kick it again because someone broke his fire wall and stole another script.

Seibertron doesn't know what reboot means either. On their front page they're like, this directly conflicts with director Michael Bay's statement blah blah blah. Real good reporting there.

Reboot is a terrible term for movies regardless. If I reboot my computer or phone, it does not come up with an entirely new operating system and set of apps. It's a computer science term and doesn't really make sense in reference to films.

Oh it is logic in the term you said: they reboot it, same continuity, some of the old bots and a new story, such a kind of an update

by reboot, he actually means, quite literally, michael bay, has rebooted his computers.

Reboot doesn't mean a different universe either. Batman Begins is a reboot to Batman 89', but both of them were set in Gotham. They may have had different lores, but the term 'universe' mostly refers to setting. Different movies can have different 'takes' of the same universe. If there is ever a Lord of the Rings reboot, it'll have a different take (maybe), but still set in Middle Earth, and hence, the same universe.

No and wrong. Batman '89 and Batman Begins may both be set in 'Gotham City' but they are VEEEEERRRRRRRRYYYY different Gotham Cities. They are definitely set in different universes. You can say alternate universes or parallel universes, but the point is that they are not in the same universe. At all. They don't share the same timeline. If they shared a universe, you'd be able to say one happened before the other. The events of one movie would be history of the other. But as we know, that isn't the case.

And no, none of the various takes on Middle Earth… Jackson/Bakshi/Rankin-Bass/whatever else take place within the same universe. Jackson's movies exist in their own shared universe, and everything else has its own. Same setting does not equal same universe. You have that exactly backwards.

I don't think "reboot" is the right word. That would imply that it takes place in a different universe than the last 3 movies. What would be a better word to describe it?

Reboot doesn't mean a different universe either. Batman Begins is a reboot to Batman 89', but both of them were set in Gotham. They may have had different lores, but the term 'universe' mostly refers to setting. Different movies can have different 'takes' of the same universe. If there is ever a Lord of the Rings reboot, it'll have a different take (maybe), but still set in Middle Earth, and hence, the same universe.

Almost. But less entertaining. I suppose all TF4 news could remain unreported until after everyone has seen the movie.

Wait and see, wait and see.
And then we'll see what this will be.
It's too hard to say right now.
What will happen, why and how?

Did he whip his large rubber junk out too?

Why don't they just take out the swearing, inappropriate humans? Make the transformers fight on cybertron, WITHOUT ANY HUMANS.

Because it's much cheaper to film humans written to specifically annoy you than it is to make an entire movie with the overly complicated TF designs and massive explosions that Bay insists on having.