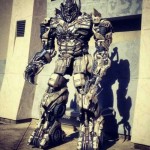 Here’s a story for the Decepticon fans – a new walk-around character has debuted at Universal Studios Hollywood, and he’s rather menacing! Yes, Megatron from Transformers Dark of the Moon can now be spotted stomping around Universal Studios Hollywood to promote Transformers the Ride. He joins Optimus Prime and Bumblebee as walk around characters that park guests can have their photos taken with.

Check out the original report at Inside the Magic. 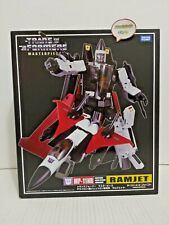 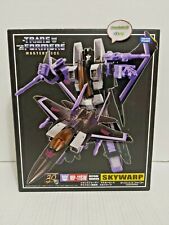 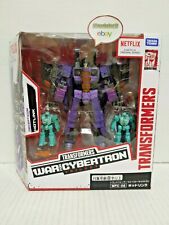 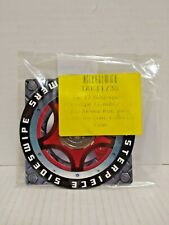 OH MY GOD! CALL RATCHET! He's been infected by Shrapnel!!

I hope they bring them to Orlando when TF: The Ride opens there.

Yes please. I plan on going when I'm in Orlando in November and I'd love to see all three costumes.

Pretty nice. Its definitely the dark of the moon model with the wheels and the chains.

I guess a cloak would have obscured the model's reconizeable quality as movie megatron and may have hindered the actors visibility.

Its pretty nice. Maybe we'll get a bot con down there again so more fans can manage the trip.

Wait.. he's fixed on the ride… but the costume is of TF3 beat up Meg's.

next day in the news: "Local amusement park mascots brawl, man gets spine ripped out. More at 11."

I was thinking more along the line of….."Owwwww, faces everywhere"

Honestly, it just doesn't seem like a Megs thing to do…walk around with insects….that's so beneath him.

next day in the news: "Local amusement park mascots brawl, man gets spine ripped out. More at 11."

I hope we get these in Orlando when the ride opens

Wow, it's scary to stay close to him

I wonder, how does he interact with Autobots?
In general – awesome!!!

No worries. Megatron's kryptonite is apparently comely smack-talking human females. Stick close to one and you should be alright. =)

I wonder how tall it is though!!

Geez. Not even to scale

Pretty cool costume, especially when you consider it has to be safety checked and everything

Wow, it's scary to stay close to him

I wonder, how does he interact with Autobots?
In general – awesome!!!

The ride itself features ROTF tank tread Megs but the walk-around costume is of DOTM Mad Max truck Megs. Odd. Still, very cool costume and I always loved his DOTM design from the get-go. Really wish there was a Leader class or even DMK model kit figure of the character from DOTM.

Wait a second…isn't he dead? I know in the movie-verse megatron never stays dead, but come on! At least wait until the 4th movie!