Our friends and sponsors BigBadToyStore are expanding! The online-only store is making the big transition from an online-only entity to a full-on retail store as well, attached to the BBTS warehouse! According to the article in New Richmond News, the move will also allow BigBadToyStore to carry product lines from vendors who will only deal with retail stores – as well as giving local toy collectors the option to collect their piles of loot in person! 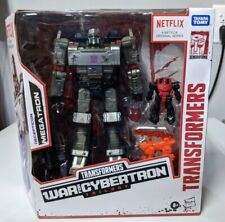 I was planning to call them. I thought someone here may have been there already and could describe the store.

Has anyone been to the BBTS retail store mentioned in this thread? Do they allow local pickup of pile of loot orders?

Probably best to just call them during business hours and ask them yourself.

I couldn't find a current thread discussing the news in this thread. Just looking for an update.

Has anyone been to the BBTS retail store mentioned in this thread? Do they allow local pickup of pile of loot orders?

Once BBTS offers store pick-up, large packages of Piles of Loot wouldn't have to sit outside my door with the risk of being stolen. TFSource have a warehouse in Forest Lake that is only minutes away from the BBTS Warehouse in Sommerset.It would be nice to pick up items at TFSource a well.

Personally happy, wonderful company to deal with, not a bad word to be said about them.

They're a great bunch of folks, deliver promptly and wonderful customer service for International customers like myself. Couldn't be more pleased for them, won't affect me but will be great for people that live nearby… It's obviously just so they can get particular items in-stock from suppliers that require 'shelved' items, but again, couldn't be happier for them to be 'expanding' what they offer to clients…

Don't forget for those that live in Wisconsin you'll have to start paying state sales tax on both pick-ups and shipped items. Granted in some states you're supposed to pay sales tax on all online purchases whether there's a physical store in the state or not, but that's a different story.

Either way, good for BBTS. I always like to see small businesses do well.

Wisconsin residents have been paying sales tax on all BBTS orders for years now, regardless of pickup or being shipped.

Likewise, anyone that comes to Wisconsin to pick up their items will pay 5% of the total in sales tax.

For Wisconsinites, it's not a difficult decision. If you have a large Pile of Loot that you're paying tax on anyways, you may as well avoid the shipping fees and go pick it up.

For Minnesotans and other out of staters, the question is whether or not the shipping cost is more or less than the 5% sales tax. If it is more, you go pick it up, if it is less, you still have it shipped.

Throw one of those bitches my way. I'll stop by every Friday.

Don't forget for those that live in Wisconsin you'll have to start paying state sales tax on both pick-ups and shipped items. Granted in some states you're supposed to pay sales tax on all online purchases whether there's a physical store in the state or not, but that's a different story.

Either way, good for BBTS. I always like to see small businesses do well.

Even if it's still primarily a warehouse, they serve to make money by opening it to the public, even if they don't intend to be a full on "walk in a see shit" store. They'll get better supply, make a few bucks from local customers, and of course benefit from the advertising this is getting.

Tonnes of places do this (and with quite good results), and it's probably just become common sense at this point. For anyone who's interested, take a drive down to the industrial part of your town. You'll find loads of businesses that're mostly doing business online or through multiple levels of supply chain, but they also have a place where you can go in there & physically get things.

Wow, I can't believe so many people are confused about this. Unless something CRAZY happens Joel isn't looking to start a chain of stores. This is nothing but a STUNT to skirt some suppliers (like Sideshow) that have rules for their accounts that say the companies they agree to wholesale to must have a physical retail store. It's because many of these companies (again, like Sideshow) do their own sales online and don't want to compete in that arena. A friend of mine had his Sideshow account revoked when they decided he was doing too much of his business in online sales and cutting in on their turf. When I openned my account I actually had to send them pictures of the front and the inside of my store before they would even consider me. So this is almost a dummy office, I doubt BBTS really even wants people going there

Funny I undercut BBTS on alot of their items. Opening a store is not a good idea in this society to be honest with you. They should keep to online business as RETAIL does not really work. I had worked in a comic shop selling toys back in the 90's and to be honest with you everything I picked up for sale is still sitting there 12 years later.

If there's enough of a local market & if the people running it have enough business sense, then opening a physical store could be a good thing. I get what you're saying (and there's a store in my area too that's failing), but it's doing bad because it has neither of the needed qualities (good business sense or a good local market). Simply citing "this society" isn't a good enough excuse because if it was, we wouldn't have any brick & mortar businesses which we do. Actually, even the local market shouldn't be blamed because there's another store in my area that's been doing great for years, meaning that even more weight falls on the losing store for choosing to do nothing except accumulate things that never sell & destroy the chances of turning his existing inventory by charging upwards of 4 or times its market value & probably paying way too much for it as well.

Exactly the same for me. I hope they expand all the way out here though one day, or that I get a couple better "nerd stores".

Well, there's a good amount of places in & around the Vancouver area, and there's always Quantum Games & Dragon Cards in our city. Not that either of those really fill the TF void, though.

Also for what its worth, I seem to recall a place in Vernon called Ebeneezer's, but I've never actually been there & have no idea how they are. There are also a couple of pawn, sports & comic shops in Kelowna (I've gone there before to buy wrestling show tickets), but I didn't remember seeing other than that when I was there. One of em has a good amount of plastic model cars, though.

If it's anything like the warehouse/retail store of newegg or mwave then it's really nothing to be excited about. There's really nothing to see and it's a bunch of people waiting around waiting for their orders to be fulfilled. Also at mwave they charge you $5 convenience or pick up fee for coming to the warehouse instead of just having it mailed.

People seem to be getting "small retail store" confused with Full Service Toy Store. I've been there in person. It's a very large warehouse with a small front office for customer service.

The original building is closest to the road its on with the 1st expansion following the parking lot that runs perpendicular to the road. The 2nd expansion can only go further west or further north. Chances are, that the office closest to the road will be slightly expanded and converted to a small retail space where people can place an order in person or pick up their Pile of Loot. Previously, BBTS frowned upon pickups (except in special occasions). With this change, that's no longer a problem. It's really convenient for those in the Twin Cities/Western Wisconsin area if they want to avoid a large shipping charge on their Pile of Loot.

For the record, I don't believe this is the start of a Franchise that's all of a sudden going to compete head to head with Walmart and Toys R Us. So the "Bring BBTS to my state" talk is just wishful thinking.

Pretty neat. It would be nice if a Botcon happen there so we could take a tour. I could imagine maybe another location or 2 opening within 10 years IF this does good for them, but my hopes for a Albuquerque location are slim to none.