Planet iacon has updated their Facebook page again with a slide from the Cybertron Con in Singapore. This slide shows the two new toys for Evac, our hero (and transport) for Transformers The Ride. Along with the previously seen legion size toy, is the deluxe version of the character in full color. This toy will be available to purchase in the gift shop at Universal Studios. No word yet on a mass release.

Check the image out by clicking the title bar. 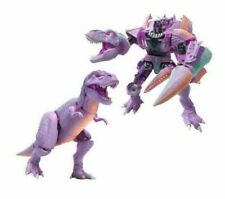 I'm hoping this finds its way to Universal Orlando so I can get one. Of course I'd like the ride there as well, but let's start with the toy.

Can't wait for the toy to be out soon

does anyone know if he is available in singapore too??? i want him soooo bad! and when are they going to put him as an exclusive toy in stores??

is he available in singapore??? cause i'm going to ride that this summer.

Finally Evac will be a toy soon,great

I really want this figure; I hope he shows up at retail sometime…

All I thought when I saw this was "kibble ass"

That's what his name should be. Perhaps through "Captian" in front of that.

Figure looks good to me, hope it gets a mass release.

All I thought when I saw this was "kibble ass"

That's what his name should be. Perhaps through "Captian" in front of that.

They said Evac's a 'Copter in the ride…

No they didn't. He's the car you ride in.

Pretty sure you're right that Takara is largely Japan and that much of Asia actually gets Hasbro stuff. But I'm not positive either.

Yes, it is true. All of Asia and Australia gets Hasbro Transformers besides Japan. TakaraTOMY releases are mainly meant for Japan. There are exceptions like Thomas the Tank Engine toys (I saw them in English language packaging). I believe there is a western TakaraTOMY branch but they do not distribute Transformers products.

This practise is not exclusive to TakaraTOMY, most Japanese toy companies do this. They produce a Japanese version for Japan and an International version for Asia. There is usually no difference between Japanese and Internation version besides some stickers on the box labelling them as Japan/International version and where they are distributed from. However, some toys do get distributed to the West like the Bandai SHFiguarts and Rockman X D-Arts series.

Japanese versions tend to sell for a higher price because of common misconceptions that they have better quality. While this is not entirely untrue, it is usually only true if the toys are from different batches. For the first release they are usually the same. For example, the Bandai Asia Deluxe Gao King (Wild Force Megazord) that was released in 2003 is actually the US Wild Force Megazord packaged in Gao King packaging.

Sometimes Hasbro Asia also releases TakaraTOMY boxed products exclusive for the Asia market like the highly sought after Jetpower Optimus set. I am quite sure Japan did not get it in regular retail. Japan only got the normal Buster Optimus Prime.

This may be a generic statement, but it looks like another movie figure to me. At least I don't care about it enough to worry about trying to import it for a ridiculous cost. There ARE some figures that I'd do that for, but this is not one of them (and for the record, neither are the BotCon figures).

I can't remember the source (I think it was an interview with a designer) where it was mentioned that Evac's robot mode is a heavily-modified version of Roadbuster's design, so the resemblance is not surprising. no resemblance at all…

The sad part is the CVC & DLX molds both use the EXACT same transformation as the respective Roadbuster toys (except the DLX seems to have a calf rotation added/removed).

They said Evac's a 'Copter in the ride…

Evac? Meh. Yet another bayverse figure I can live without.

They seem to being going for Brand recognition over availability…. surely enough people visiting the ride would know they'd never seen a Deluxe Leadfoot before – and would also know they had seen Bumblebee ?

I agree with you on the Bumblebee front. Lets face it, he is now the poster child for the entire franchise. However, Leadfoot is a bit different. You have to remember that many of the people going through the ride will be parents and children. They probably will not be able to distinguish Leadfoot from the dozens of other toys in the line. As for the kids, Leadfoot didn't really have that big of a part in the movie and is probably not high up the want list.

What the heck is this thing supposed to be? That alt mode just looks dorky. Since it's heavily based on Roadbuster, and Roadbuster was a pretty bad toy design, I shall not regret this one being an obscure exclusive.

Isn't it odd that they decided to sell (so far) just Optimus & Bumblebee as Store branded toys – when they had an ideal opportunity to have a chance to actually release the Hasbro version of Dlx Leadfoot too as well as a Hasbro carded version of Silver Soundwave and Wheeljack/Que in blue.

What do you mean by that, the store exclusive deluxes? There were many more than just Optimus and Bumblebee.