Friend and sponsor of TFW2005 Red leader of Kapow Toys has shared with us listings for the upcoming cases of Dark of the Moon Walmart and Target store exclusives. These listings bring us one extremely pleasing new toy in the shape of a Hunt for the Decepticons Terradive remold named Space Case! The mysterious semi-clear Bumblebee and Arcee with Cybertronian symbols are also a part of this Target Exclusive assortment along with a similar styled redeco of Jazz. Other revelations include the companion to the Target Exclusive Voyager Starscream – a Voyager Ratchet, described as a Revenge of the Fallen recolor (so that’s where the 2007 Movie Voyager recolor got to…)

A big revelation though is that the Deluxe Class Dark of the Moon Optimus Prime will be a Wal Mart Exclusive. He’ll be shipped in solid cases of 8, so he’ll be plentiful at stores, but this is the first time a new mold has been store exclusive and not been part of a previous assortment of figures that was cancelled.

Check out the full listings below. We also have some low resolution images of all the new exclusives, liberated from the Excel spreadsheet by 2005 Boards member Locustreign! 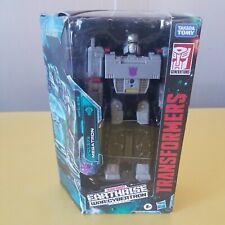 He still looks nice and it is one of the best molds of all time, but definitely loses some SpaceCase-ness, especially considering he doesn't have the right head so the colors go a long way.

It was part of a Target exclusive set, one per case, and I'm sure it sold out the minute it was released. So no, they couldn't have sold more than they did unless they made more.

I have no doubt the core design team often times comes up with better product than is realized due to other portions of a corporation sticking their noses in where they don't belong. Clearly this was a case of this – I don't think it affected sales one iota. I don't even think there were that many produced?

Interesting trivia from Rik Alvarez in a recent interview, he said the Space Case was originally designed to be exactly G2 colors. It was a marketing guy who forced the color changes to what came out, because he said it would look more space-y and saleable.

Anybody notice that the new head on Terradive looks practically NOTHING like Space Case's head? Do you think Hasbro has another wide release character planned and this is just an extra repaint for the sake of giving retailers an exclusive? Though I'm still not sure who that new head could be unless it's just a new character. I doubt they were thinking G2 Cyberjets from the beginning considering they could have done the new head to look like a Cyberjet, but didn't.

Space Case and Deluxe Prime are mine. Other than that I really don't see anything I want here.

I'll be skipping most of these, but that Jazz looks interesting! A little gold paint and some well placed flames and we've got a movie-verse Ricochet! I'll probably get that Wal-Mart Legends set as well…

As long as they're all Decepticons I feel the same way.

Lookws like Space case and Arcee come with a comic?

I want another Crosswise/Autovolt repaint in this line.

That was my first thought when I saw Terradive too. I hope they do 3-4 recolors eventually.

Same here. It's like the Crosswise mold for me, only a jet.

I'm so sold on space case. A perfect repaint for a perfect mold. I will probably pick up the deluxe optimus. Shame about the backpack on it, but i have been wanting a deluxe scaled movie prime to compliment wfc prime. The rest i could care less about.

I hope this gets release in Singapore at least Space Case, Deluxe Optimus Prime and the Legends 3-pack. I kinda wished that Jazz got his Final Battle gun.

The reason I was going to use Air Raid, was because I think he could have made for a good looking movie-styled Megatron, but without looking like any of his on-screen appearances. Sort of a "what if I could design him myself" sort of thing.

What, Megatron a wimpier plane than Starscream? Blasphemy! As for Brawl, Megatron hasn't been an even approximately realistic tank since the '90s. I've just always thought that the defining characteristic of Megatron was having a HUGE gun on one side. I'm not sure the Thrust mold supports one…although to be honest I still like that idea and am just having fun with you. (It also seems natural that Movie 1 Megatron's earth mode would be a plane, but I've always liked him as tank or "might as well be a tank" flying thing.)

Hmm, I wonder if you could get a good Megatron out of Tomahawk or Terradive.

And TakTom actually made a positive claim that Air Raid and Arcee were exclusive.

Really? If true, that really sucks. I was really hoping for a US release of that Arcee figure. The darker blue looks good on the mold, and the addition of the Mechtech weapon helps balance out her huge cannon arm.

That's a neat collection theme you have going, actually (not one to judge, we all quirk it up).

Thank you. It's one of just a few quirk's I have about my collection. Only other major one is that I like to keep my collection at an even ratio of "good guys" to "bad guys". Hasn't been too hard, but with the Autobot to Decepticon release ratio becoming more even more towards the Autobots these days, it's getting a little harder, lol.

I think if I were going to get a Megatron out of a movie Deluxe that I might go with Deep Desert Brawl though.

The reason I was going to use Air Raid, was because I think he could have made for a good looking movie-styled Megatron, but without looking like any of his on-screen appearances. Sort of a "what if I could design him myself" sort of thing.

And, um, and entire fucking case of Prime?

It's Walmart, if anything they did started to make any sense, I'm pretty sure the world would implode.

^ I dunno, does Walmart have other exclusive Deluxes? Aren't all the rest going to Target?

Definitely not a must have with all the better versions available, but I suppose he might make a decent in-scale grappler with my Bonecrusher. Still an impulse buy at best.

I am actually drooling over how it will look with Mixmaster, Bonecrusher, and maybe that new Voyager Megatron.