If you missed the TFW2005 Exclusive Transformers: Rescue Bots Concept Art news, you can click here and take a look at what you (and/or your kids) will get later this year.

Many TFW2005 members expressed their happiness regarding the upcoming toyline and said Hasbro made a very smart move with a “really well conceived” concept.

Official Description of the TV Series:
“Rescue Bots” (Hub Original Series, working title)
Inspired by the iconic “Transformers” brand, a group of Autobots, too young to protect humanity alongside Optimus Prime and his team, are partnered with a close-knit human family of first responders. Together, they learn teamwork and heroism alongside their new human friends in this animated series produced by Hasbro Studios.

Plans for the “Post-Movie Era” is well underway it seems. 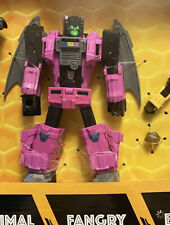 Transformers War For Cybertron Lot Of 4 Figures
$100.00
Buy It Now

So will there be (Rescue Bots: Decepticon Faction) in the show also?

I know when I saw the toy fair pics, I decided to get them for my son.

Yeah, but I don't have a kid. There goes my excuse.

Wait, two Transformers shows going on at once? You have my attention, Hub. I'm probably gonna like the Rescue Bots show then.

And it does feel a bit unfair for G.I. Joe Renegades to go on hiatus. From what other posters said, it sounds like G.I. Joe's cartoon history must have been a rocky one. Anyone want to inform me why that is? Just curious.

Darnit, now I'm gonna be tempted by the Rescue Bots toys, aren't I?

I know when I saw the toy fair pics, I decided to get them for my son.

I spot Bumblebee inspired by the movie.

Its too bad that they're not taking the oppurtunity to have the second show be a proper spin-off of 'Prime'. I'm thinking a space-based show where Rodimus or Ultra Magnus and Galvatron (as a seperate character) or Scorponok leading their respective Autobot and Decepticon teams. Basically a quasi-remake of G1 Season 3, and have had it crossover with 'Prime' down the line.

Darnit, now I'm gonna be tempted by the Rescue Bots toys, aren't I?

Prime is a decent enough show. Probably the first one since Beast Wars ended, but I'll take GI Joe Renegades over TFP any day. We FINALLY get a good Joe cartoon and it gets axed for the movies.

Just hope Hasbro doesnt frak up the comics now too. Cobra is easily one of the best comics on the market today.

I'll give the new TF show a chance, but unless/until Decepticons show up, I doubt it will hold much interest for me.

And the Renegades news is not cool at all, but I'm of course glad Prime is coming back. I know we already knew this, but still.

Man, G.I. Joe can never catch a break. There goes the 3 year plan.

Well at least this means that sooner than expected, stubborn ol' Flint may finally get the damn message that COBRA IS EVIL.

It really can't. I guess over-the-top military action doesn't jive with kids as strongly as giant robots, at least not anymore. On a side-note, I have only found one store that's actually carrying Pursuit of Cobra figures.

Okay, enough talk of GI Joe, though, or people will start telling me to take it to Hisstank.

Rescue Bots seems to be more of the G1 brick style Transformers, from the looks of the figures at Toyfair. Though I wonder if there will be any cameos from some of the more established Autobots (Ironhide, Ratchet, Prowl, Kup, Grimlock, etc, ala Young Justice) and the Decepticons (Megatron, Starscream, Skywarp, Thundercracker, Soundwave, etc)

Well, here I was ready to be excited about another Transformers show, but I'm really upset now with the news on Renegades.

Well, I want a GI Joe cartoon, but Renegades formula would get old and a general progression makes sense. So, I hope we see a sequel series with the actual team assembled for real. It wouldn't make sense to call it renegades anymore.

If there was ever a show that needs a reboot this is it. Renegades is amazingly awful.

Well, if those ratings mentioned previously as another poster mentioned, that's pretty sad. Though my kids could care LESS about Wonder Years and Family Ties. Though they seem to like Happy Days ok, and my little 2 year old would LOVE to see Batman if it didn't come on at stinkin' 10 o'clock at NIGHT. But ever since we even HEARD about The HUB network, it's just not doing what I'd have thought they would… well, "do". They have so much property and licenses… I'd be showing only 1 episode of Happy Days (not an HOUR), only show Family Game Night ONCE a day, not 4 reruns throughout the day. I mean, we've yet to see Beast Wars… ok. Before I continue to ramble…here's a list of what the Hub's line up should be on a near daily basis:

Mornings 5 – 10 all the kiddie shows, Fraggle Rock, Wot Wot, etc.
Strawberry Shortcake (new AND original!)
Twisted Whiskers (though I could do withOUT that show) a show based on… holiday cards? I mean really… they blatantly steal so many Looney Tunes and Tom & Jerry stories I don't see how they get away with the plagarism
G1 TF
GI Joe (evening, not near midnight!)
My Little Pony (new AND the original)
Pound Puppies (new and the original)
Family Game Night in the evening
Actually they need to settle a Tranformer slot… they need to use Unicron to be able to Show R.I.D. And each day of the week during the SAME TIME slot, play an episode from a different TF series each day, with Prime on Friday, like normal. (G1, BW, BM, RID, Armada, Energon, Cybertron)
Quantum Ray at a better time
RL Stine in the late evening
some of the older retro shows maybe in the early afternoon… etc. They need to fire the stinking program director! We can only take so much Family Game Show and Dan Vs.

I mean they need to have Batman Beyond, Deltora's Quest, (pick a TF series) and GI Joe all together…all close together, NOT super early in the morning or super late at night. I mean they whole reason they can play TF G1 is because it's on so LATE? and politically incorrect? Gee, how many fans of us HERE have really dismembered another fan because we watched G1 in the afternoon growing up…

But I'm stoked Prime is going for another season, I didn't doubt that for a nanosecond.

Cool that TFP is go for another season. Now we just have to hope it stays good and doesn't randomly degenerate to shit before then!

I haven't watched Renegades but man GI Joe never gets a break. I hope they make another show like GI Joe Resolute. That was awesome.

Not really a Joe fan myself as cancellation, hiatus, etc has no effect. All I'll say is they could use a rub with an onscreen Transformers crossover as the comic crossover has been done to infinity.

Indeed a first to have simultaneous Transformers series in production. As the person who posted the Youtube vid of the Playskool Gobots intro has shown, there is some reason to worry. I'm kind of concerned there will be an actual TF series I wouldn't want to watch myself if it's not so different from those horrid Gobots of some 7-8 years ago.

The franchise is red hot over the last several years stemming from the success and profitability of the movies. While i hope the movie franchise continues forward, I'm thinking too many series at one time could be bad. Hope to be wrong though.

GI Joe Renegades ending is a shame, but maybe they'll pull a Unicron Trilogy and have the next Joe show be a sequel to it, with them an actual unit now, no longer on the run, and trying to stop Cobra Industries directly.

I'm still hoping for a sequel to Wolverine and the X-men.

I didnt expected a New TF Show to be Made

so basicly they will be little kid cybertonians then?

my two nephews are gonna love this show