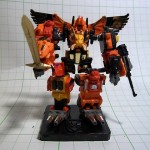 GUNG’s Borchitect, posting on the Jizai Toys website, have confirmed that for this year’s Winter Wonderfestival they will be doing a limited run reissue of their nanoscale Predaking and Arcee, plus a recolored version of their nanoscale Ultra Magnus as Powered Convoy. For those not familiar with GUNG’s Borchitect’s work, they make resin kits of classic Generation 1 Transformers characters in the “World’s Smallest Transformable Collection” scale. These third party items are produced under a one-day license from Takara-Tomy and are sold in kit form, so if you are lucky enough to acquire one, some assembly will be required. They are nice and cool kits, though.

Also on the subject of Winter Wonder Festival items, Jizai Toys themselves have confirmed that for Winter Wonder Festival 2011 they will be doing a limited run re-release of their Powerglide kit, limited to 40 pieces. If you are not familiar with their Powerglide, check out his page in our Resources section – he’s a show-accurate and highly poseable piece, in a smaller scale (smaller than a Scout when fully assembled). Because of this he is quite desirable on the secondary market. 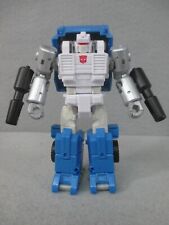 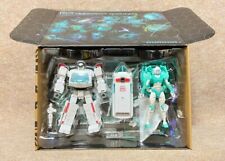 it ISN'T a KO, the person who is making this bought a one-day liscense from takaratomy

clean molding at that size is extremely hard, especially when there isn't a factory involved. This thing is a miracle at that scale.

Um, this is fan-made resin GARAGE KIT, not mass product like toy.

So that makes the poor quality and high price acceptable?

Easy pass on Predaking. I already have the Tak-Tomy version, it's all I need.

Um, this is fan-made resin GARAGE KIT, not mass product like toy.

So $240 for a nano scale Predaking manufactured by a licensee vs. $190 for a full sized, die cast reissue from Takara. Yeah, that makes sense.

Easy pass on Predaking. I already have the Tak-Tomy version, it's all I need.

I really want the Powerglide, however at only 40 units I can't see that being possible

Have these guys officially canned the Ironhide, or is he still coming out?

I remember that, wasn't it a headmaster or something? Whatever it was, it looked pretty nice, and really cartoon accurate.

Have these guys officially canned the Ironhide, or is he still coming out?

How does one order a wst predaking kit? I don't live in Japan and won't be attending the wonder festival. Anybody know of any international reseller sites?

The little King looks pretty great, but why would I ever need one? Unless you're a completionist and need every scaled version of a character available, I don't see the point.

But I totally see the reason for the steep pricing, seeing as they're going to sell about 9 of these. But those 9 guys will probably adore their little King like there's no tomorrow, as they should.

That would make a great display piece next to Fort/Grand/Brave Max.

I need this (Nano Predaking) for my wst shelf…but ya gonna have to pass on it for that price.

Kinda makes me wish that they guys that made this: Would make a WST styled Predaking. They really do make some nice clean molds!

Meh. it's cool and all but I still havent got my own Predaking.

note that they are all LEGAL product with one-day copyright approved.

I just wanted to point out, that this is true for cons in Japan. This is the only time(at major conventions) in japan you can sell a self-created work of otherwise copyrighted or trademarked work that's not your own original property. That's why it's legal. Not because any company has granted it for solely one day. So copyright approved is a slight misnomer, yet still accurate. I do really want to see what that arcee looks like though.

Say hello to my little friend!

Sounds like their earlier kits. I'd have thought they'd have learned by now