We’ve got some more Japanese Transformers release news coming to you from the C3X Hobby show! This time out we have some information on the Japanese Movie toy releases. Being released in Japan as “Autobot Alliance”, the series all in fact feature small modifications compared to their US releases. Noted variations include:

Sea Spray : his colors are brighter than the US release. In particular the gold is swapped for a more Bumblebee-ish yellow.
Ironhide : gray plastic is used instead of light blue.
Sidearm Sideswipe : As previously reported, there is no flame deco, and the windows are smokey colored.
Elita-1 : contrary to previous reports, Autobot Alliance Elita-1 is not the Arcee mold in her Rotorwash Rumble colors. It is a purple Chromia, with a more screen accurate color scheme than the US release.
Insecticon : As previously reported, Insecticon features a darker, slightly more dull color scheme that is closer to his brief on screen appearance.

Also on show was a display advertising a seven prize draw to be held by lottery through Family Mart stores. The prizes are as follows:

All these prizes were displayed except for Animated Activator Ramjet. 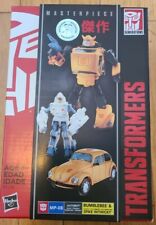 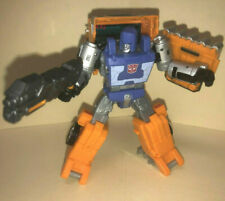 Ok, what? I see a purple Elita-1. Wtf. I see a G1-accurate Seaspray paintjob. Wtf. I see an all-silver Sidearm Sideswipe without the dumb red flames. Wtf. And I see a deluxe Ironhide and Insecticon with WAY better colors. Wtf.

And Takara continues to best out Hasbro at paintjobs. I'm so jealous!

ALL of these TakTom redecos look MUCH better than their Hasbro counterparts, IMO of course.

Kinda pisses me off.

TOTALLY agree with you. If I lived in Japan, I'd be able to have a Buster Prime for the same price!

Need to ask Bodhar for help!!

Am I destined to never own a regular version of that damn deluxe Prime mold?

I can't believe Hasbro went for those awful colors on Seaspray just to be one-upped by
takara with there genuine G1 colors,now I am gonna get rid of mine so I can order the
way hotter takara one instead.

takara gets elita-1 colros right lol, i need to get leader preim waaaaah! (never got any leader priem belive it or no

I really like that purple Elita-1. Looks so much better than the one Hasbro is giving us.

Damn, sure hope not. I hope there are a decent amount of these made. Would love to extend my ROTF Leader Prime set. C'mon eBay scalpers, be nice to me…..

So, basically, I'm gonna have to get the Japanese Sidearm Sideswipe, Insecticon, and Elita-1 to get decent decos.

Those chibi TFA figs are hilariously awesome. Especially the Megatron.

Kinda want that Insceticon with the clear wings.

Gwaaa! I literally said this afternoon in the previous news comments how much I wanted one of these!

i want that Deluxe Optimus Prime……I've been wanting since 2008 to have one without battle damage.

why did they have to make it an exclusive.

A Clear Leader Priem is cool….but i don't like clear transluscent transformers.

Wtf, Elita One and Insecticon look SOOOOO much better.

Shame I'll never even get to see one

I want that Seaspray!!!

If anyone can get me that skywarp I would be forever grateful!

Damn. I just recently bought Seaspray for my CHUG-collection and I was just wishing that it was a more of a yellow color on him than that dull golden color. Maybe I'll get another one then.