Holy TRU 3-packs Batman! Toys R Us has been throwing out the newest of new toys recently and they don’t seem to want to let up as their newest exclusive 3-pack, dubbed Rampage Among the Ruins, has been found in an Orange County Toys R Us.

This pack doesn’t include any new characters, but rather 3 deluxe repaints (two of which have been repainted several times *cough* Canon Bumblebee and Ravage *cough*) Like the Gathering at the Nemesis TRU 3-pack, the biggest draw of this set is probably that it’s the only way to get a certain deco of a specific character. In this case, it is a movie accurate deco of Deluxe Rampage in red. Now Hasbro did release a red version of Rampage by itself, however, that had very limited (and poor) distribution and was not as detailed as this version.

If you like Bumblebee, Ravage, or never got a Red Rampage, this is a set for you! 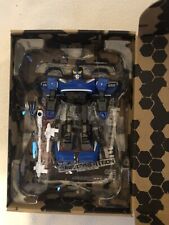 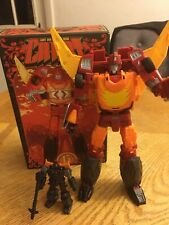 I really want this set just for the rampage. He looks great. I could care less about ravage or bee, though they do look good. But I just couldn't justify the price with all the other new stuff coming out. Maybee if it ever goes on clearance.

They are all quite nicely detailed. I like the big Decepticon logo on Ravage's chest – this may actually be my favorite deco for the figure. And of course I'm happy to have red Rampage after quite a bit of waiting. They missed the boat by not including Skipjack on the list of his aliases on the little card, though.

*Sigh* another "battle damaged" Bee. Will still get the set though, I don't have that Ravage mold yet… Might sell the Rampage though or just keep the pack MISB, looks very nice actually…

It's a nice set, it's worth it for Rampage and Ravage. I don't care much for Bumblebee though.

This Rampage looks even nicer than the Takara Desert Rampage, mainly the copper colours on the arms, pistons and legs, and the bit of black on his shoulders. Not sure which is more film accurate in terms of bot mode, though.

Cool thing is, you can detach the Takara shovel and attach it to this Rampage. I haven't seen this sets in Malaysia TRUs, though.

I just picked this up today, a lot of nice detail on them all.

Despite having the original Deluxe Ravage x2 (thanks to the Double Your Action promo), Recon, and Legends, I wouldn't mind having the one in this set.

No desire to get another Bee, though. It will either be repainted into a Stealth version or more likely get the crap kicked out of it by Leader Starscream on a daily basis.

-This deco – This version is correct and will be the most sought after for movie accuracy, except for very minor details.

let it be written, let it be done.

This new one isn't any more film accurate than the "all-red" Hasbro one. A lot of the Bulldozer cabin parts/outer panels are actually a very noticeable orange, instead of red. You don't really notice it in bot mode though. At first I thought they really mismatched their reds (wouldn't be completely unheard of)… but the more I looked at it I think I realized what they were going for… Rampage has a G1 accurate color scheme: red, orange and yellow! Gotta give Hasbro a few points for that one!

As much as I would like to have that Rampage,I'm not paying $30 for another Bumblbee and Ravage.

Might get it- may someone can custom bee into an updated cliffjumper.

I'll quite happily buy the Ravage repaint from this set, off somebody who is just after the Rampage. Seriously.

Oh, and by the way, the author didn't say anything about there being several repaints on Rampage, he was talking about Canon Bee and Ravage.

You know, really, we ought to be commending Hasbro on how good they are at getting our money. I mean, let's see. The release a yellow version of Rampage before the movie comes out, so none of us actually know that it doesn't match the one in the movie. Then they release the red deco, which I've never actually even seen in person because of how shitty the distribution was, and now they release this new version in a three pack with two other figs that NO ONE WANTS for what? $30? But people will still buy it because they want the screen-accurate rampage.

Assholes. They could have just as easily made that rampage a HftD deluxe bubble pack.

-Normal deco- Wasn't Rampage to begin with cause his was red! not yellow!!!
-Red deco – It has to be in stores to count. This never made to my area, so it DOESN'T count. Poor distribution on hasbro's part. the same with Evac as well.
-Skipjack deco – never heard of it, unless your talking about the Japan version and i don't count this version either.
-This deco – This version is correct and will be the most sought after for movie accuracy, except for very minor details.

let it be written, let it be done.

Would have been nice if Hasbro just released this as their recent free giveaway mailorder instead. I just got 3 random picks from hasbro including a second rampage. Damnit.

First off i wanna say whoever wrote this post about Rampage was repainted "several times" is an outface liar!! This makes the 3rd repaint of Rampage, but since only handful of people got the Hasbro's Red Rampage version, cause of poor distribution (like HA Mudflap) i dont count and he NEVER made it to my region for anyone to buy, so i consider this Rampage's 2nd repaint, and as for BB and Ravage they suck! plain and simple. The colors on Rampage is very very close to the Japanese version, the only difference is the blade/shovel is not detailed enough. Also, this Rampage is MOVIE accurate than the previous Red Rampage version from Hasblow.