GogDog has reviewed the recently released Ghost Starscream from the Transformers Masterpiece line. This TakaraTomy release certainly lived up to the character, as the rumor for it was confirmed, disappeared, reappeared, confirmed, showed up again, and finally the figure was released(but perhaps not in that particular order)! Commemorating the time Starscream briefly usurped Megatron then got utterly decimated by Galvatron, then turned into a ghost and later showed up in Beast Wars, this figure is cast in translucent plastic, and GogDog states that this figure is not brittle in the least and that the parts fit is terrific.

Hit the discuss bar to read more and see the complete glory of Starscream! 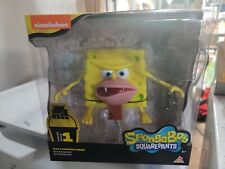 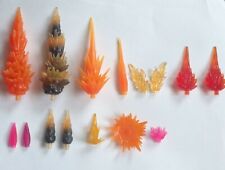 That is so purdy.

Just got mine today. I have the Walmart SS, and Takara's SW and TC. This is as good, if not better than the others. Absolutely beautiful.

Pros
I just got the figure a couple of days ago and let me say its easily my favorite MP seeker figure. Tight Joints, great use of clear plastic and just looks fantastic displayed next to my other MP figures.

Cons
The joints are almost to tight but i'm sure that will be fixed after a couple of Transformations. Also, the Jet missiles do not fit as snug as they do on the other MP figures. Its not bad but they do fall out a lot during transformation, which is a problem I don't have with Hasbro Skywarp, Thundercracker and Green Screamer.

Worth the buy if you got it!

god i want this so bad.. im glad they didnt use the super hard plastic and went with the smoother pvc looking stuff.

I'll probably cave and get one at TFcon this weekend.

i don't have a single MP figure yet; damned walmart here wouldn't drop the price on Skywarp to 30 bucks, lol.

the more i think about it, until the release of MP Grimmy, this Starscream would have been the only MP i would really want. This is such a trophy piece, a center piece.

Fort Max, Unicron, Primus, they are all neat in their own way, but they just don't have the complexity or wow factor of this mold.
and it's like owning a crystal sculpture.
i hope to get this mold next month.

I want it, but I just can't bring myself to buy it…. To many seekers with to many problems.. I just can't do it..

he is very nice. so nice that im getting another one. it's one of those decos that i need 2 of and i rarely do that.

This is a really nice looking figure, but I don't think I will be picking him up this time around.

Heh! I know. I just dropped him on the floor earlier and had a hard time finding him.

I dropped a finger when i was giving him the Purple Megs and just about lost it.

Aw man, it looks amazing! But, do I need another version of that mold?!?

Dr Arkeville is in there, he's just clear.

Heh! I know. I just dropped him on the floor earlier and had a hard time finding him.

I just got SS today and it is one nice looking toy! The only thing that irks me about this is that there is an air bubble in the null rays. Well, that and dropping Dr Arkeville. The rest of the figure is almost flawless.

Dr Arkeville is in there, he's just clear.

I just got SS today and it is one nice looking toy! The only thing that irks me about this is that there is an air bubble in the null rays. Well, that and dropping Dr Arkeville. The rest of the figure is almost flawless.

I gotta say that both of these MP's are very beautiful.The Megs guns goes perfectly with Screamer

My shipment of these just arrived today. Absolutely GORGEOUS. One of the few cases where I've taken my own copy down to the stock area for photographs. Just so I could bust the box open and have a photo of the figure in it's tray as part of the product photo, so that everyone could see how pretty it is.

This holds no interest for me as SS's ghost never wore it.

Wish his hands were blue!!!

6 pages and no one else is posting pics? is GogDog the only one that has this??

Mine is on the way. I'll throw up some when it gets here. Any requests?