[LEFT]According to the blog, Famitoy, Transformers Animated toys will be released in Japan in 2010.

Sixteen figures will be released between April and March of next year as well as five sets of twin packs.

Check out the listing by clicking here![/LEFT] 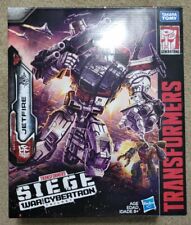 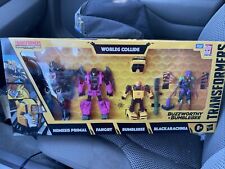 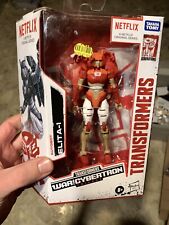 To be honest I only see a list of toys that is scheduled to be on shelf in Japan.
I don't understand why there are so many speculation on the show itself will be on air.

Personally I would like to see it on DVD instead on TV.

Generally when there is a push for merchandising, usually means that the show will follow. It helps having the product on air, because it helps awareness. Thus, increases sales. Simple enough conclusion. Another factor is the material is being released around when the Spring season of new shows generally begin. So I suspect if the show does materialize, it'll probably happen in April.

Nothing is set in stone, of course. But I suspect if the show does end up in Japan, we'll have an announcement within the following next couple of monthes. It should be noted this month that TakaraTomy will be at JumpFesta, so there is a potential chance we may find out details from then if the show is coming.

EDIT: Quick edit, but the show will more than likely not get just a DVD only release. Given the past history, most companies will not release a product, more so a television series, if there has not been a push for broadcast exposure. Simple reason is that they cannot find it profitable to do so if there hasn't been proper exposure. For example, this was the reasons explained for Black Jack's unreleased episodes and Sonic X 2nd Series, when people questions the comanies decision on releasing these on dvd. Black Jack, from what I recall, did eventually get released (due to a chance storm and broadcast as a result), but Sonic X still remains unreleased for the second series. Though, eventually got an online stream release, but almost 6 years late.

To be honest I only see a list of toys that is scheduled to be on shelf in Japan.
I don't understand why there are so many speculation on the show itself will be on air.

Personally I would like to see it on DVD instead on TV.

Like many have said. This moment can be a chance to see some missing figures such as Scrapper, Mixmaster, Dirt Boss, and Omega Supreme as well as an opportunity for Animated to continue where it ended here.

I wonder which seiyuu will voice those characters? I'd like to hear opinions.

Imagine it, Blitzwing with chrome on his faces!

Anyone expecting lots of redecos, especially into non-show characters, hasn't really been paying attention to what Takara has been doing for the past few years.

Yeah, most of the "redecos" have just been "USA Editions", which wouldn't make sense in this case since those toys are long gone from the shelves. Is that what you mean?

I'd expect upgraded paint jobs on these figures and perhaps a handful of store and magazine exclusives. I wonder if this list is going to be the whole line or if this is the first of several waves? The absence of leaders is certainly unusual – those typically are out in the first wave of Japanese lines, if I recall correctly.

Perhaps this will be somewhat like when Beast Machines was imported to Japan. Limited push on the show and a quick run through the key characters for the toyline.

Anyone expecting lots of redecos, especially into non-show characters, hasn't really been paying attention to what Takara has been doing for the past few years.

The list is interesting. No leader class and only two Activators (Cliffjumper and Dirge). Dirge is especially interesting since he's a non-show character and Japan historically doesn't do non-show characters. Beast Machines was extremely slimmed down as a line to just the show characters and one version of each at that. I'd be surprised if they got a lot of the toys we got, Oil Slick, Cybertron Prime, etc.

The inclusion of Shockwave and Cliffjumper are also easy to read too much into. Usually characters like that would be kept in reserve along with the Dinobots, Sentinel, Jazz and the like. This means that either TT is hesitant and only thinks the primary characters will sell or that for some reason they think the aforementioned will do very well and need more lead in time. (though it's also a bit of a spoiler TakaraTomy!) I would guess that Leader Megs and Dinobots will show up in the line later on.

As for the possiblity of new toys, I'm not counting on it at all. I can see Ramjet and Slipstream as redecos, but only if they put out the other versions of the seekers; heck they may stick to the Activator size for them. It would be nice to get a "fixed" Lockdown and a non-safety cannon Voyager Megs, but I sincerely doubt it.

If I had to guess at possible Repaints that they might offer via various ways… perhaps a Pink Starscream repaint, maybe a White Prowl ?

Megatron's Cybertron Voyager toy might be grey rather than white perhaps ?

Well, brand new molds are most likely out of the question, but I don't think repaints are. I wouldn't be shocked at all if they do that, Voyager Ramjet being the most obvious. Hell, I'd be cool with a straight BB repaint into Cliffjumper, same head and all(they were pretty close anyway).

It could be that their product list is not complete I see that a lot when the new Super Sentai series comes out.

But looking at the list seems like that Cliffjumper is a deluxe figure, the point I was trying to make about new figures.

You need to read that list again. The Cliffjumper listed is the activator figure. You can tell by the fact that it's not at the deluxe price point.

Doubt it. If anything Japan tends to make their TF cartoons skew younger if anything, based on Beast Wars dubs. TF:A is already light and kid-friendly (without totally losing 'edge'), and has more shout-outs to past Japanese TF stuff than many Japanese series do.

I can see added pop-music intros, attack call-outs, and jokes/cultural references that don't translate being re-written. Nothing else needs doing. That doesn't mean a lot of unnecessary crap won't get thrown in – It's happened enough times on dubbing work going either direction.

I really do like Japanese 2 packs. Usually, the box art (and the box) are much better than what we get in the States. If the boxes and cards are really different and look better, then I will have to pick these up.

Of course, I would imagine there will be some repainting- look what Takara did with the Beast Wars Returns series!

So by G1 Japan you mean the characters will have Flanderized personalities, will call their attacks, and be bland, interchangable yes men to Optimus' bland General Patton?

And the Decepticon variation would be everyone being idiots to Megatron's Rita Repulsa?

Remember, kids – Optimus Prime was a kid JUST LIKE YOU! He used to wet his bed!

they should just skip straight to season 3 there. haha

I want to see if they'll create a newly animated intro. I'm quite certain there'll at least be a new opening theme and possibly an ending theme, since…well…JAPAN!!

Oh, but I have a feeling Lugnut's personality may get translated in a very…interesting way.

great….another chance for the fandom to love this crap cartoon series…

i hope we get a sari figure. maybe a remold of arcee.

Now that I think about it, that wouldn't be such a bad idea.

I thought Takara would be laughing at that show…