Thanks to TF08.net and 2005 Boards member S250, a previously unknown, upcoming release has been revealed. The Voyager-class Starscream figure from the Transformers: Revenge of the Fallen line will receive a repaint called Nebular Starscream. The image of the figure in-package, as can be seen by clicking on the thumbnail to the left, shows packaging that is typical of Movie Voyagers that are exclusives. Therefore, it appears that Nebular Starscream will be exclusive to some unknown store. 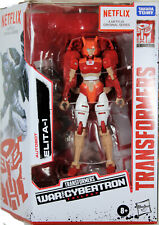 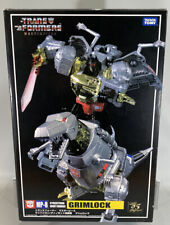 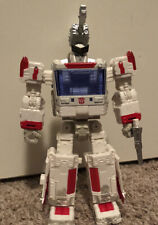 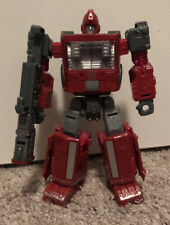 I have a K-mart near me, one is going out of business, but, the wierd thing is they got in the new ROC stuff, they have the jet but they are still trying to get as much as possible out of it, they still even had a Silverbolt but again for a tore that is closing and sayign that they will not take any of their stock to the other K-mart, they have not got theirs low enough yet, but if the other K-Mart gets these I would love to help people out.

Interesting, he appears to be more of a dark gray than brown in these photos. I might get him and turn him into Skywarp afterall.

the missile launchers do look smaller too, wonder if on this version they do pop out?

They look exactly the same to me. Only difference is that, on this version, they've been painted a different color, instead of being left the same color as the rest of the arm on the origional version. It's kinda sad that the box says "Pop-Out Missile Launchers!" when we already know that feature has been left out from the mold.

I've had some pretty decent luck finding things at Kmart that I haven't been able to find at the other stores here.
Prolly cuz no one wants to go there, but hey, I win that way.
I may look for this. Not sure yet. He doesn't look bad.

What's up with all the KMart hate? I just got Leader Optimus and Megatron for 26.99 a piece, so I'm VERY happy with them. Can't say I'm not surprised though, I haven't shopped at KMart for years!

No one enjoys Kmart.

I may like it better when I see it, If the green is more metallic, otherwise the amber cockpit and bronze gears complement the black extremely well.

He's looking more dark grey than black in those Yahoo Auction pics, but he's till awesome!

He looks brown to me. Mint chocolate Starscream FTL

This is a maybe. I passed up on the original ROTF voyager mold because I wanted to wait for a repaint. If no other option turns up, I'll get this.

this is what i was looking for. i thought exactly the same thing. a ROTF Acid Storm. i like the deco, but having one of the voyager screamers is enough. i bought him on impulse, and now i'm waiting for the Leader Class Screamer to round it all out. no more ROTF voyagers for me i think….

the missile launchers do look smaller too, wonder if on this version they do pop out?

the way they describe his bio about the tats sounds like when you power up in ROTF the game.

I found the last three Kmart exclusives with ease. Within a week of the first sighting they showed up at my store. Better distribution than TRU at least.

Good thing I don't want this. K-mart exclusives are a beotch to find.

Thats funny, cause last time I checked, the NY city K-mart still had a boat load of the 12 pack minicons laying around. I'm hoping it is the same case for this guy, though I have a feeling this will be in higher demand. I'm actually interested in owning this mold, but I'd rather get it in these colors, since I plan to get the leader class Starscream to represent his movie self.

If so, then my friend, I shall see you at Piggly Wiggly.

I suppose you will.

KMART… I still can't believe it. Next, Hasbro will release their Black Leader Prime and make it exclusive to Piggly Wiggly.

If so, then my friend, I shall see you at Piggly Wiggly.

KMART… I still can't believe it. Next, Hasbro will release their Black Leader Prime and make it exclusive to Piggly Wiggly.

i wouldve been interested in seeing it in stores…but the only kmart ive seen lately is….idk where. haha, oh well

Great, now everyone can pay like $8 more than he would be at other stores, assuming you can FIND anything in those horrible messes of a store.

Looks more of a brown than black in these pics so far, thought Legends Nebular Starscream is black.
If this one is black, though, then I'll have to buy it online, because a black-and-teal Voyager Starscream will look awesome.

Looks more brown than black to me too.

If he is actually black, I'll most likely get him (or at least try to). Find a way to change the tats from teal to purple, and he'd make a perfect Skywarp.

Looks more of a brown than black in these pics so far, thought Legends Nebular Starscream is black.
If this one is black, though, then I'll have to buy it online, because a black-and-teal Voyager Starscream will look awesome.

On Cybertron, tattoos are more than mere decoration. They can be packed with super conductive materials and symbiotic nano-machines to enhance a robot's sensors and strengthen his weapons. Starscream designed his tattoos to help him locate the fragments of the allspark, as well as extend his range and power in the air. When his new sensor net detects any ancient artifact from cybertron, they glow softly charging his weapons and boosting his energy output.